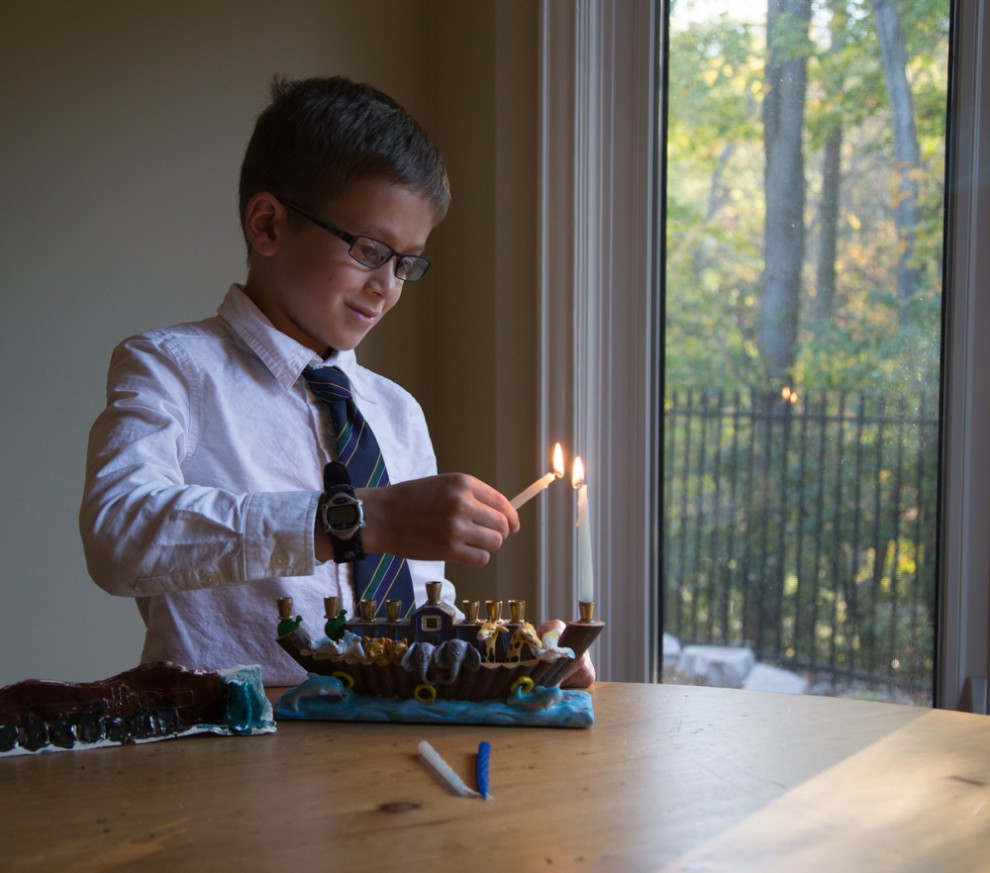 "Dedicated to every boy and girl who think they are the only ones without a Christmas tree."

One night a young boy no older than ten or eleven was preparing for Chanukah. Jacob was his name; a little boy who lived in Germany in 1940. His father was a soldier so that left him and his two brothers, Alexander and Jacob, alone with his mom. It was a hard life for Jacob during the years his father was away, with a war in his country.

So his brothers and his mother decided to move away from the conflict. They paid a man all of their savings to smuggle them across the border and past the guards into Luxembourg. When they were nearing the border, Jacob could hear the quick and sharp breaths being taken by  siblings and mother. They were almost across! Suddenly the guards had to check their vehicle! As the soldiers approached the back of the truck, Jacob knew that if the soldiers opened the door, Jacob and his family would be killed. When the guards opened the door, Jacob’s mother fought with all her might to protect her precious children, but the guards were too quick for her. The boys watched in horror as their mother was slaughtered before their eyes. What could they do? Nothing! Jacob tried to lunge at one of the guards but his older brothers pulled him back. So they did the only sensible thing: They ran far, far away. When Jacob and his brothers came to a stop, they found themselves in a tiny town in Luxembourg. Luckily, the brothers were old enough to get work and rent them a small, dirty apartment. It wasn’t much, but it was a place to live.

Jacob’s brothers were very reliable young men so they worked many jobs in hopes of making just enough money to eat every day. They also needed to pay their rent for their room but came up with almost nothing. “Please, please, please,” Jacob’s brothers begged, “in just a couple more weeks we’ll have the rent we swear!” But… no luck. They were back on the streets. Throughout all of Jacob’s life he never had much, but now he had no mother, no home, and no money.

The brothers did what most kids in their situation would do: look for their father. So they went around asking for sightings of the German resistance (yes, that is where he went). They only found one sighting by an old man who claimed to have been fishing and then heard German battle cries and a lot of gunfire. So that is where the three brothers went: to lake Echternach. “Yep, there was definitely a big fight here” said Alexander, Jacob’s oldest brother. “Guys, get over here!” said David. He was looking at what looked like a pen from a distance but then, as Jacob neared his brother, he saw it was in fact a bullet from a German gun.

“Holy crap” said Alex, “how do you know it’s from a German gun?” “It’s long and pointed like all German bullets replied David.” (Alex didn’t even want to know how his brother knew that.) Jacob and his brothers continued to scour the forest around the lake and found many resistance and non-resistance bullets. But, it turned out that was not the worst part. Jacob heard his brothers crashing through the forest looking, but suddenly… they stopped. “You guys okay?” said Jacob.” Y-yeah…”, heard Jacob. “What happened?” asked Jacob. “You’d better come here,” said Alex. Uh-oh… thought Jacob.

When he found his brothers, he saw why they looked, and sounded, so horrified. They were looking at a dead German’s body… “He’s a soldier all right,” said David. The scary thing was that he was right … the man was wearing a German army uniform.

“We need to get out of here fast” said Alex. “Agreed,” said David. So that is what the three brothers did: they went back to the little town they lived in and asked around for more sightings of the resistance. They asked many people but they all said no, until finally they met a strange woman. “Yeah I saw them,” she said. “When?? Where???” Jacob asked, but his brothers silenced him. “I saw ‘em when they were on the move. They were headin’ towards Belgium.”

And so the three brothers started the long journey towards Belgium. They gathered the very little supplies they had and paid a man the little money they had left to take them across the border in his carriage. Fortunately, Belgium had an unguarded border, so getting across was no problem. However, the problem was they still needed to find their father. They travelled day and night looking but no luck. So they did what had worked in the past. “Have you seen the resistance?” “Anyone?” “Seen the resistance lately?” Jacob’s brothers asked  over and over. Finally a group of men said they saw them and told the brothers to come with them.

The men led them to a little town just north of the border. The men continued to lead them until it seemed like they were lost. “Where are we?” Jacob asked. Apparently one of the men heard him because he said, “We are here little boy, at the resistance base.”

“Here,” the man said and pointed down a very uninviting looking alley. So the brothers went into the alley but … “Hey there is nothing here!” said Alex. They tried to leave but the men who had led them there were now blocking the exit! “How are you involved with the resistance?” said the one who looked like the leader of the men. “We’ll never tell you!” said Alex.  “You might want to rethink that,” said the man and then he did something very shocking. He and the other men pulled guns from their pockets and aimed them at the brothers’ chests. It all happened so fast. All Jacob could remember afterwards was that there were battle cries, gunfire and a lot of blood.

When Jacob woke up he found himself wrapped in bandages and lying in a bed. Both his brothers and a man Jacob had never seen were sitting on the edge of the bed “Who the heck is that??” asked Jacob.  “J-Jacob,” said Alex, “this is our father.”

“What the heck happened??” said Jacob. “Actually no, first tell us how you recognized us”?!” Jacob said to his father. “Jacob, I would recognize you and your brothers anywhere,” he said in a deep rumbling voice. “Father I-I” for some reason Jacob just couldn’t get the words out. “Shh… my son you are safe here” he said. Jacob had never felt so happy in his life. “Why don’t you tell him what happened?” said Alex. “Good idea,” said his father. So that is what he did. He told Jacob that when they were in the alley one of the men fired a shot at a support rod for a big pole and how it had fallen on Jacob knocking him unconscious. And then how his brothers had called for help and protected him. While his father and a group of men were scouting the area they heard them calling. And then he told them how they had “eliminated” them. He said they never saw it coming. They just snuck up behind them and opened fire. (There will be no more violence from this point on.)

Jacob and his brothers were safe, reunited with their father and best of all they had a home… they had a family.

And that was Jacob’s Chanukah miracle.