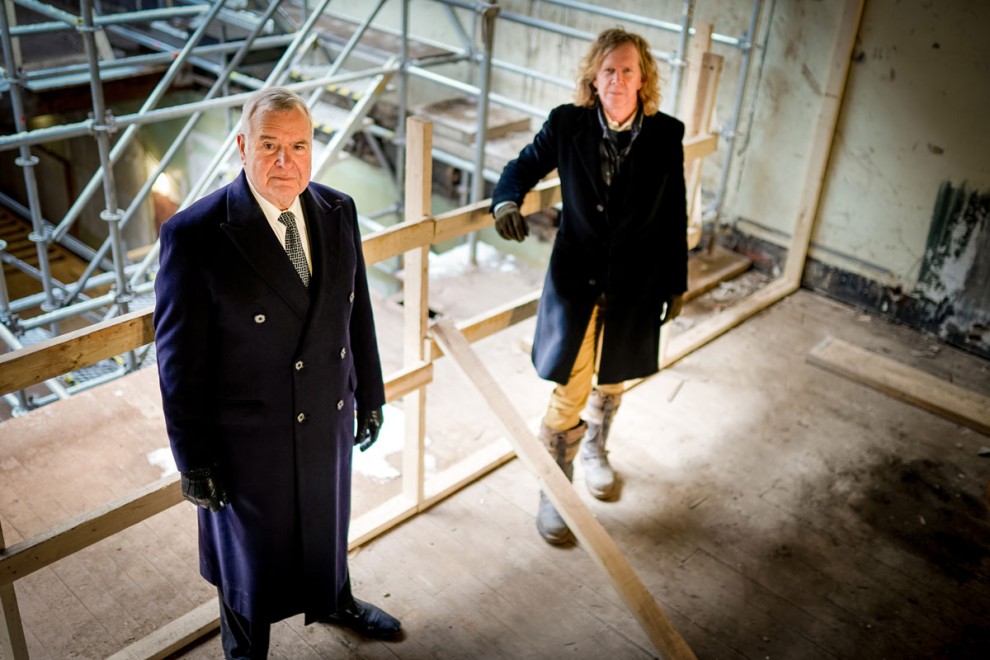 Patrick Bermingham likes to take credit for introducing Malcolm Silver to the Hamilton real estate market and jokes that, “now, we can’t get rid of him,” but the friendship between these business partners runs deep.  Bermingham is a talented artist and member of a prosper­ous Hamilton family with deep roots in the building/engineering industry. Silver is a courtly, sil­ver-haired, orthodox Jew with an Irish lilt. The two met at a leadership forum in Toronto in the early 2000s and soon discovered they shared a passion for ethical business prac­tices and values-based investment.  Bermingham  became an avid investor in Silver’s syndicate of commerical properties in Toronto, and when that market dried up, decided to partner with Silver in purchasing buildings in Hamilton’s historic downtown core.

The first building the partners purchased reminded Silver of a New York brownstone when he first saw it. The former site of Chester’s Beers of the World at 62 King S. E. had sat empty for three years. Their next purchase was the building next door at 64 King E., followed by another elegant building at 103 King St. E., which they’ve since renovated and leased to a global escape room conglomerate.

The concept Bermingham and Silver eventually settled on for 62 and 64 King St. E. which they’re calling the King John Building, is of a mixed space commercial complex that can accommodate offices, retail,  a restaurant, and weekly programs or events in its light-filled atrium.

Despite the devastating effects the pandemic has had on downtown businesses, Bermingham and Silver are optimistic that a building boom, which has shown no signs of slowing down over the last year, stands to tranform the lower city.

“The number of people living in the downtown core is going up,” said Bermingham, “and young professionals will want to walk to a restaurant and go here and there,”  said Bermingham, adding that he thinks people are “dying to go back to offices.”

For his part, Silver said he believes “fervently” that Hamilton stands to become Toronto’s equivalent of Brooklyn over the next few years, a change he anticipates will transform Hamilton into “a completely different city.”

Bermingham and Silver are hoping to find Hamilton-based investors who share their dream of a revitalized downtown core.

“Malcolm’s generated a 100 per cent return for me on everything that we’ve done,” said Bermingham. “We have confidence in Hamilton. we’re digging in and we’re digging in more. Spring will come again.”

For more information about leasing space at the King John Building or investment opportunities, visit msilver.ca.