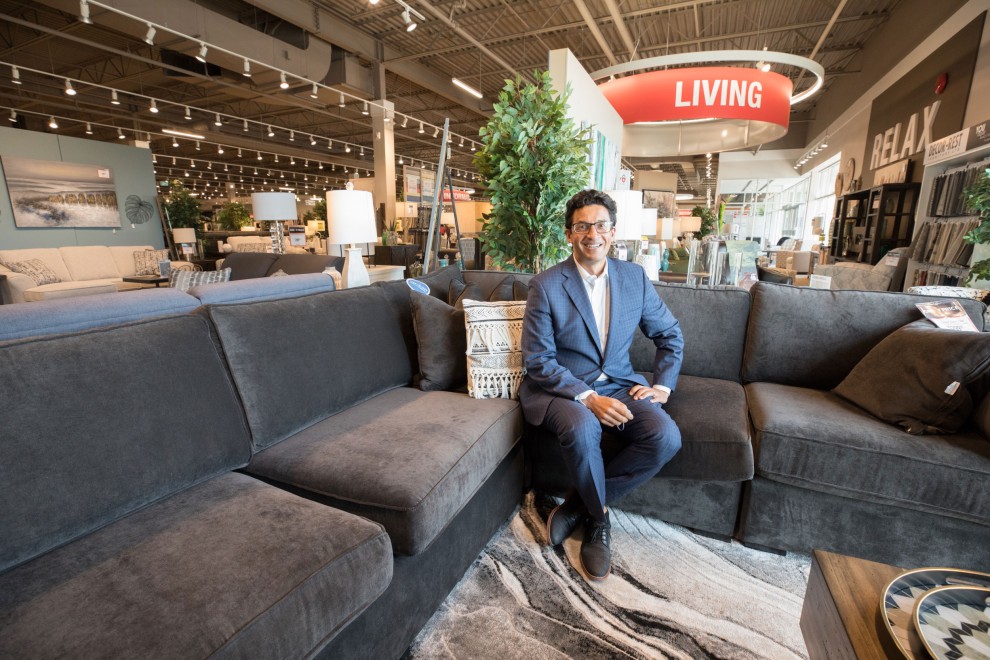 The Tepperman family story begins like many other Jewish immigrant stories from the early 20th century.  A young Nate Tepperman, fresh off the boat from Eastern Europe, headed out onto the streets of London, Ontario to make a living selling carpets and blankets door to door. It was Tepperman’s sales philosophy that would prove particularly appealing to his customers and set the enterprising young immigrant on the path to success.

“His niche was, ‘take it today and I’ll come back every week to collect a nickel,’” said Andrew Tepperman about his grandfather.

Nate Tepperman would go on to open the first Tepperman’s furniture store in Windsor in 1929, making in-house financing a cornerstone of his business.  It remains a core value of the company more than 95 years later, distinguishing Tepperman’s from its competitors and helping to make it one of Canada’s largest independent home furnishing retailers.

The family story took a tragic turn in 1970, when Nate died in a drowning accident in Florida. His son Bill, who was 36 at the time, was suddenly left to head the family business on his own.  But Bill Tepperman more than rose to the challenge, eventually expanding to Sarnia, Chatham and London.  In 2006, Bill retired, and management of the company passed to his sons Andrew and Noah who continued the company’s growth, opening new stores in Kitchener and, most recently, Ancaster.

Tepperman’s opened its Ancaster store in August 2019. The timing could not have been worse. Less than a year later, COVID-19 forced them into what would be the first of three lockdowns.

“I can tell you, honestly, the first time we shut down, I was terrified,” said Andrew, who spent the next two months on the phone every morning, strategizing with his executive team. Fortunately, the company, having already invested in its ecommerce platform, was able to adapt by putting together a new call centre and managing a complex delivery schedule that followed pandemic protocols.

Nine weeks later, customers flooded back to the store in huge numbers.

The COVID-19 pandemic was not the first time Tepperman’s had to adapt to new realities. The 2009 recession also hit them hard.

“We kind of flatlined for a couple of years after that,” said Andrew.

That was when Andrew and his brother Noah signed up for an immersive “art of visioning” course in Ann Arbor, Michigan; they emerged with a 10-year vision and six guiding principles.

“We did a test with 15 people from all different departments and everybody loved it,” said Andrew. “That was seven years ago and we have not changed a single word – same six guiding principles, same vision. It doesn’t matter if you’re in HR, in warehousing or in sales, part of your strategic plan is going to incorporate everything in that vision.”

A workplace where employees and employers work together to achieve company goals sounds almost utopian, but in putting “creating an awesome staff experience” at the top of their list of guiding principles, Andrew and Noah Tepperman join a growing number of forward-thinking businesses that prioritize their responsibility to their employees, their community and the environment in addition to profit.

Tepperman’s has contributed to its local communities in many ways, including planting a 2,500-square-foot pollinator-friendly garden next to its London store (and a smaller one adjacent to its Ancaster location); distributing $50,000 to Hamilton area charities in conjunction with the opening of its Ancaster store; providing $700,000 in post-secondary scholarships; and recycling returned mattresses.  Through its outlet stores, Tepperman’s has also helped furnish the homes of countless budget-conscious consumers.

Andrew Tepperman is quick to respond to the question of what he most wants the Hamilton Jewish community to know about his business.

“I would love people to know what we stand for, who we are, where we came from,” he said.  Just ask anyone living in Windsor.

“When you’re in a city like Windsor for 96 years, people know what we stand for. We do so much in the community and have built up a lot of trust over the years.”