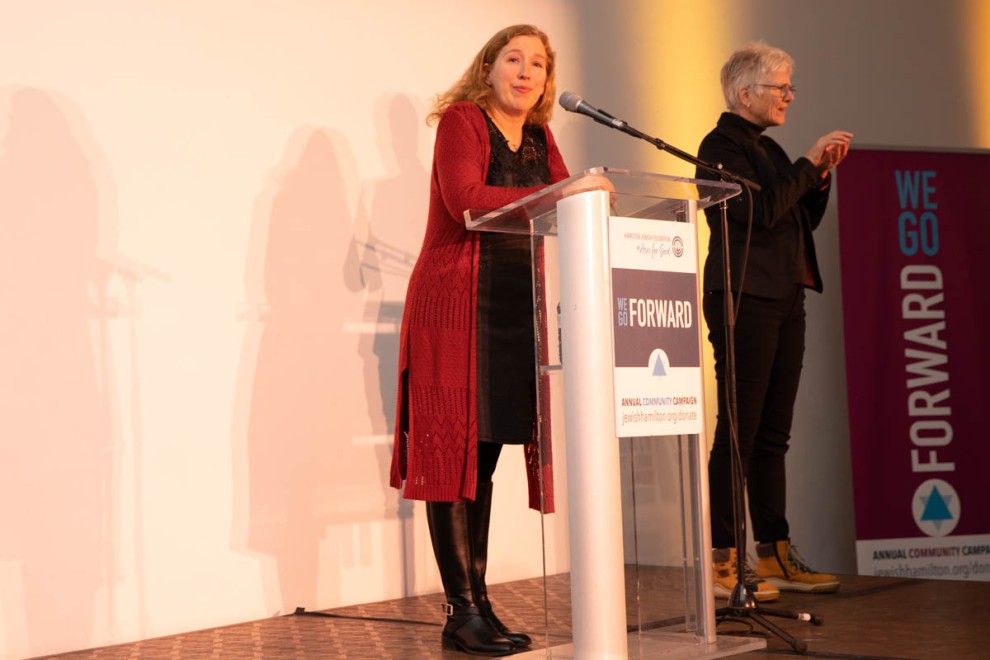 An angry torch-bearing mob of white supremacists marches in Charlottesville chanting “Jews will not replace us,” their banners emblazoned with swastikas. The following day, an anti-racism group puts out a message of support for Blacks, Muslims, women, LGBTQ+, trans people, immigrants and other minorities, neglecting to mention the very people who were the object of the marchers’ attack.  In Toronto, an assailant rips the kippah off of a 70-year-old orthodox Jew walking with the aid of a walker outside a suburban shopping plaza. A 15-year-old girl posts “Shabbat shalom” on TikTok, and is immediately subjected to an onslaught of trolls who attack her with the hashtag #freepalestine. This is the face of modern antisemitism, a subject that brought hundreds of participants and dozens of international experts to Hamilton in November for the #nomoreantisemitism conference organized by the Hamilton Jewish Federation.

The conference was the brainchild of Federation CEO Gustavo Rymberg, who first conceived of the idea after Federation established combatting antisemitism as one of its new strategic priorities two years ago. The number of hate crimes targeting Jews in Hamilton had risen to an alarming degree during the pandemic and Rymberg believed a conference about the rise of global antisemitism could make a difference. But the momentum really began in July 2021, after Rymberg participated in a virtual seminar for educators put on by Yad Vashem, and secured funding from Margaret’s Legacy, the Azrieli Foundation, McMaster University, and MASPIK! a partnership between the Centre for Israel and Jewish Affairs and JNF Canada.

The #nomoreantisemitism conference opened on Saturday night, Nov. 19 with Yad Vashem senior historian  Robert Rozett giving an historical view of antisemitism, followed by a provocative keynote address by Dara Horn, author of People Love Dead Jews. She had the audience sit up and pay attention when she declared that decades of Holocaust education has had no measurable impact on antisemitism. The problem, as she sees it, lies in the well-intentioned but misguided practice of universalizing the Nazi genocide against the Jews.

To illustrate her point, Horn pointed to the example of many Holocaust museums or exhibits including a section on other genocides and human rights atrocities. “If you go to an exhibit at the National Museum of African American History about American slavery, you don’t then enter into an exhibit that tells you about human trafficking around the world today and what are you going to do to prevent it,” she asked. “And the reason they don’t do that is because that would be turning the struggles of the Black community into a symbol of something that actually mattered. It is dehumanizing to be used as a symbol. It is even more dehumanizing to be used as a warning and that is what Holocaust education is being used for.”

Horn also questioned the wisdom of Holocaust exhibits that try to portray Jews “just like everyone else.”

“The problem with that is the Jews spent 3,000 years not being like everybody else,” said Horn. “It’s the distinctiveness of Jewish culture and experience that is so important to us. And that’s what we’re being asked to erase in order to gain public respect.”

Horn’s remarks were echoed the following day by Jody Spiegel, director of the Holocaust Survivor Memoirs Program at the Azrieli Foundation, who cautioned against teaching the Holocaust as a metaphor or cautionary tale that can be used to warn young people of the dangers of bullying.

“The use of the Holocaust as a metaphor erases years of Jewish history and realities of our oppression. We need to stand up against hate in all forms but we also need to stand firmly in our own Jewishness—both our history and our Jewish future. Antisemitism is not new and when we bend to excuse it or fear defining it, we perpetuate it,” she said.

Defining antisemitism, however, has become a surprisingly polarizing issue, given the controversy surrounding the International Holocaust Remembrance Alliance’s (IHRA) working definition of antisemitism. In an impassioned address to conference attendees, the honourable Irwin Cotler, Canada’s special envoy on preserving Holocaust remembrance and fighting antisemitism, recalled how the 2001 Durban World Conference Against Racism devolved into a hate-fest against Israel and the Jewish people and ushered in a two-decade long era of “a new, virulent, escalating, globalizing anti-Jewishness which singles out Israel and the Jewish people … for discriminatory treatment in the family of nations.”

After 15 years of discussion and debate, the IHRA Plenary adopted its Working Definition of Antisemitism, in May, 2016, a document that’s been under attack ever since by left wing groups, the same groups, says Shimon Fogel, CEO of the Centre for Israel and Jewish Affairs, from which Jews have found themselves increasingly excluded.

Given that social justice and inclusion are embedded in “Jewish DNA,” this has been especially painful for Jewish progressives. Fogel spoke about “erasive antisemitism” on the left, that requires Jews to “erase” their lived experience of discrimination and any positive feelings they may have for Israel.

“If you assert that Israel is a core part of your identity as a Jew, then you’re disqualified from having a seat at the table,” said Fogel. “But you can’t because Israel is the quintessential evil of the progressive class.”

This attitude is the prevailing one on university campuses, for which Jewish students are ill equipped to address.

“Absent an anchoring in what our tradition is, you have no ability to appreciate why (Judaism) is worth saving or why you should invest in doing the saving,” said Fogel. He says what is really needed is a concerted effort on building both Jewish literacy and a sense of pride among young people about being Jewish.

“We can’t get Jewish students into advocacy unless they have a reason to do it,” he said in response to a question from the audience. “That reason is being Jewish. First, get them to feel good about their Jewishness and to value it.”

In the days following the conference, Rymberg received an outpouring of appreciation from attendees, speakers, public school board representatives and the Hamilton Police Services, who requested use of the conference’s opening video about antisemitism in Hamilton. Rymberg says his primary goals have been met: putting Hamilton on the “Jewish map” —Yad Vashem has already invited Federation to have a seat at its annual gathering of international partners—and establishing Federation as the central address for any organization or group looking for resources on combatting hate and antisemitism.

“We dreamed about this for two years,” he said. “I’m very proud that we helped a lot of people open their minds about how to deal with Holocaust education and antisemitism in a different way.”