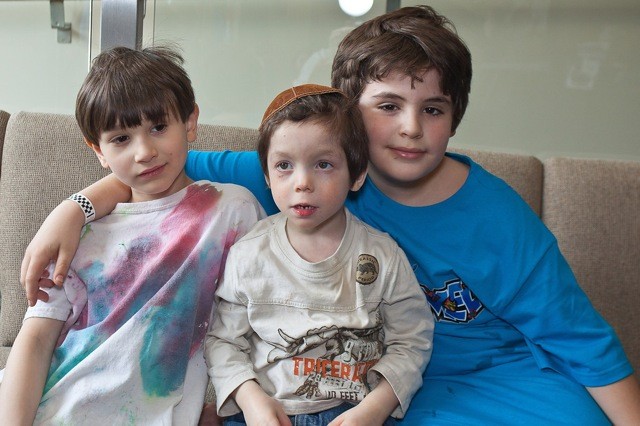 Do children with special needs deserve equal access to a Jewish education? If you answered yes, than ask yourself,  who should pay for it?

Over the last two decades there has been a dramatic  increase in the number of children diagnosed with autism or ADHD, and parents and Jewish schools are reeling from the financial burden of providing these children with Educational Assistants (EA) and other remedial assistance.  But three mothers have come together to raise the profile of the issue of special needs and Jewish education, hoping that the community at large will take up a share of the responsibllity.

It's not surprising that Milena Romalis, Karen Selsberg and Darlene Shapiro have gravitated towards one another. Parents of  special needs children share a common language and a mutual understanding, something more than evident when the Hamilton Jewish News joined them for coffee last March.

Taking turns finishing each others' sentences, the women spoke about the confusion, exhaustion and loneliness that are the constant companions to a parent of a special needs child.  Confusion, because when it comes to case managing your child's disability, there is no road map to follow;  exhaustion, because of the need to juggle caring for a special needs child with your other familial responsibilities; and lonely, because while parents of typically developing children may sympathize with your struggle, they will never really understand.

Then, there's the cost. Darlene Shapiro and her husband have spent tens of thousands of dollars  providing their son, Steven, with an EA since they transferred him to Kehila.    While  at the time his parents thought there was no choice, he no longer needs that level of remedial assistance.

"There's a specific way Steven learns," said Shapiro, "and he needed people to understand that."

The reluctance to pay out of pocket for an EA was the deciding factor in  Milena Romalis and Jason Leizer's placing their son Zev in public school when they moved to Hamilton from Toronto three years ago. But now, they too, are considering placing their six-year-old,  who has a diagnosis of AspergerÕs Syndrome, in a Jewish day school.

"While Zev was provided with some services from the autism team," said Romalis, "we have paid for speech therapy and academic tutoring privately."  Real learning, his parents have concluded, is more likely to take place in a private school setting.

Aitan Selsberg, 5, who has a global developmental delay, is entering Kehila next Fall, and his parents, Rabbi Dan and Karen Selsberg, have been assured that the school will help offset the costs of hiring an EA. But Karen Selsberg has limited expectations of what an EA can do for her child.

"An EA in the classroom means that your child receives an individualized education program, but is still doing the same work," she said. But what her son really needs is probably a complete program tailored to his needs, something neither of the Jewish day schools have the resources to provide.

The government has very specific criteria when deciding which children are entitled to receive one-on-one intensive therapy, according to  Mary Martha Starkman, who supervises special needs at the Hamilton Hebrew Academy (HHA), and even when that funding is made available itÕs not open-ended and often runs out after a few months.

As unsatisfactory as it is, the only thing that  both Jewish day schools currently offer children needing remedial assistance is an EA at the parents' expense.

"It's an incredible burden because parents are already paying tuition," said Starkman.
Kehila principal, Peter Greenberg agrees, and says the  school is looking into ways  "to ease this financial burden."

A whole other challenge for Jewish day schools, said Starkman, is that half the curriculum is taught in the Hebrew language. "We also try to provide support for that as well," said Starkman, referring to the HHAÕs annual recruitment of "B'not Sherut" - young Israeli women who do their national service by volunteering  overseas. But there's no question, she said, that finding extra funds for special needs education has been "a big funding problem."

Where those funds will come from is, as yet, the unanswered question.

"I would love for Federation to make a specific special needs allocation to the schools," said Selsberg.

Romalis said it's unfortunate that Hamilton has no equivalent to Toronto's Board of Jewish Education, an organization that educators turn to for resources and support for their special needs programs.  But she still believes that some out-of-the-box thinking could provide some relief and support for families.

"The worst difficulty when you have a child with special needs is just this rushing sense of that you don't know what you're doing," said Romalis. "You're working completely on your own to figure out which way to go.  You might see a doctor, psychologist or other service provider, but there's no cohesion in the way that these services work and there's no one you can go to and say, 'tell me what to do.' Within our  Jewish community we have social workers, doctors and psychologists. We all informally access these people but it would be so wonderful to have some kind of support network to take advantage of their professional knowledge."

Federation CEO Barb Babij is open to these and other suggestions as to how to ease the burden on parents and schools.

"Our community has an obligation to provide Jewish education to every child, and special needs children are no exception."

Babij, who has worked with autistic children, feels a personal connection to the issue. "The hard reality is that parents of special needs children are required to make difficult decisions that no parent should have to make," she said. "We need to find the means to smooth their path. While the path forward remains unclear, that we do nothing is untenable. If we can bring a bit of relief to these families, we will have succeeded."
Until then, Selsberg is intent on creating a support group made up of parents who find themselves facing similar challenges. Such a group, she envisions, will offer both the emotional support and advocacy power that she fervently believes this issue deserves.

"In the Jewish community we have a way of celebrating and really valuing academic and professional success," said Romalis. "These are the things we value in our kids." It's time, she said, that the community  turns its attention to its more vulnerable population.

"I think that the community has an obligation to our special needs children, so that a Jewish education is accessible to every child."