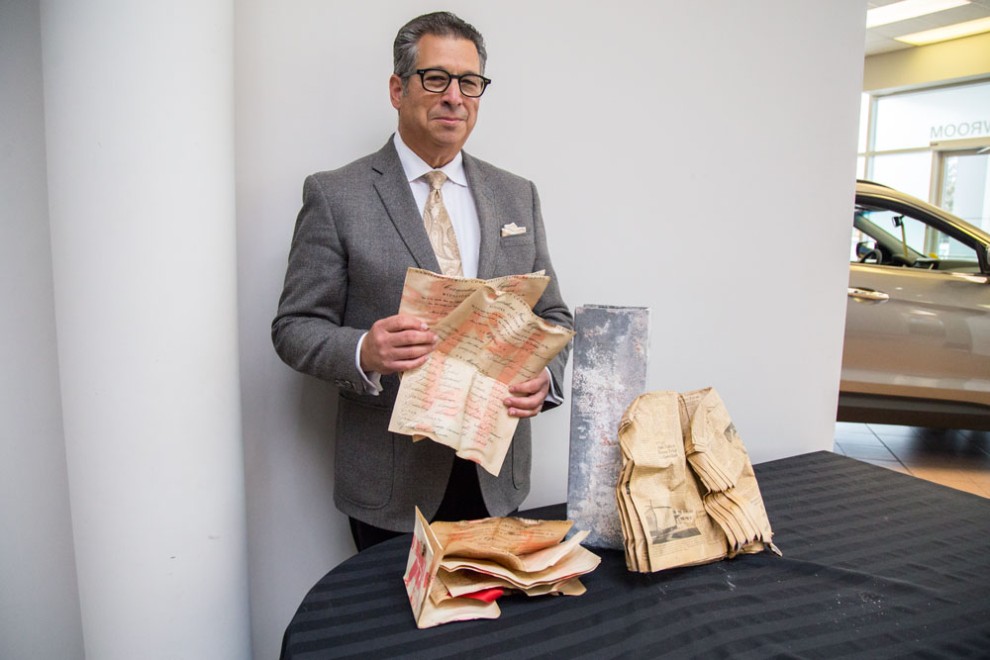 "We found something. It’s got some stuff in it." The caller was Sam Berrih, the real estate agent who represented the purchasers of the Lower Lions Club Road JCC. On the other end of the line was real estate broker Larry Szpirglas, who had overseen its sale. Driving down to investigate Szpirglas had a hunch. “It must be the cornerstone,” he thought. He was in for a surprise. Like so many Jewish kids who grew up in Hamilton during the 1950s and ’60s, Larry Szpriglas spent a good part of his waking hours at the Jewish Community Centre on 57 Delaware Ave. The building was a dynamic hub of Jewish life, offering Sunday afternoon programs for children, Saturday night dances for young adults, intercity events, concerts, sports tournaments, arts programs, and day programs for the elderly. Its legendary professional staff Sam Brownstone, Max Rotman and Bill Stern were mentors to countless young people, many of whom would go on to become this community’s future communal leaders.

By the mid-’70s, with most of Hamilton’s Jewish families having moved to the city’s western suburbs, the Delaware Avenue JCC was no longer seen as meeting the needs of a changing community. The building was sold, and 10 years later the community transformed a tennis club on Lower Lions Club Road in Ancaster into a new JCC. That building was sold in September 2015.

A surprise discovery
A small group of construction workers noticed Szpirglas pull into the parking lot at 1030 Lower Lions Club Road. One walked over to a construction trailer, emerging moments later with a metal box.

The box had been discovered in the building’s tool and maintenance room during renovations.

“It was just sitting there with the end of it open. I looked inside and saw there were letters inside,” real estate broker Sam Berrih later told the HJN.

Taking the box, Szpirglas immediately understood that here was a time capsule  dating back to the construction of the Delaware Avenue JCC. Resisting the temptation to examine its contents — “I didn’t want to touch anything inside of it because I didn’t want it to evaporate in my hands”   — Szpriglas placed a call to current JCC president Lowell Richter.

The big reveal
My phone rings and it’s Lowell Richter on the other end.  Would I like to join him in opening  a time capsule that had turned up at the old Lower Lions Club Road JCC? Weeks later, I’m standing in an Eastgate Ford office, camera in hand, watching as Richter, dressed in an elegant business suit, unconcernedly reaches his arm deep into the dust-filled metal box and proceeds to withdraw one folded parchment after another and hold it up for examination and a photograph.

Each one is inscribed with the name and membership list of a Jewish organization. Being third and fourth generation Hamiltonians, we recognize the names of our parents’ and grandparents’ contemporaries.

There’s Marjorie Baskin and Pearl Barnett on the National Council fo Jewish Women’s list; Ben Sauder and Elmer Steinberg, members of the Lord Reading Club; Shirley Kritzer, president of the National Council of Jewish Juniors; Dr. Harry Paikin, ON the United Jewish People’s Order list; one-time editor of Hamilton’s Yiddish language newspaper, Henry Balinson, on the Workmen’s Circle list; Irving Zucker and Norm Levitt, two among dozens and dozens of the list of Jewish veterans belonging to the Hamilton Maccabees Branch 343 of the Canadian Legion; Harold Minden, Nathan Adler and Leo Barnett, listed as chairs and honourary co-chairs of the United Jewish Welfare Fund; there’s Ben Shekter and Dr. Ben Finkelstein, chairman and vice-chairman of Jewish Social Services; the Council of Jewish Organization’s Sam Smurlick, Ken Soble, and Ben Shekter, executive members and Manuel Batshaw, executive director. There are three separate Hadassah lists corresponding to its Henrietta Szold, Chanita and Marietta chapters. a list dedicated to the Grand Order of Israel Ladies Auxilliary, to the Deborah Sisterhood of Temple Anshe Sholom and Beth Jacob’s Sisterhood. Each document is another revelation and we marvel at the sheer number of Jewish organizations.

A different time
“It was a different time,” Richter says as we commiserate over the disappearance of so many of those organizations. He reminds me that the State of Israel had only been in existence for a year, the Second World War a not so distant memory.

“We did things for protection,” he said. “We were sort of alone in the world and had to fend for ourselves.” It was true, I thought. With Canada’s anti-Jewish immigration policies and Hamilton’s restrictive covenants that prevented Jews from buying homes in Westdale, it’s easy to imagine people finding a sense of belonging in their Jewish organizations. But the post-war decades were also, according to  historian Lucy Davidowicz, something of a golden age in which a thriving communal environment “reflected the new affluence and the rapid pace of social and cultural integration.” Those forces, in time, would, ironically, lead to the very demise of those same organizations. “Today it’s different,” said Richter, with the hint of a sigh.

Postscript
A few days later a thought occurs to me. Somewhere in my archives I’ve seen photographs of the actual cornerstone laying ceremony. As my family’s unofficial archivist, I have an extensive collection of all manner of documentation dating back four generations.  My decades-long interest in Hamilton Jewish oral history has led me to acquire similar material relating to the community at large. Sometimes the two overlap, as they did in this particular instance, when my search turned up two original Hamilton Spectator clippings, a special edition of the C.J.O. News (the predecessor to this newspaper) and a program brochure, all of them reporting on or relating to the cornerstone laying ceremony of the Jacob N. Goldblatt Jewish Community Centre, Jacob N. Goldblatt being my great-grandfather.

The Spectator article describes a scene in which  “a number of distinguished guests as well as several hundred members of the Jewish community and the general public” are assembled in front of 57 Delaware. The mayor of Hamilton, Ontario’s Minister of Health bring greetings. Rabbi Bernard Baskin chants the invocation. CHML and CHCH TV owner Ken Soble launches a $115,000 fundraising campaign that will see the project through to completion.

A paragraph highlighted in bold catches my eye.  “A feature of the ceremony was the placing of a metal capsule containing parchments inscribed with the names of all the organizations and committees which had taken part in the project,” it reads.

The Spec story includes three photographs: One of  my great aunt Mashe Levinson using a silver trowel to smooth over the mortar that encloses the time capsule inside the cornerstone; one of my grandfather, Frank Goldblatt and his siblings posing proudly in front of the stone inscribed with their father’s name; a third shows a close up of the cornerstone itself, framed by Rabbi Samuel Levine, mezuzah in hand, as he recites a blessing into a CHML microphone, and a smiling Ken Soble. I peer closely at this particular photo and think, “But where’s the cornerstone?”

The next day, I found it at the old JCC, where helpful construction workers helped load it into my car. Today it sits among fallen autumn leaves in my backyard. A homecoming.

Where you can see it 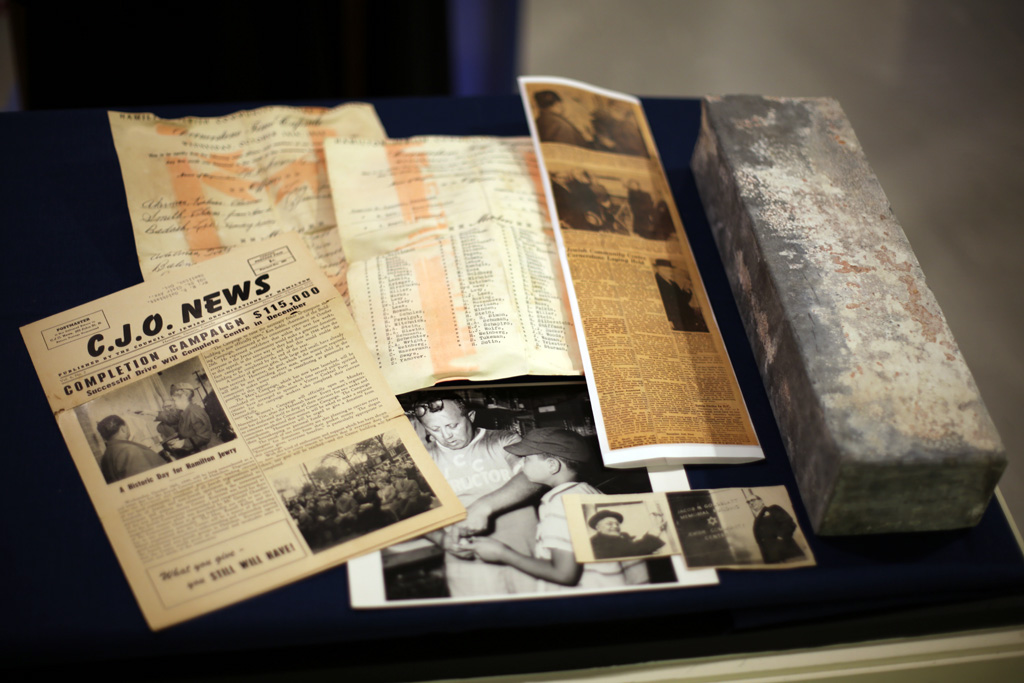 The time capsule, some of its contents, and other related artifacts  are currently on display at the Dundas Museum and Archives until mid-  January 2018. For museum hours visit https://dundasmuseum.ca.

VIDEO
Watch the 2005 Jewish Hamilton Project interview with Bill Stern, in which the former executive director of Hamilton's Council of Jewish Organizations talks about the Jewish communal structure of 1960s Hamilton.