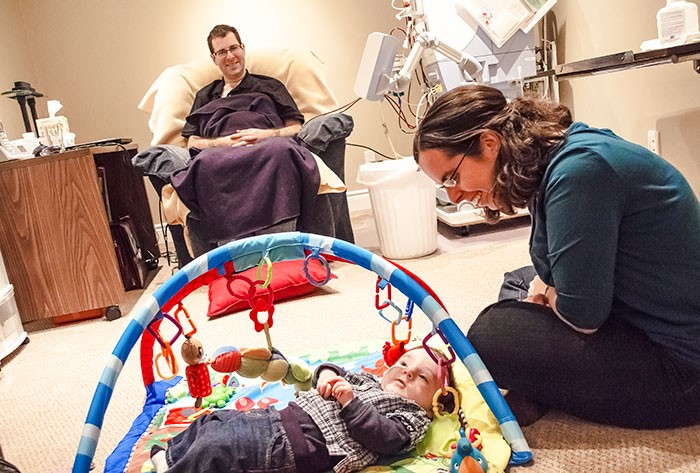 Much has changed since Joy and Arie Pekar first went public a year ago about Arie’s need to find a kidney donor. At that time the couple was hoping to avoid his going on dialysis in the face of deteriorating genetic kidney disease.  A year later, blessed with a new baby, whose early arrival coincided with Arie’s starting dialysis, the Pekars are doing their best to adjust to a vastly different reality.

It’s the Pekars’ unfailing optimism that leaves the strongest impression on a visitor to their Dundas home. Laughter is ever-present as the couple explains the circumstances surrounding the birth of their son, Benny, just days after Arie’s undergoing a surgical procedure to enable him to do at-home dialysis treatments.  With Arie’s doctor telling him that he could not afford to delay starting dialysis any longer than necessary, the Pekars decided to start the process well before Joy’s expected due date.

“In theory they could have postponed it,” said Joy, “but he would have gotten sicker.” But by the time Arie completed tests to determine if he was a candidate for a less invasive form of dialysis (he wasn’t), his surgery ended up being booked only three weeks before the baby was due.

“I said to myself,  ‘That’s ok. First babies are usually about a week late so we’ll have about a month. And of course our baby shows up three weeks early.”   Benny’s arrival  by emergency caesariean section four days following Arie’s surgery led to both Joy and Arie recuperating on different floors of the same hospital.  Joy laughs as she recalls that particular scene and the days that followed.

“During the first two months of dialysis, Arie was getting his treatment at hospital until he stabilized and we understood what to do. The two of us would go with the baby to learn how to use the machine and how to dialyse him at home. Looking back it’s almost comical that we were there with a newborn and trying to hook up the machine.”

Thankfully the couple was receiving tremendous support from their families, including Arie’s mother, Ilana, who has been on dialysis for 20 years and is also waiting for a kidney transplant.

But Arie hopes to avoid a life on dialysis, like his mother. At 35, with a new baby and his whole life ahead of him, he remains optimistic that a donor will be found.

In the meantime, he and his wife have made the best of a routine that includes twice-weekly dialysis treatments, each of which takes five and a half hours (including set-up and take-down.) This, in addition to adjusting to a new member of the family, has resulted in some profound changes in both Joy and Arie.

“We’re not the same people that we were,” said Joy. “You’re not putting yourself first anymore. You’re not working on your own timeline anymore. We’ve learned to roll with the punches."

“I’ve had to learn to stop working so much,” said Arie, a self-confessed former workaholic who owns a video surveillance company. “I used to stay at work until two or three in the morning working on a project ... It’s been a big thing to just let it go. To still care about it but to trust other people to do the jobs I used to do.”

More than anything, the Pekars are grateful for the outpouring of support they’ve received over the last year, from neighbours who have brought food, shovelled their driveway and helped with their garbage and recycling to Arie’s business clients who have maintained their loyalty. They’re also grateful to the Oakville synagogue where Arie’s mother is a member, for hosting a program on the mitzvah of organ donation, whose featured guest was John Anhang, who heads the Toronto branch of Renewal, a Jewish organization that tries to hook up people in need of a kidney with potential donors.

In 2009 an ad in a New York-based Jewish newspaper caught Anhang’s eye.

“It was  someone looking for a kidney through Renewal,” he said. Anhang contacted the organization and ended up flying to New York to donate his kidney to someone who lives in Jerusalem.

An observant Jew, the father of seven said he was motivated by his desire to fulfill the commandment of saving a life.
“I wanted to look for a way to thank the Almighty with my good health and to share it in a very tangible way and meaningful way,” he said. “One of the ultimate mitzvot is saving a person’s life ... and I thought this was a way to actually fulfill that commandment.”

Toronto Renewal currently has a list of 16 people in need of a kidney, a list that includes Arie Pekar.  Anhang said six transplants have been arranged over the last four years, with two additional donors in the process of finishing their testing.

“For most people it’s a deeply meaningful experience and for me too it was a phenomenal thing, realizing ... I made an impact on someone’s life which they’ll have forever. It feels great.”

But Anhang also tells people that it’s not for everyone.  “The testing is a bit of a nuisance. There’s an operation and pain involved and so on.  I stress this. We each have our strengths and our weaknesses and preferences in life. If it is, fantastic but if not, just be supportive of someone who wants to donate.”

Until then, Arie Pekar is determined not to indulge in anything resembling self pity.

“I’m in no position to complain. This has been my mothaer’s life, but this will not be my life. I will get a transplant. There’s no question in my mind that this is temporary.”