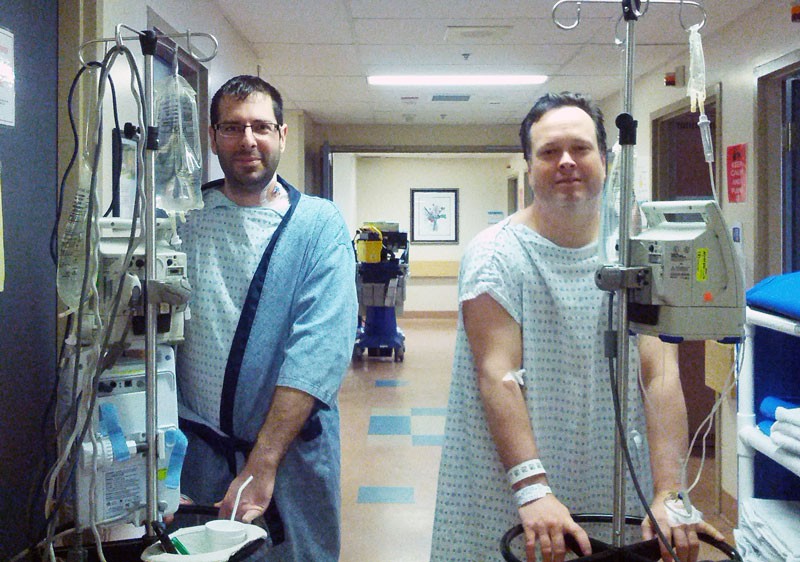 by Joy Pekar, Special to the Hamilton Jewish News

I am so thrilled to be able to share this story with you of the greatest Mitzvah, the gift of life.  On February 20th my husband, Arie Pekar’s life was forever changed thanks to the generosity of good friend Darren Kudlats, who donated a kidney to Arie.

Both men underwent surgery at St. Michael’s hospital in Toronto on the same day: Darren to have his kidney removed, and Arie to receive a kidney transplant.  Both surgeries went extremely well.  Darren’s kidney started working in Arie right away.  Three days after surgery Darren was discharged from the hospital and 5 days after surgery Arie went home.  Both were still sore but doing extremely well.

For Arie, renewed health is an understatement.   The energy he has is greater than even his teenage years.  And his blood work looks as good as it did back then too.  Before the transplant he was always tired, so much so that he had difficulty focusing on simple tasks.  He had no appetite and was itchy all the time.    Dialysis treatments were long, frequent and incredibly draining.  He had restrictions on what he could do (no swimming or showers), what he could eat and how much he could drink.  Dialysis kept him alive as he waited for a transplant but the treatments are simply not anywhere near as effective as even one healthy kidney.

Darren says it’s amazing to see Arie doing so well, so full of energy.  Though Arie didn’t look sick prior to the transplant, those who know him best see a huge difference.  He is like a new man.

Arie’s business, Inforce Security, experienced no interruption to services thanks to the help of his brother and Project Manager Josh Pekar, and his father and sales manager Morty Pekar.  Customers did not notice Arie’s short break, and only knew of Arie’s surgery because he shared the happy news with them.

Our family would like to thank the many people who helped and supported us through this journey.  Of course, Darren, there is just no thank you that is big enough.  His gift has truly changed all of our lives in immeasurable ways.  Thank you to Darren’s family who supported him in his decision to donate – we can’t imagine how difficult it is to know your loved one will go through hardship for such a selfless reason.  Thank you to the staff at St. Michael’s hospital in Toronto, doctors, nurses, transplant coordinator, everyone – their care for Arie, Darren and our families was skilled and compassionate.  Thank you to John Anhang from Life-Renewal who offered support both emotionally and financially to Darren and his family.  To friends, family, neighbors and well-wishers who prayed, called, emailed and more to send love and support throughout the process.

We continue to maintain a facebook page www.facebook.com/MomAndMeNeedAKidney to update friends, family and well wishers on Arie’s story, to raise awareness on organ donation, and to hopefully one day find a donor for Arie’s mother, Ilana Pekar, who has been waiting for a transplant while on dialysis over 20 years.