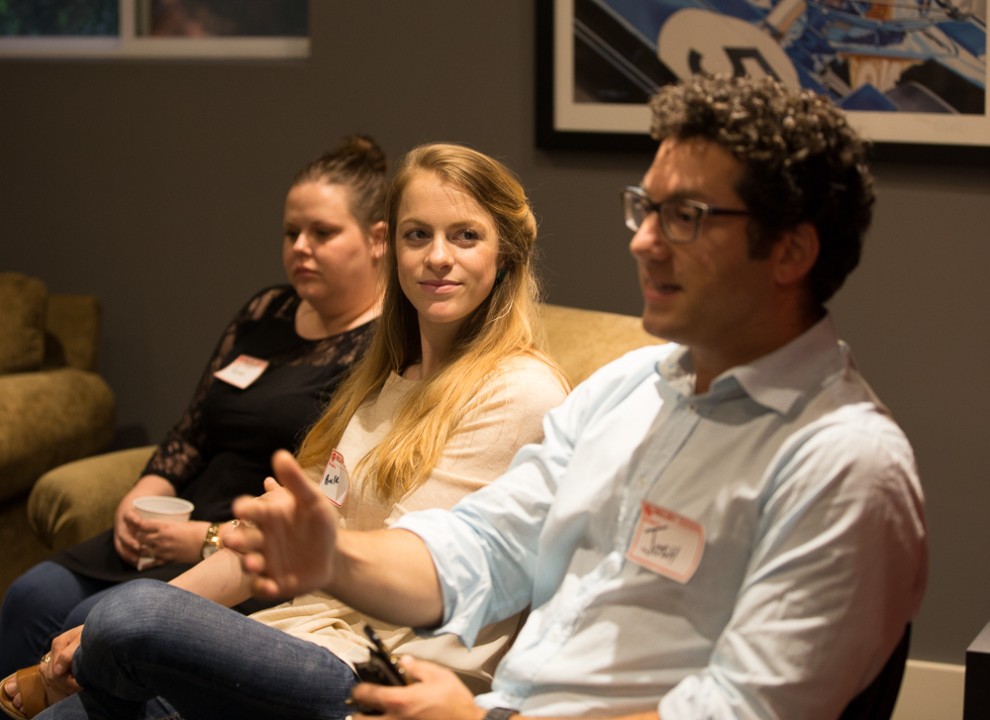 An email began circulating around Hamilton in July with a headline that read something to the tune of “Under 40s Doing Jewish in Hamilton.” Being a member of that particular demographic, and lucky enough to have received the email, I was looking forward to attending.

I have long been absent from the Hamilton Jewish community and, through a recent bout of good fortune, I am currently working on getting my foot back in the door. Like many, I had my Bar Mitzvah at 13 and then slowly Judaism began to trickle out of my life. Having grown up in Dundas, I maintain lifelong relationships with a wonderful core of genuine and wacky Jewish friends I’ve known for almost 33 years (Thanks to a Jewish playgroup at six months), but this gathering was a way for me to reconnect more broadly.

I pulled up to Cindy and Lowell Richter’s house for 7 p.m., now beginning to feel a little nervous ... perhaps it was the idea of making small talk, maybe it was forgetting people’s names or the fact I really didn’t think I would know anyone.

For me, I feel the battle of showing up to these events is purely mental. I may sugarcoat it in excuses like I am too busy, or a plethora of reasons, but I honestly find those instantly fall away once you’re in the midst of it all.

I was greeted by Cindy Richter, who went into how she hasn’t seen me since I was yay high, and my new boss, HJN editor Wendy Schneider before making small talk with other participants. I’ll be honest. That’s what it was. But you know what? Small talk is like learning to walk before you run. Without it you’ll never know if you have any similar interests, common ground or connections. And you know what, the next thing I knew, the patio filled with familiar faces. On top of that, I met Naomi, an occupational therapist and learned what an OT really does. That’s a win-win. So within a short amount of time, I met a handful of new people and reconnected with a group of peers I hadn’t seen since my pre-teen days at Temple Anshe Sholom.

In short, Under 40s Doing Jewish in Hamilton is an attempt to revitalize an aging Jewish community with younger blood. To this day I still hear stories from my father about B’nai B’rith baseball and from my mother about the Hadassah Bazaar. All these events were wonderful, I’m sure, but it takes a lot of people and sweat equity to keep active and when those leaders retire, or those great times only become great memories. Although the program was not necessarily intended as a recruitment for new community leaders, it was the first step in opening up discussion about the future of the Hamilton Jewish community with regards to a resurgence of returning Hamilton Jews and newcomers who now call Hamilton home.

Once everyone arrived, all 24 of us moved into the rec room to take part in a discussion facilitated by Lorry Schneider and Terry Bennett.  After introducing ourselves and briefly explaining what brought us to, or back to Hamilton, it became apparent that most, if not all of us, were on the same page. And I’m sure you can guess what the number one reason is? Yes, you nailed it: the rocketing prices of Toronto real estate, for which Hamilton and the Jewish community has to be thankful, because we are gaining such a richer and more diverse community with every draconian Torontonian townhouse bidding war. The most cited other reasons people gave for moving to Hamilton were the city’s wonderful access to nature partnered with the slower pace of life and booming new foodie and arts scene. Participants also said they felt that Hamilton is a great atmosphere that has great local resources to raise their children within the community.

Following introductions, the room split up into groups to discuss what meaningful Jewish experiences Hamilton has brought us, which in turn stirred up a lot of great memories from those of us who were born here. For those new to Hamilton, the fact that a night like this occurred at all showed that they have joined a community that cares about them and cares about its future.

The main goal of the night was for the Hamilton Jewish Federation and JCC leadership to hear from the younger generation about how they see themselves contributing to the future of Jewish Hamilton. Joining Lowell and Cindy Richter as observers were HJN editor Wendy Schneider, Federation’s new CEO Gustavo Rymberg and its president Jacki Levin.

There is no doubt that our generation has a desire to connect and create lasting relationships in the Jewish community, but the difficulty lies in our 21st century lifestyle, where we are faced with endless options, busy schedules, long hours, raising young families, and up-to-the-second social media alerts.

Do we need younger community leaders looking to step up? Yes. But maybe it needs to be in a 21st century way, where, instead of a sole leader taking the brunt on his or her shoulders, a rotating group of co-leaders shares the weight.

The evening was a great example of a coming together of Jews in the community. Within our gathering alone there was interest in starting a toddler/parent group, joining an existing Jewish poker group, and starting a co-ed Jewish baseball league.  It’s wonderful that so many people want to make things happen. The tricky part is following through.

The evening concluded with some short remarks by Gustavo Rymberg, who emphasized Federation’s desire to do whatever it can to meet the needs of this generation through ongoing dialog and facilitation. Although it’s just a start, what emerged from the evening is a Facebook group under the name Doing Jewish in Hamilton Under 40, kindly created by the Hamilton Jewish Federation for the purpose of helping young people with each other. So please, if you are looking to host a parent-toddler activity, get a baseball game going like the good ol’ days, or any sort of get-together; or perhaps even looking to step-up and become a leader, know that there is a lot of interest, and there are a lot of new and returning Hamiltonians who would welcome your efforts. Who knows? A little small talk could go a long way.

A follow-up meeting for Jewish Hamiltonians in their 20s, 30s and 40s, will take place on Wednesday, Oct.18 at 14 Crawford Court in Dundas. The evening, sponsored by Hamilton Jewish Federation and the Jewish Community Centre, will once again be facilitated by Lorry Schneider and Terry Bennett. To get your name on the email list, for more information or to RSVP, please email the JCC at info@hamiltonjcc.com.