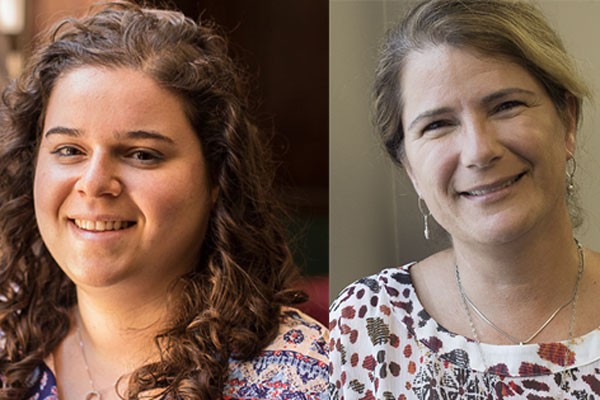 When Elysa Keshen saw a posting for a position at Beth Jacob Synagogue, she thought it was a perfect fit.

“I met my husband in Israel in the army. If we had stayed there, we would have probably been on a kibbutz. We are not big city people. We want to be part of a warm Jewish community that is not too big,” said Keshen, who is the new Director of Innovation and Community Engagement for Beth Jacob.

A Toronto native, Keshen attended Jewish day school from Grade 1-12 and attended Camp Ramah as both a camper and staff member. After graduating high school, she earned a Religious Studies degree at York University with a specialization in Jewish Studies. She moved to Israel and served in the Israel Defense Force’s Iron Dome Unit for 18 months.

In 2016, Elysa and her then fiancé, Josh, returned to Toronto with their dog, Milo. They married last August. Over the past two years, Keshen has worked as an educator at both supplementary and day schools. In June, she graduated from Hebrew College with a Masters in Jewish Education where she received distinction for her thesis on the impact of weekly challah baking in kindergarten.

“I like the idea of being in a traditional but also liberal Conservative community and participating in the daily services and being a part of day-to-day spiritual life. That attracted me to Hamilton and Beth Jacob,” said Keshen, 27. “I look forward to getting to know the community. There is so much to look forward to and so much to hope for in the future.”

A native of Israel, Symons grew up in Canada and has a Bachelor of Arts in Education and Religious Studies, as well as a Master’s in Jewish Education from York University. She holds a principal of day school license and is a certified New York State public and Jewish day school teacher with many years of experience. Symons is married to Dr. Andrew Symons and they live in Williamsville, NY with their two children, Gilad and Shira. Her mother and her brother and his wife and three children live in Hamilton, and Symons will be spending several days a week in the city over the course of the school year.

“I love Jewish education. When I was considering what else I might do, I realized I can’t work anywhere but the Jewish community,” said Symons, 50. “I don’t want to feel like I am going to work each day, which I have never had in all my years of working in Jewish education.

“I am excited to be here. I want to provide new opportunities for kids and adults to learn. The desire is there, we just need to provide it in a way that works for the way people live now.”

Keshen agrees. “All synagogues across North America are struggling to engage people, especially in my age group,” she says. “We are going to work for that. We want to breathe new life into the community.”