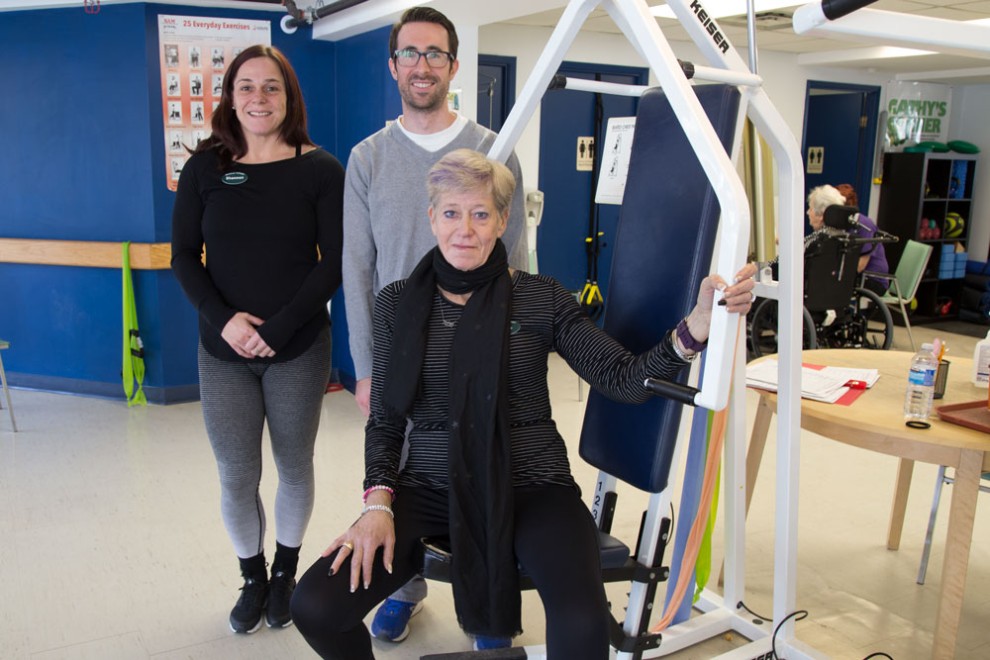 There is a beaming energy inside The Club Fitness Centre at Shalom Village, and with great reason. In the fall of 2017 The Club received a $321,500 Grow Grant from the Ontario Trillium Fund to help implement its Active Across the Ages program, aimed at increasing its equipment, staffing, and capacity to deliver customized age-appropriate training.

On Jan. 19, the health club was packed with new and longtime members, some seated in folding chairs while other rhythmically worked away on gym equipment. Amongst them stood Shalom Village’s staff and head coach Mike Nielsen, local politicians, Anne Tennier from the Ontario Trillium Fund and Shalom Village CEO Jeanette O’Leary. Everyone was there to hear firsthand how the grant has aided in the progress of the program, and nothing speaks better than having members share their personal stories.

Since receiving the grant last fall, The Club has added 56 new members, which is impressive considering the program previously had  around 70 members. They have also cut down on wait times for new enrolment by adding two new staff members and five volunteers. Shannon Terry’s name was on the lips of many of those heaping praises on the program that afternoon.  Terry was initially hired as an assistant coach  on a five-month contract, but thanks to the grant her full time position has been extended, which is great news for The Club members.

When I had a chance to chat with her I had a question for Terry.  “People love you around here,” I said, “What’s your secret?” Before she had a chance to reply, Shirley Staples Hutton, walked up to us,  beaming. “Shannon is amazing,” she said. “I broke my femur and was using a walker when I came here. I didn’t think that I was going to be able to walk again. Well here I am today, all thanks to Shannon.”

Ellen Hoffman is another client of Terry’s who has undergone a life-changing transformation. Since coming to Shalom Village in April of 2017, Hoffman has lost more than 170 lbs.

“Shannon has me on a fitness and diet plan of high protein and low carbohydrates,” said Hoffman. One of Hoffman’s first goals was to walk to the top of the hill outside Shalom Village. She started off slowly on the treadmill twice a day and built herself up, gaining strength one day at a time. “Ellen made it to the top of that hill,” said Terry, “and then she just kept on going. I was shouting her on, cheering, jumping up and down.”

These are the kind of relationships that are being forged at Shalom Village, and it’s clear the grant is going to make it possible for even more lives to be positively impacted.

On a personal note, I must say it is truly inspirational watching seniors working out. I couldn’t help but think that I am half their age, at best, and I struggle to make my way to the gym. When Shalom Village CEO Jeanette O’Leary said  that day that being independent and mobile adds to people’s quality of life, it made so much sense. At 34, I take for granted that I can get around with ease, but what The Club is doing for these people is allowing them to claim their freedom through fitness, and they are flooding to the machines in droves. As soon as the speeches were  over the members moved straight from their from their folding chairs to the equipment and began working away.

It is so refreshing to see a grant going to such great use. It’s seldom you are in the presence of such a success story leaves you in a state of awe, but that’s exactly how I felt walking amongst the people of Shalom Village.

In addition to more than 200 Shalom Village residents, The Club is open to all individuals from the wider community over the age of 70. There is an initial $20 assessment fee and a 4 month membership fee of $100 ($25/month). Members can continually renew their membership every 4 months at $100. For more information visit www.shalomvillage.ca or call 905.529.1613 ext. 220.and speak with head coach Mike Nielsen.