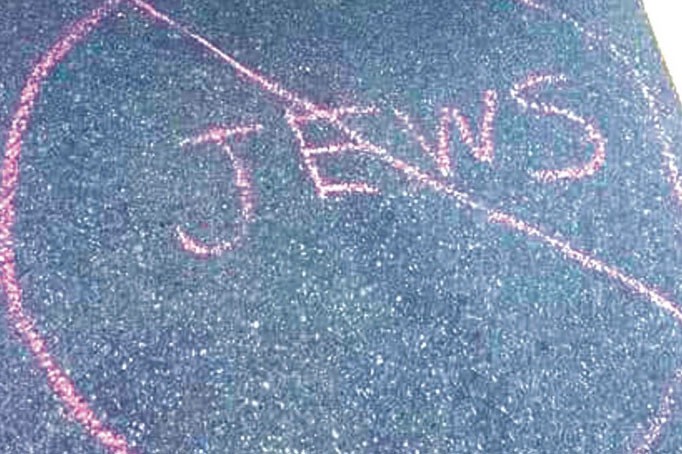 November 11, 2021
Steve Arnold
House arrest, probation and community service are the prices two Hamilton men will pay for scrawling antisemitic graffiti on the parking lot of a local synagogue.
The sentence was handed down Tuesday, more than two years after Blake Trautman and Liam Greaves decided it would amuse their friends to chalk some Jew-hatred onto the parking lot of Beth Jacob synagogue.
Both men admitted in court they’d been drinking heavily that day, but denied their escapade was motivated by hate.
Their artwork – the word Jews in a circle with a red line through it and a drawing of a swastika – greeted congregants the next morning as they gathered for the Shabbat between Rosh Hashanah and Yom Kippur.
In a victim impact statement, Rabbi Hillel Lavery-Yisraeli, said the prank struck chords of real fear for some members, especially Holocaust survivors.
“This incident was unimaginably frightening,” he said. “Our sanctuary was full that day with members of all ages, including Holocaust survivors, people who, 70 years later, thought they had left all of that behind them and had found a new sanctuary in Canada.”
“There is no way to undo the feeling of fear it created to think some of our neighbours still identify with Nazi ideology,” he added. “Even two years later some Jewish teenagers are still afraid to come to the synagogue because of this.”
Michal Schlesinger, manager of legal affairs for the Human Rights League of B’nai Brith Canada, said with antisemitism rising across Canada the Beth Jacob incident must be seen, and punished, as more than a foolish prank.
“On its own this may seem like a childish, but victimless prank, but we hear daily from people who are victimized by this kind of hate and now fear for their families,” he said.
In 2020, Schlesinger said. B’nai Brith’s antisemitism hotline averaged seven calls a day reporting incident that caused people to fear for their safety. In May 2021, the agency recorded the highest-ever number of violent incidents.
“We have easily surpassed the number of incidents we reported in all of 2020,” he said. “We are seeing new levels of fear and concern for personal safety that not many years ago would have been thought impossible in Canada.”
“Incidents like this make it seem clear Jews are not welcome here and should fear for their personal and community safety,” he added.
After defacing the synagogue, Greaves added some anti-Black sentiments on a nearby sidewalk.
Leo Johnson, executive director of advocacy agency Empowerment Squared, said the incident also had a “devastating impact” on the city’s Black community.
“This incident has created real fear in the Black community,” he said. “Our community members don’t feel they can let their children play outside because of this fear.”
“How can I trust that my neighbours do not believe in these hate messages,” he added. “Consequently, I trust no one and we treat everyone with suspicion, including teachers.”
Defence lawyers John Abrams (for Greaves) and Andrew Confente (for Trautman), backed the prosecution’s proposed sentence, arguing both men were suffering mental health issues but stepped up after they had been identified and turned themselves in.
That action, Abrams argued, may have been the only way charges ever resulted from the incident.
“From the beginning they have accepted their responsibility here,” Abrams said. “Very little planning went into this; it was a spur of the moment thing.”
“Without their action there might not have been a prosecution or closure for the community,” he said. “Young people make mistakes, but if they admit those mistakes and try to make amends that should carry some weight.”
Confente added Trautman has been reading books and watching movies about the Holocaust to gain insight into why his crudely drawn symbols caused such trauma for Beth Jacob congregants.
Assistant Crown Attorney Clair Hopkins asked for sentences of eight months house arrest, two years probation and 150 hours of community service for Greaves and six months house arrest, two years probation and 100 hours of community service for Trautman. He received a lighter sentence because he was involved only in the graffiti at Beth Jacob while Greaves’ work attacked both communities.
Greaves and Trautman were convicted on two charges of mischief. Judge Bernd Zabel elevated the incidents to hate crimes.
In a news release after the sentences were imposed B’nai Brith Canada CEO Michael Mostyn welcomed the penalties because of the harm such incidents do to the Jewish community.
“We are encouraged that the two men came forward and apologized for this hateful act,” he said. “This case would not have been solved had the two not stepped forward. Nonetheless, they caused grave alarm with their hateful sentiments. There is never any excuse for such vile acts.”