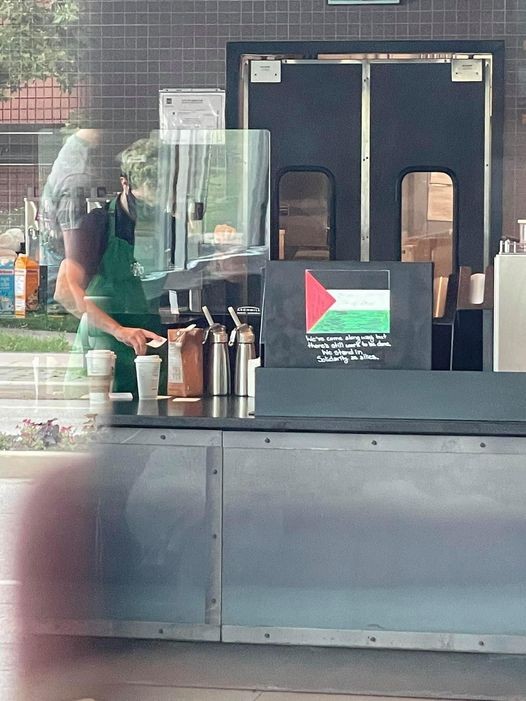 Starbucks customers at the company’s York Boulevard store were treated to a call for Palestinian solidarity along with their Frappuccino and pricey coffees Saturday.

A crudely hand-drawn Palestinian flag was posted in the store during the afternoon shift, striking anger in the hearts of Jewish customers and sparking immediate Internet calls for a boycott of the popular chain.
Toronto resident Leor Herman was in Hamilton that day on business and dropped into the store for lunch with some colleagues but left without buying anything after seeing the display.
“I was a little shocked and left the store because I wasn’t comfortable buying anything, nor did I want to make a scene,” he said in an email exchange. He did, however, snap a picture of the offending display and posted it to social media sites Facebook and Twitter.
“I took the picture and shared it on Facebook and tweeted it to Starbucks Canada, asking if it was an acceptable political message for their store,” he wrote.
The message accompanying the chalk drawing proclaimed “We’ve come along (sic) way but there’s still work to be done. We stand in solidarity as allies.”
Herman dismissed the idea the barista who posted the notice was simply exercising freedom of expression.
“The problem I have with it as an issue of freedom of expression is that, if someone had posted a similar expression of support for Israel, there would have been a backlash from the other side,” he wrote. “So I believe there should be a level playing field: it’s against company policy, and that has to go both ways.”
Herman added he thinks the sign really had nothing to do with “solidarity with Palestinians” and everything to do with attacking Israel.
“I’m pretty sure the sign wasn’t expressing solidarity to Palestinians oppressed by Hamas or the (Palestinian Authority), but in a one-sided condemnation of Israel, instead of an endorsement of peace and co-existence.”
Within hours more than 500 people had commented on Herman’s post expressing sadness and anger at the incident. Many threatened to boycott the chain if immediate action wasn’t taken – a reaction Toronto resident Mel Korn said is misguided.
“I was immediately struck by all the hotheads yelling boycott, boycott, boycott,” Korn said in an interview. “Starbucks isn’t going to even notice a boycott; they’re not going to miss your $10 a week.”
Korn said he learned of the display when he saw Herman’s Facebook posting. He immediately called the store and spoke with an employee who admitted putting the display up.
“She tried telling me there was nothing negative there, she just wanted to express support for these poor people,” Korn said. “I ended up calling her a moron and then I got a lot less polite.”
“Yes, people have freedom of expression, but they’re not allowed to bring their personal political feelings into their workplace like that,” he said. “Anybody with half a brain would know no company would allow this.”
Korn took the matter a step farther and contacted the company’s Canadian corporate office, where he was promised the display was strictly against company policy and “appropriate action” would be taken against the employees involved.
Korn praised the company’s response for its speed.
“I think Starbucks has handled it in the right way, they have been very responsive,” he said. “I’m sure the people who did this won’t be working for Starbucks too much longer.”
In an email exchange a spokesperson for Starbucks Canadian office said the image has been removed.
“We want everyone, both our partners and customers, to have a warm, welcoming and safe experience in our stores. In cases where that doesn’t happen, we work to address it,” the statement said. “Starbucks is aware of the incident and we are taking this matter very seriously.”
The spokesperson did not reply to a follow-up email asking how the matter was handled and whether the offending employee has been fired.
The Hamilton incident is not the first time Israel-Palestinian politics have appeared alongside vente hot chocolates and coffee. Several months ago a barista at a Thornhill location ran afoul of company policies by sporting a tee-shirt and mask displaying the Palestinian flag and proclaiming the message “stop the oppression in Palestine.”
Again, Herman said, the issue was reported to the company and promptly handled.  It was reported (not by me) to a regional manager and apparently dealt with.