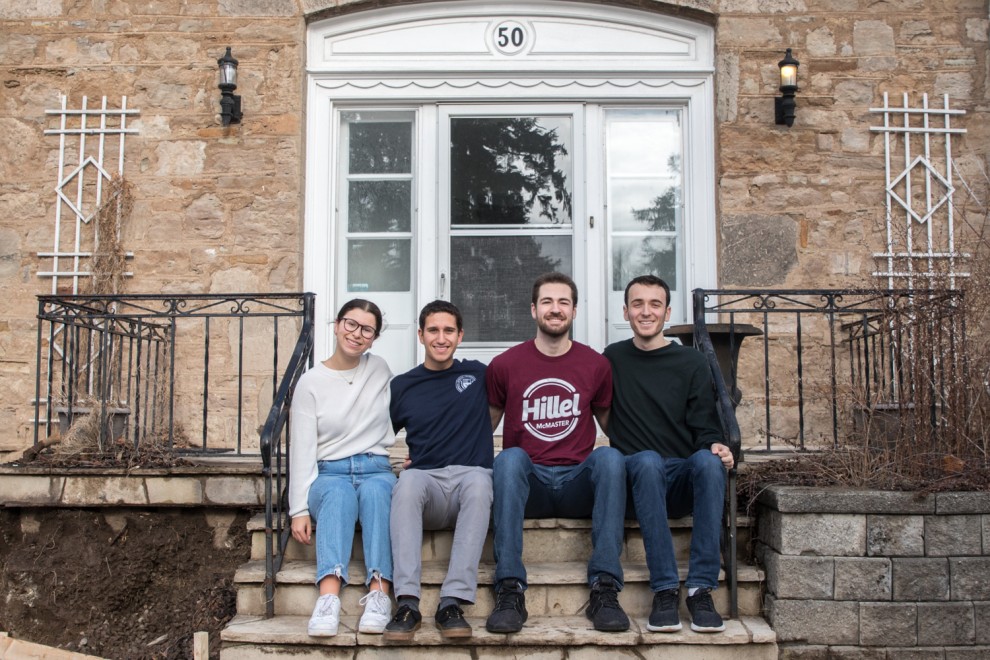 Rabbi Bernard and Marjorie Baskin’s West Hamilton home, once a gathering place for their university-aged children’s friends back in the 1960s, is coming full circle with the recent announcement by McMaster Hillel that the historic property at 50 Sanders Blvd. will be its new home. Until now, McMaster Hillel (formerly the Jewish Student Association) has been located in the basement of a student dormitory in a small space allocated to the organization by the university. For years, the dream of  an off-campus house for Jewish students  seemed out of reach, until a fortuitous set of circumstances came together. First, was Rabbi Baskin’s decision last year to move to Toronto after 60 years in his home. Next, was the purchase of the Baskin property by a buyer who had no immediate plans for its development. Third, and most significant, was the role played by Effort Trust President and CEO Tom Weisz, who saw an opportunity for McMaster Hillel and acted on it.

“The buyer wasn’t going to be using the property right away … and Hillel had a need,” Tom Weisz told the HJN. “Hillel was looking for some assistance and I wanted to make sure whatever assistance our family gave was something that mattered to us as well as to Hillel.”

Hillel Ontario CEO Marc Newburgh said that having community partners like the Weisz, Asa, and Horwood families is invaluable.

“Tom and Sasha Weisz are so invested in the Jewish community of Hamilton and McMaster Hillel,” he said. “They’ve known for a long time that we’ve wanted to get a proper space for McMaster students, and we’re thrilled that they’re partnering with us on this.”

That partnership has come in the form of the Weisz family financing renovations that have transformed a single-family dwelling into a combined student residence and communal space, using a model based on that used by Moishe House, an organization that operates subsidized homes for Jewish young professionals around the world.

“This will be both a living and learning house,” said McMaster Hillel director, Judith Dworkin, explaining that there will be five rooms available to rent to students who will be chosen for their leadership skills and programming experience.

Hillel Shabbat dinners currently alternate  between the Adas Israel and Temple Anshe Sholom, with Beth Jacob Synagogue being a little too far from campus. That practice will continue.

That growth has been so significant that Hillel has hired senior educator Rabbi Ben Shefter and advocacy coordinator Beth Vander Stoep to work with Dworkin, who, back in 2015, was its solo professional.

With this growth has come increased engagement. Dworkin is especially excited about students having access to a kosher kitchen.

“A lot of our programming and creating community is around food and we’ve been quite limited in how we’ve been able to use food to engage students,” she said. “One of my goals is to showcase the diversity of Jewish population. So what an amazing opportunity it will be to showcase to students Indian, Moroccan and Ethiopian Jewish food.”

“Just as McMaster is growing, so is Hillel,” said Tom Weisz. “In the future, Hillel may well require an even larger location, or move onto campus to sucessfully fulfil its mandate. Until then, we’re excited to make this first step a reality in the former home of Rabbi Baskin.”

Weisz said the most exciting aspect of the Baskin home/Mac Hillel shidduch (Yiddish for an arranged match or negotiation) are the numerous interconnections between his family, the Baskin family and McMaster.

“Our history with the Baskin family goes back to my bar mitzvah,” he said. “Our wedding, our children’s baby namings, brises, bar and bat mitzvahs, and our daughter’s wedding took place at the Temple. My sister, Janet, was a very good friend of Susan Baskin and spent a lot of time in that house as a kid.”

The Baskins, in turn, had strong connections with McMaster throughout the 60-year period they lived on Sanders Boulevard. Weisz said he only recently discovered that Rabbi Baskin served as a university chaplain back in the 1950s and ’60s, and Marjorie Baskin worked at the university for more than two decades as both a researcher and the communications and public relations officer for the faculty of Health Sciences. The Baskins frequently hosted barbeques at their home for McMaster students, including future celebrities Martin Short and Eugene Levy.

It’s no wonder, then, that Weisz has taken particular pleasure in seeing the new home called the Baskin Hillel House.

“Rabbi Baskin is important to me and not just because of the family connection, but because of who he is to our overall community. Rabbi Baskin makes me feel proud to be Jewish,” said Weisz.

The news of Mac Hillel’s new home has generated tremendous excitement among the Jewish student body.

“Students are very excited that it is Rabbi Baskin’s old house,” said Dworkin. “They are empowered by that, and they want to take care of it.”

Sam Neumark, McMaster Hillel’s education chair, told the HJN that the acquisition presents “a tremendous opportunity to diversify programming  and reach out to more students on campus.”

Hillel president, Josh Arbess and Israel chair, Gal Arnon, agree. “We’re so grateful to have this new hub for Jewish life on campus where we can run programming, events and initiatives,” said Arbess.

“We’re already very tightly knit as it is and having this home base with all this history allows us to strengthen the community we already have,” said Arnon. “It will really change the way things work here.”