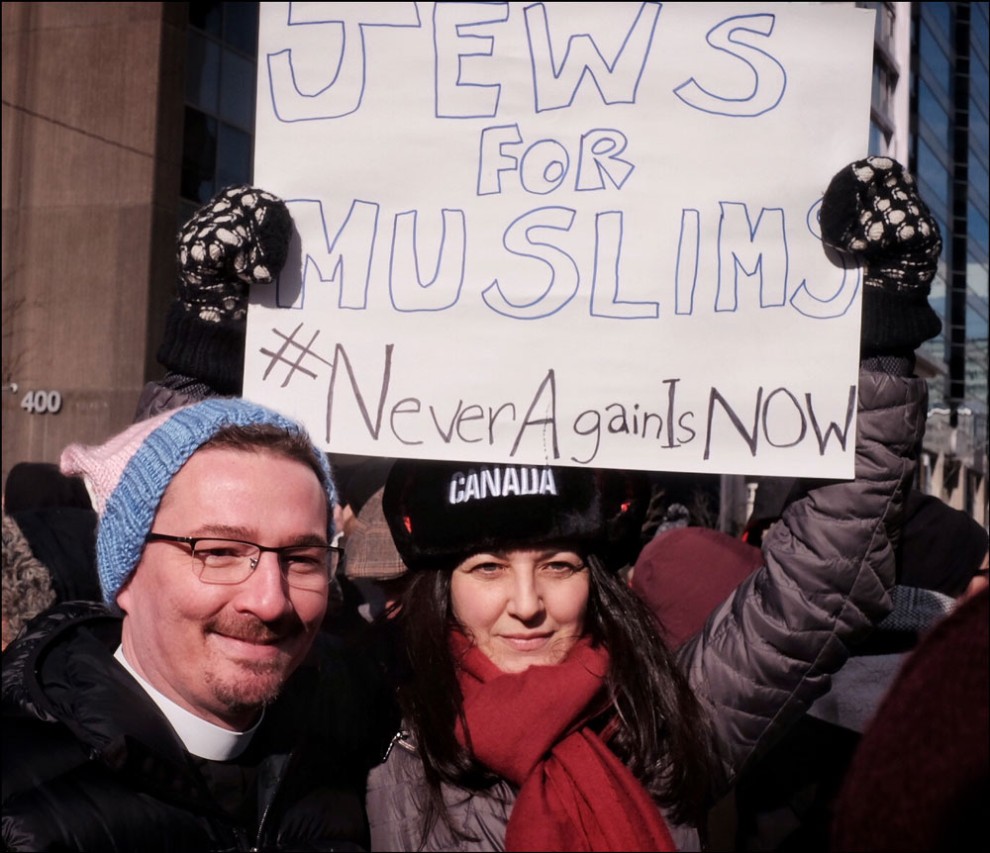 Anti-Semitism, according to Merriam-Webster Dictionary, is “hostility toward or discrimination against Jews as a religious, ethnic, or racial group.”

Islamophobia, meanwhile, is defined as an “irrational fear of, aversion to, or discrimination against Islam or people who practice Islam.”

Fear and aversion. Few Muslims in Canada would disagree that they face these on a daily basis.

Muslim leaders noted that the shootings, coupled with U.S. President Donald Trump’s 90-day ban on immigrants from seven Muslim-majority countries, should lay to rest any doubts that Islamophobia is real.

Hate by numbers
The number of police-reported hate crimes against Muslims more than doubled over a three-year period (2012 to 2014), according to figures released by Statistics Canada last year.

In 2013, an Angus Reid poll revealed that 54 per cent of Canadians held unfavourable views of Muslims – up from 46 per cent in 2009. In Quebec, a negative view of Islam was held by 69 per cent of the population.

Anti-Islamic sentiment was also stoked in some quarters by Canada’s admission of some 25,000 refugees from Syria between November 2015 and March 2016.

What’s in a name?
The rampage in Quebec City raised the general question of how Jews, as a people who have experienced history’s most brutal forms of prejudice and hatred, should respond to Islamophobia?

First, there’s the word itself.

Prof. David Novak, a University of Toronto expert on Jewish theology, ethics and philosophy (and an ordained Orthodox rabbi) bluntly calls Islamophobia “a soundbite” and “a stupid phrase.”

“I strongly object to the use of the term.”

He would prefer the term “anti-Islamic,” comparable to “anti-Judaic.” However, comparing Islamophobia with anti-Semitism “is a little bit different, because anti-Semitism and anti-Judaism are not the same things.”

“It combines fear of Muslims with dislike of Muslims. It makes a certain amount of sense. ‘Anti-Islamicism’ is clumsier.”

Asked whether Jews are speaking out more now against Islamophobia, Weinfeld said, “it depends which Jews.”

Liberal Jews are more comfortable publicly opposing Islamophobia – and it was mostly liberal synagogues that sponsored Syrian refugees – while more traditional Jews “have been much more ambivalent because they are keenly aware of the fact that a lot of Muslims are opposed to Israel.”

“Our teachings from rabbis Hillel and Akiva make caring about our neighbour a fundamental principle of Jewish ethics,” Landau said. “As a group, Jews have been vulnerable to irrational hatred for centuries, and therefore, our experience enhances our empathy and responsibility to speak out when others experience racism and faith-based prejudice.”

Karen Mock, chair of the progressive Zionist group JSpaceCanada and a longtime anti-racism activist, agreed Jews are duty-bound “to speak out against all forms of prejudice, bigotry and hate.”

While Jews indeed have “a moral obligation” to oppose all forms of discrimination, “the real question” is how one defines Islamophobia, said Novak.

Killing worshippers in a mosque certainly qualifies as hatred of Muslims. So does believing that Islam is an evil religion, he said.

“On the other hand, if someone says that we have a particular problem with Islamicist terrorism, I don’t consider that to be Islamophobia.”

Terrorism, theology, tradition
Novak said he feels Islamophobia is clouded by “the problem of what has been called Islamicist terrorism, which certainly cannot be blamed on Islam, but certainly a lot of Islamic theology seems to lend itself to that.”

While the Jewish tradition on the whole has “had a very high view of Islam,” there have been “a lot of problems” between Jews and Arabs in the past century, “especially [those] who are overwhelmingly Muslim,” Novak said.

Anti-Islamic sentiment has risen “because the vast majority of terrorist acts in North America and Europe have been performed by people who claim to be doing this in the name of Islam.”

It’s up to Muslims to denounce terror and challenge those who say Islamic teachings support it, in the same way Christians, especially since the Holocaust, have distanced themselves from the anti-Semitism that once emanated from the pulpit, Novak said.

But for many Muslims, “it’s more difficult in the political climate today. A lot of Muslims fear for their lives when they speak out.”

As Landau sees it, anti-Semitism and Islamophobia share “irrational prejudice, discrimination and actions to marginalize or terrorize members of a minority faith community.”

Their histories are different, but “the key concern” is speaking out when individuals on both sides are subjected to violence based on their identity, she said. “Perpetrators are emboldened by silence, acquiescence or worse.”

“It shouldn’t come in at all. We should all stand together against Islamophobia and anti-Semitism in all their forms.”
Israel “becomes conflated with all that,” Mock said. “It’s a political discussion that should have nothing to do with religion. But because of propaganda and hatemongering – from them and us – many Muslims and Jews in the Diaspora have been polarized against each other when it comes to discussions of the Middle East.

“When people discriminate against Jews because of the situation in Israel, that is anti-Semitism, whereas criticism of Israeli policies is not,” Mock said.

Landau encourages people “to build a relationship based on getting along as Canadians and avoid confrontations about a problem that is not ours to resolve.”

Novak agrees the Middle East conflict is not about religion.

“It is a political conflict, [but] one that clearly can be resolved by Jews and Muslims.” Still, it colours relations. “Jews look to a certain degree with suspicion on Muslims, because Muslims largely come from countries that are the enemies of the Jewish state and Jewish People.”

Raheel Raza, an outspoken Muslim activist, sees Islamophobia as “a created word. The very word – fear of Islam – does not really identify what we are talking about. It shuts down criticism of Islam.”

To Raza, the picture is much larger, encompassing racism, bigotry, and old hatreds. As a Muslim Zionist, Raza pointed out that the rise of anti-Semitism in Europe and the West “doesn’t get the same kind of attention that this whole Islamophobia notion does.” Yes, there are attacks on Muslims, but Islamophobia “isn’t institutionalized, like the anti-Semitism in Europe.

“So I have difficulty with that term.”

Weinfeld said that challenges facing Muslims in Canada today are greater than those facing Jews.

Muslims are more recent immigrants, not as well integrated and tend to come from societies racked by violence, he noted. They find themselves where Jews were in Canada a century ago.

“Muslims,” Weinfeld said, “are now the iconic ‘other.’”