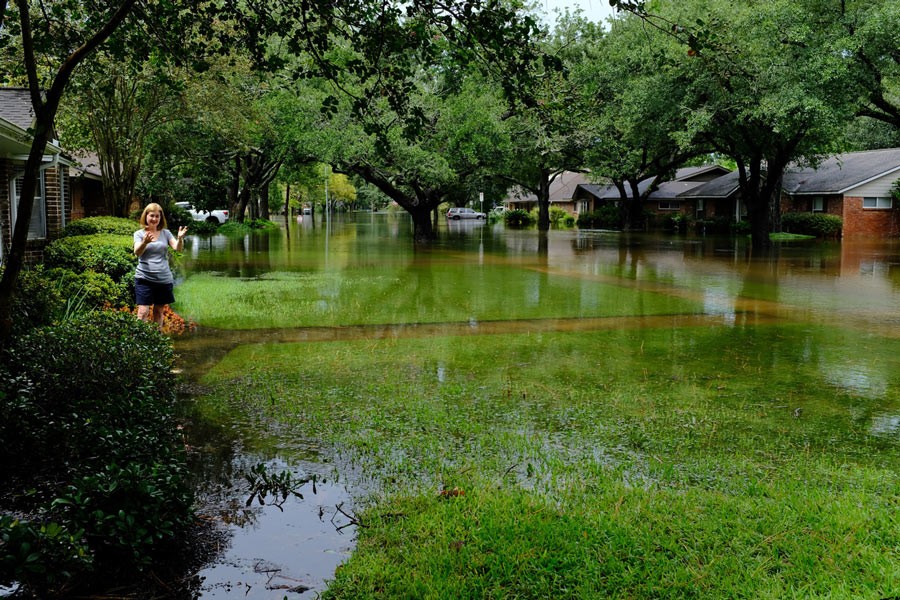 An interview with Kenneth S. Arfa, MD, an old friend of the editor's from their student days at Tel Aviv University's Overseas Program.

Q: Please introduce yourself. How did you get to Texas?

A: I grew up in New York City and moved to Texas to work as a journalist. I met my wife Judy, a native Houstonian, and went to medical school in Dallas, which is four hours by car north of Houston.

We moved to Houston in 2001, a three months after Tropical Storm Allison wrecked Houston. Allison was a bit of a preview of Hurricane Harvey. She lingered for 15 days and dumped as much as 40 inches of rain in Texas, with the worst damage in Houston. Our large arts district, downtown, and the Texas Medical Center took on enormous amounts of water.

Deciding where to live when we moved here just after Allison was tough. We preferred a modern Orthodox neighborhood like where United Orthodox (UOS) synagogue sits, but knew that area flooded, so we instead chose Meyerland, a mile away. Meyerland, a heavily Jewish neighborhood, also had flooded but we bought away from the bayou, on a street that had never flooded, and the house seemed safe. The word bayou sounds romantic but it’s basically a stream that serves to drain neighborhoods into the Gulf of Mexico. There’s also a “frum” neighborhood about two miles west of us, a mix of Chabad and haredi, but I don’t think they flooded severely.

Since 2001, Houston saw major floods in 2006, 2008, 2015, and 2016. Aside from these period  disasters of nature, Houston is actually a wonderful city. Fourth largest in the US, highly diverse, and about 50,000 Jews. The Jewish community is warm, benevolent, and generally supportive of Israel.

Q: How were you personally affected by Hurricane Harvey?

A: I have a bit of survivors’ guilt, since our home came within a centimeter of flooding and then the rain stopped. Our street, which never flooded during multiple storms in the past decade, saw most houses with between an inch and six inches of water. Only a half-dozen homes did not flood, including mine. Same with the cars, they stayed dry.

The day of the worst flooding, US Coast Guard and state police helicopters flew overhead to make emergency rescues a few blocks away. Across the street, elderly parents were rescued, I am told, by some mysterious Israeli who sent a giant truck to pick them up (the tracks on their lawn measured several feet across).

My psychiatric practice which is normally booked weeks ahead, but when I went into the office on the day after the rain stopped, only one patient showed up all day. I can’t imagine how homes will sell in this neighborhood due to multiple floods. We have great schools nearby and a well-run community but it’ll be a tough market for the near future.

Plenty of friends had homes or cars that flooded, or both. I’ve been spending my day volunteering: medical staff for the large shelter at the football stadium that recently hosted the Super Bowl, driving supplies from the Jewish Community Center to neighbors or friends who are packing up their ruined home, or helping with clean up.

Q: What kind of damage did Jewish communal institutions and neighbourhoods sustain? How is the Jewish community responding?

A: Still being assessed at the moment. In the neighborhood where many Houston Jews live, 150 blocks sustained damage. Willow Meadows, which contains United Orthodox synagogue, is a wreck. The Shabbat observant community around Willow Meadows saw flooding to the top of one-story homes. Some homes that were “built up,” either raised five feet or built new at an elevation that high, still flooded. Our shul includes a number of Canadian transplants, especially from Montreal, who moved here years ago to work in the medical community.

I just returned from a restaurant where I ran into the the retiring senior rabbi of the largest Conservative synagogue in North America, Cong. Beth Yeshurun, and the CEO of Jewish Family Services. Both of their homes flooded. Beth Yeshurun, Cong. Beth Israel, and perhaps other synagogues also were damaged.

The Jewish Community Center flooded in its lower level, gym and racquetball courts. It remains the donation and distribution site for relief supplies.

When I visited the NRG football stadium today to assist in the shelter operations, and stopped at the JCC to pick up cleaning and packing supplies for friends, I was impressed with how well-run were the programs. Unfortunately, they’ve been through this before. Houston welcomed Hurricane Katrina’s victims in 2005 from New Orleans, and the JCC has helped Jews and non-Jews in this neighborhood during past floods. Each time we recovered, and will surely do so again this time.

I know that people all over North America, including Jewish communities, are thinking, praying, and supporting us at this time, and people in Houston are greatly appreciative. The Jewish Federation collects donations through houstonjewish.org, and the orthodox Jewish synagogue through uosh.org.

Editor's note: Jewish Federations of Canada - UIA currently has a fundraising campaign to help Houston's Jewish community. You can donate to the Hurricane Harvey Relief Fund by clicking here.