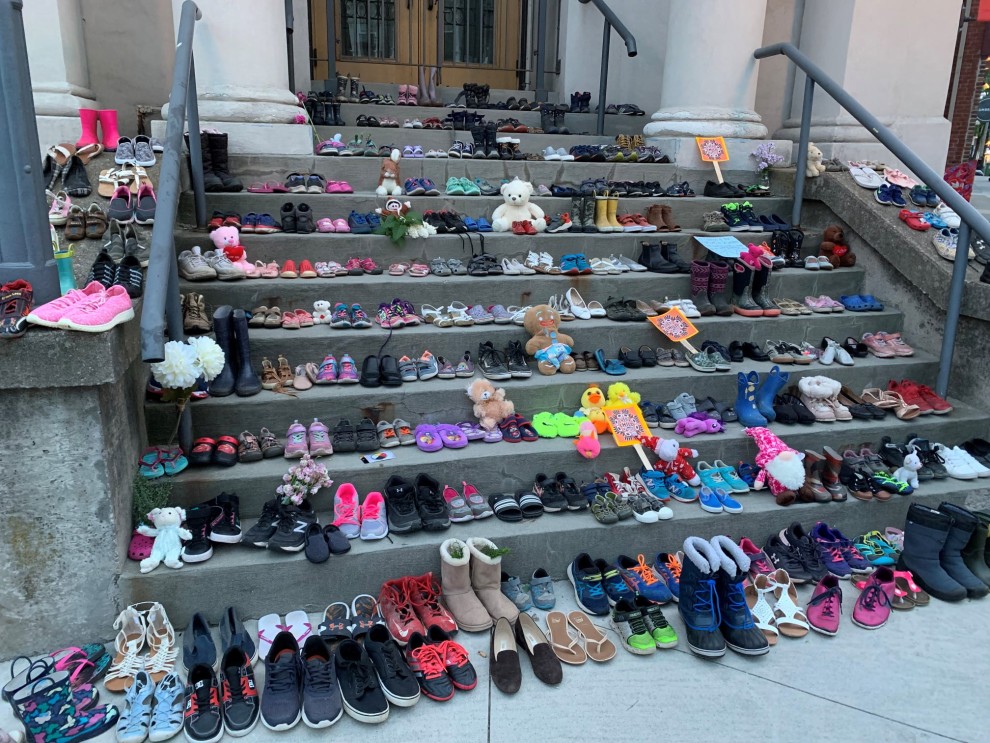 Hamilton’s rabbis have joined a nation-wide shudder of revulsion at the discovery of the bodies of 215 Native children at a former residential school site in British Columbia.

In a joint solidarity statement released recently, the pulpit rabbis called on authorities to study the grounds of every one of the 139 Indian Residential Schools across the country to ensure there are no more secret graves.

The tragedy of those schools, they wrote, should strike Jewish hearts because it is a story too often reflected in our own history.

“The Jewish community remembers only too well the en masse forced removals and displacement of our children from their parents and families, as well as the inhumane conditions in which these children were kept until they met untimely, violent deaths and were buried in unmarked graves, unreported.

“Our people were killed in the name of enlightenment as the Final Solution to the Jewish Question, not at all unlike the Indian Problem spoken of by the Canadian, Duncan Campbell Scott, who ran the residential school system from 1913 to 1932. His stated goal was “to continue until there is not a single Indian in Canada that has not been absorbed into the body politic and there is no Indian question, and no Indian Department...”

“We similarly cannot forget the many centuries of attempts of the Catholic Church to forcibly convert us and our children to Christianity and to eradicate our religion, heritage and culture, identical to the self-stated goals of the Catholic and Anglican Churches, who ran Canada’s residential schools designed to “Christianize and Civilize” the Indigenous peoples, to make them “intellectually, morally and religiously elevated” and not allow them to “perpetuate the manners and customs of their ancestors”

The Indian Residential Schools were created in 1870 with the goal, in the words of Sir John A. Macdonald, “to remove the Indian from the child” and prepare them for civilization and Christianity. Indigenous children were forcibly taken from their families and committed to the care of these church-run schools. As many as 4,000 died over the years from diseases such as tuberculosis. Many also died from exposure after trying to run away and return to their families.
The Kamloops school, one of the largest in the country, was run by the Roman Catholic Church. It was thought 51 children died there, but over the Victoria Day long week members of the community, using ground penetrating radar, discovered a mass grave holding 215 bodies.

The RCMP is now investigating the discovery.

Rabbis Jordan Cohen, Hillel Lavery-Yisraeli, Daniel Green and Aaron Selevan noted the Jewish teaching “that every life lost is an entire world lost,” adding the discovery calls for more than thoughts and prayers.
“It is well that Canada is finally taking responsibility for its injustices, yet this recognition comes much too late,” they wrote. “In keeping with the spirit and intent of the Truth and Reconciliation Commission, the responsible authorities must examine each and every residential school site, and the identities of the children must be confirmed. We also still wait for the Church to accept responsibility for its large part in it. Regardless, nothing will ever undo the horrors.”
Vancouver’s rabbis expressed similar sentiments late last week at a memorial service on the playground of a community school.

They coupled their prayers, however, with calls for concrete action to correct a historic injustice.

“The greatest gift we can give these children is words of condolence, but acts of conscience,” said Rabbi Dan Moskovitz, chair of the Rabbinic Association of Vancouver and Reform Rabbis of Canada. “We have to make our prayers real not in heaven, but here on earth.”

The Vancouver memorial was held on the playground of the city’s Talmud-Torah school before a live audience of Grade 5 students and an online crowd.

“The sounds of children at play normally fills this space every day,” Moskovitz said. “Its silence now cries out to us from those souls whose childhood was ripped away.”

Moskovitz shared Friday’s podium with four other Vancouver rabbis and Member of Parliament Jody Wilson-Raybould – an Indigenous member of the House of commons whose family suffered the outrages of the residential school system.
“The residential schools are a very dark part of our history,” she said. “I am angry and frustrated and have a deep sense of sadness about this.”

“We know that this was not an isolated incident and that more will be discovered.”

They also want immediate action to implement the recommendations of the 2015 Truth and Reconciliation report. Those proposals include providing $1.5 million for ground penetrating radar studies of all 139 school sites.

“So far none of those recommendations have been acted on. After all that we have spent responding to the COVID-19 pandemic, a million and a half dollars is nothing,” Moskovitz said in an interview after the Vancouver service. “We must do this because we need to move from words to deed.”

Specific actions endorsed by Reform Jewish Communities of Canada include calls to reach out to Indigenous communities, to learn more about the history of Canadian treaties, creation of reconciliation teams at synagogues, making donations to the Indian Residential Schools Survivors Society and pressing all levels of government to implement the Truth and Reconciliation report proposals.

Nina Kreiger, executive director of the CIJA-sponsored Vancouver Holocaust Education Centre, said the Shoah and the history of injustice to Indigenous communities create a responsibility to act.

For the Vancouver centre, that call to action has included sponsoring several educational symposia featuring survivors of the Holocaust speaking alongside survivors of residential schools.

The need is even more pressing now, she added in an email exchange.

“The discovery of the 215 children in Kamloops is sharpening the collective focus on the need for concrete actions both to address the injustices of the past and to address the legacies that continue to affect Indigenous people,” she wrote. “It has increased and in no way diminished the opportunity to advance the truth and reconciliation movement, and also opportunities for intercultural partnerships dedicated to eliminating discrimination and building a more just, inclusive society.”

Cutline: A spontaneous memorial on the steps of the Carnegie library in Dundas to the 215 Native children whose bodies were recently discovered in an unmarked mass grave at the site of a former resident school in Kamloops, British Columbia. Photo courtesy of Dana Robbins, Dundas.