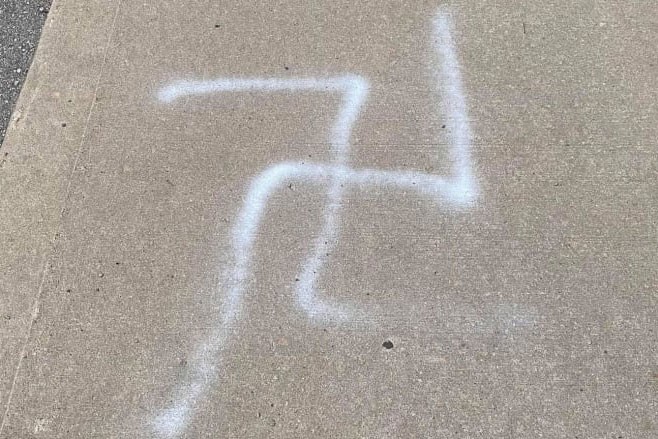 Swastikas and Confederate flags are to be banned from public property in Hamilton under a hate anti-hate strategy unanimously approved Monday by a city committee.

It’s all part of a thrust to dethrone Hamilton as the hate crime capital of Canada.

“There is a real need to address something that has become a high priority for the city,” consultant Rebecca Sutherins said. “Since 2019, reported hate crime statistics for Hamilton have been becoming quite alarming.”
That’s the year the Steel City, or the Ambitious City, was dubbed the country’s hate crime capital after Statistics Canada reported on 2018 figures showing a 6.6 per cent increase in police-reported hate incidents in Hamilton compared to an overall 13 per cent decrease across the country. With reported incidents averaging 17.1 per 100,000 population, the rate in Hamilton was more than three times the national average.
In 2020, there were 80 hate/bias incidents reported to Hamilton Police. The number includes both suspected hate/bias incidents and criminal offences. Blacks and Jews continue to be the communities most targeted by such incidents.
One such incident was a graffiti attack on Beth Jacob Synagogue during the High Holy Days last year. Two men have been convicted of a hate crime in that incident. They are due in court for sentencing Sept. 30.
Hamilton police are also joining the drive by announcing the formation of a new Hate Crime Review Committee.
To vacate that odious title, Sutherins’ company has offered a strategy of 18 policies. The list includes calls for a specific action plan “to take these recommendations and move them into real life;” to get more diverse voices on city decision-making bodies, to move resources from responding to hate incidents to prevention initiatives such as support for social services around affordable housing, addictions and mental health; to increase education against hate crime and to develop a uniform way of reporting hate crimes that does not always require dealing with police.
A specific plan to implement those goals is to be presented to city council in October.
Mayor Fred Eisenberger has already taken one step in hate mitigation by mandating the adoption of the International Holocaust Remembrance Alliance definition of antisemitism for use in his office. Adoption as a city-wide policy is still being studied.
The city actions drew general praise from a handful of agencies appearing before the committee.
“The time for this is now,” said Kim Martin, executive director of the city’s Social Planning and Research Council.
“Hamilton cannot wait to take action on this issue,” she added, if for no other reason than the odious title hurts Hamilton’s chances for economic development.
Sandi Bell, of the newly revived Hamilton Anti-Racism Resource Centre, also backed calls for strong action.
“We need our elected leaders to move beyond words to action,” she said. “The data is clear, there is an urgent need for coordinated action.”
In a report backing the ban on hate symbols, city staff said municipalities around the world are looking at such steps to help ease the mounting fear felt by some residents.
“Like many communities across the country and around the world, Hamilton is also increasingly tested and challenged by incidents of hate, racism and discrimination,” the report said. “While these acts are perpetrated by a very few, their actions nevertheless affect all Hamiltonians by impugning the city’s reputation and diminishing community sense of belonging for many equity-seeking populations.”
The report also held such a ban doesn’t impact freedom of expression clauses of the Charter of Rights because it applies only to public spaces. The ban gives the city the sole discretion to decide what is hateful and to remove those signs and symbols without notice.
The committee’s ban and acceptance of the consultant’s report must still be formally endorsed by city council.