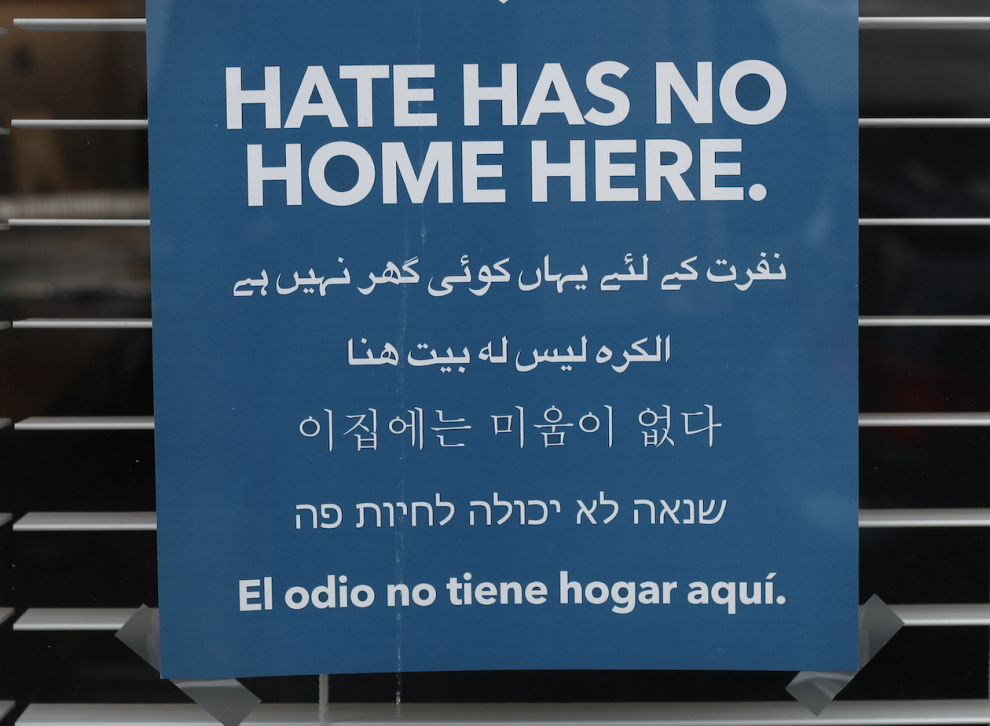 Swastikas scratched into playground equipment, hate messages written on cars or posted on the door of Burlington City Hall, insults being yelled at Jews on the street and yellow-vested hatemongers crowding into a public space every week to shout against gay marriage and Jews.

Against that evidence it’s not hard to understand, and fear, recent statistics branding Hamilton as the hate crime capital of Canada.

That’s how Kojo Damptey, program director of the Hamilton Centre for Civic Inclusion sees it.

“Hamilton seems to be a breeding ground for hate and alt-right groups,” he said in a recent interview ahead of the launch of the No Hate in the Hammer campaign. “What’s happening today is very, very frightening.”

The available numbers bear out Damptey’s fear. Statistics Canada recently reported a 6.6 per cent increase in hate incidents in Hamilton, compared to an overall 13 per cent decrease across the country (from 2,073 incidents to 1,798). The local rate followed a hike of 30 per cent in 2017.

With reported incidents averaging 17.1 per 100,000 population, the rate in Hamilton was more than three times the national average.

Jews remain near the top of the target list. The 2018 statistical report by the Hamilton Police Service shows 125 hate-related incidents reported in 2018 – that’s down eight per cent from 2017. The list includes 49 incidents where people were targeted because of their religion – 30 of those events targeted Jews.

Of the 125 incidents reported in Hamilton, only five are recorded as actual crimes, including assault, assault with a weapon, dangerous operation of a motor vehicle and sexual assault. The balance are recorded as incidents where hate appeared to be a motivating factor.

A similar 2018 report for neighbouring Halton Region, with a Jewish population of about 2,500, notes 34 hated-related incidents in the region. The incidents are not broken down by motivation.

Most hate-related incidents involve “petty” crimes, such as property damage, including graffiti, and the vast majority remain unsolved even when they are reported to police.

Sgt. Paul Corrigan, of the Hamilton Police Service, Hate Crime and Extremism Unit, said in an email exchange that all of the antisemitic incidents in Hamilton in 2018 involved mischief graffiti, a crime that’s difficult to solve.

“The clearance rate is low because this type of offence is invariably committed at night, in an area without CCTV, at the back of the school or park, and without witnesses. Mischief graffiti is a criminal offence and the antisemitic nature of it makes it even more odious,” he wrote. “I think that this type of offence has an effect on the wider community and can instill fear in community members. This is why it is recorded by the Hamilton Police Service and treated with a high priority.”

While these events may be considered “just vandalism,”  he said, “the wider effect can be hurtful to the community. Educating young people and attempting to identify the perpetrators of this type of crime will help in bringing these numbers down.”

“Unfortunately, prejudice against groups and individuals because of their race, religion or sexual orientation is a human condition,” he said in an email exchange. “For me, the good news is that here in Hamilton people are rising up against hate, and standing up to promote tolerance and inclusion.”

Most importantly,  Rymberg  continued, “is not to stand by in silence. Apathy will be interpreted as endorsement. It’s our responsibility to expose and denounce hate towards any group. We should also look deep inside ourselves and examine our own biases to see how we may inadvertently be contributing to intolerance. It all starts with us.”

One incident that gained widespread attention happened in June when anti-Semitic graffiti was scrawled across the doors and playground of St. Bernadette Catholic Elementary School on Governors Road in Dundas. A short distance away, the same filth was etched into playground equipment at a Dundas park.

Another incident, across the bay in Burlington, saw six separate events in which antisemitic hate messages were scattered around the city. A Burlington resident has been arrested in connection with that spate of hate crimes and police continue their hunt for a second man.

Also raising local fears was the revelation that a man with a history of ties to a racist and white supremacist group was working in the City of Hamilton’s information technology department. Marc Lemire, a former leader of the virulent neo-Nazi Heritage Front, has since resigned.

Local leaders admit they are puzzled to explain this stain on Hamilton’s reputation as a good place to live. Corrigan, for one, puts the increase down to the overall increase in global antisemitism.

“I think there is an increase in anti-Semitism worldwide. This, coupled with ignorance of the hurt that this type of offence causes has contributed to a steady stream of antisemitic graffiti over the last few years.”

“There’s no clear answer as to why,” said Rabbi Jordan Cohen, of Temple Anshe Sholom. “Nobody really gets it. Maybe it’s because there has been a change in the area’s population and there’s a segment of society that always finds that frightening.”

While all of the city’s Jewish institutions have suffered some anti-Semitic incidents, Cohen cautions the community to be vigilant but not to over-react.

“The Temple has been the target of some pretty terrifying hate mail, but the information we’re getting from the local police and CIJA is that those things very rarely lead to something more,” he said.

Whatever the causes of the hate spike in Hamilton, community activists are clear governments at all levels have to take firm action to let opponents of diversity know their views are not welcome.

“What’s happening is obviously alarming to a lot of people who live here,” said Hugh Tye, executive director of the Hamilton Community Legal Clinic. “As a community, we’re starting to say this is not OK, that Hamilton is not a place of hate, that we’re not going to sit here quietly and let them go about their business.”

The legal clinic, along with the John Howard Society of Hamilton, Burlington and Area, the Hamilton Roundtable on Poverty Reduction and Hamilton Centre for Civic Inclusion, with financial support from the Hamilton Community Foundation, recently staged the No Hate in the Hammer meeting to bring together groups opposed to the current trend.

“We have to start somewhere. That means talking about it, figuring it out and talking about the actions we need to take,” Tye said. “We’ve collected a lot of names of leaders in the community, people who actually want to see action, not just talk about the effects of hate, they want to see some action.”

Hate issues in Hamilton will also be the focus of a peace conference planned for Oct. 4 to 5, where former Ontario Premier Bob Rae is a keynote speaker, along with Dr. Barbara Perry, director of the Centre on Hate, Bias, and Extremism and Bernie Farber, of the Anti-Hate Network.

While community groups plan meetings and conferences and call for clear statements from government, a group of Dundas moms took more direct action when they heard of the vandalism at their school. After one posted pictures of the ugly words on Facebook a group rushed to the school, scrub brushes, in hand and removed the hate.