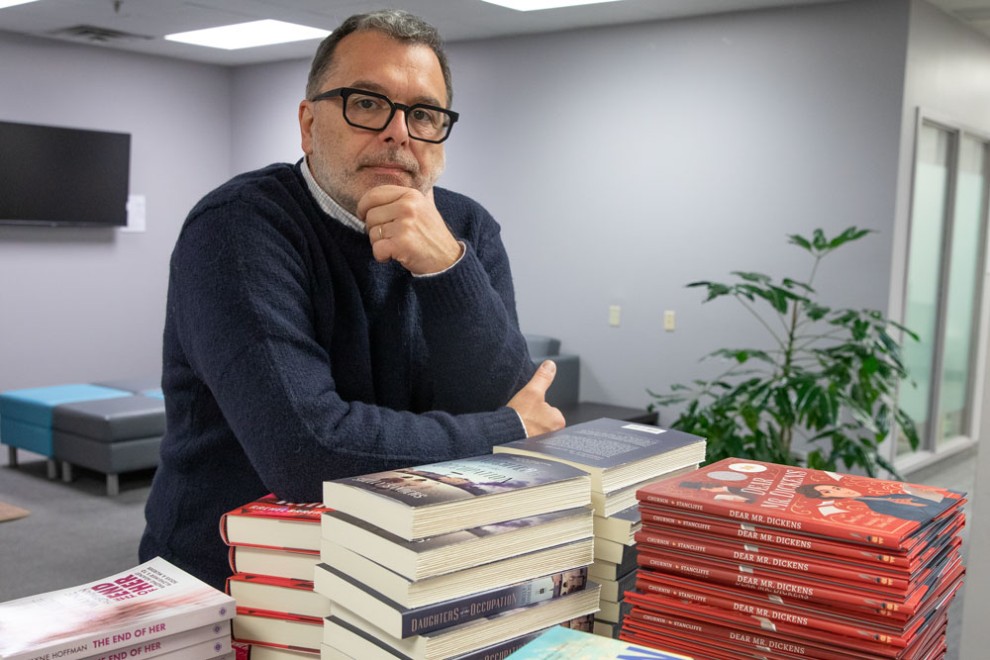 When Gustavo Rymberg took on the role of Hamilton Jewish Federation CEO back in August 2017, he told Federation president Jacki Levin that he wanted to transform Jewish Hamilton. This would turn out to be no empty promise.

In the five years during which he’s occupied Jewish Hamilton’s top communal position, Rymberg has orchestrated an impressive list of accomplishments so extensive that the Federation board recently voted to extend his current contract to March 2028. The decision, according to Federation vice president Jason Waxman, was unanimous.

“It’s not only that we wanted Gustavo to stay on, but we really needed him to stay on,” he said. “Over his initial contract period, he’s really taken ownership of the role in a way that benefits the whole community … There’s a lot of passion there and I think the entire Hamilton Jewish community is better off.”

A native of Argentina, Rymberg began working his way up the Jewish communal ladder not long after he and his family moved to Winnipeg in 1997 as part of an initiative to grow the city’s Jewish community.

“What the Winnipeg Jewish community did for us the moment we arrived was incredible. It’s one of the reasons I appreciate Federation,” he told the HJN in 2017.  Rymberg eventually took on a part-time marketing position for the then newly opened Asper Jewish Community Campus, which also became the moment he envisioned a new career path for himself that he dreamed would culminate in becoming the CEO of a Jewish Federation.

Over the next two decades, Rymberg pursued his goal with single-minded focus in a trajectory that included five years as marketing and membership director with the Ottawa JCC and seven years heading up marketing, programming and revenue development for Toronto’s two northern Jewish community campuses, and culminating in his being hired for the CEO position at the Hamilton Jewish Federation.

The beginning of his tenure could not have come at a more opportune moment. The Lower Lions Club JCC had been sold two years earlier, leaving the community without a neutral gathering space for events and celebrations. Federation staff were working out of rented office space and the Annual Community Campaign had stayed at the same levels for as long as anyone could remember.

But Rymberg proved to be up to the task. Over the next three years, he brought the dream of a Jewish community campus that much closer through the creation of JHamilton, a money-saving venture that saw four Jewish organizations share space. He implemented the long-talked about merging of the Hamilton Jewish Federation and the JCC, brought an influx of younger members into the Federation board of directors, facilitated the establishment of new strategic priorities that reflected the Jewish community’s changing priorities, and launched a number of innovative community programs, such as the Marvin Caplan Jewish Book Festival and the Hamilton Jewish Film Festival. But the most tangible manifestation of Rymberg’s leadership has been the unprecedented growth in Federation’s Annual Community Campaign.

“When Gustavo first came, the Campaign was just over a million dollars and last year it was $1.7 million, which is almost a 70 per cent increase in four years. That’s because of him, really,” said Federation treasurer Lorne Rochwerg.

Jason Waxman echoed that sentiment when he called Rymberg a fundraising “rock star.”

“Every year he breaks his own record, which is just better for all the beneficiary organizations. He’s consistently raised the bar for himself and for all the volunteers working under him ...  I think most people think he’s never going to get there and he always gets there. It’s really impressive.”

But the word most often used by the individuals interviewed for this article to describe Rymberg is “visionary.” When the HJN spoke with Lorne Rochwerg days before the inaugural #nomoreantisemitism conference that Federation hosted in late November, he recalled the skepticism among board members when Rymberg first articulated the possibility nearly two years ago.

“He’s pulled it off,” said Rochwerg.  “It’s amazing. It’s really putting Hamilton on the map and that’s because of him and his vision.”

Jacki Levin couldn’t agree more.  “Having just put Hamilton on the Jewish world map,” she said, “Gustavo is not one to rest on his laurels. He is working to deliver even more exciting programs and to reach out to the unaffiliated, the marginalized, and  the vulnerable. He loves this community and we certainly love him.”