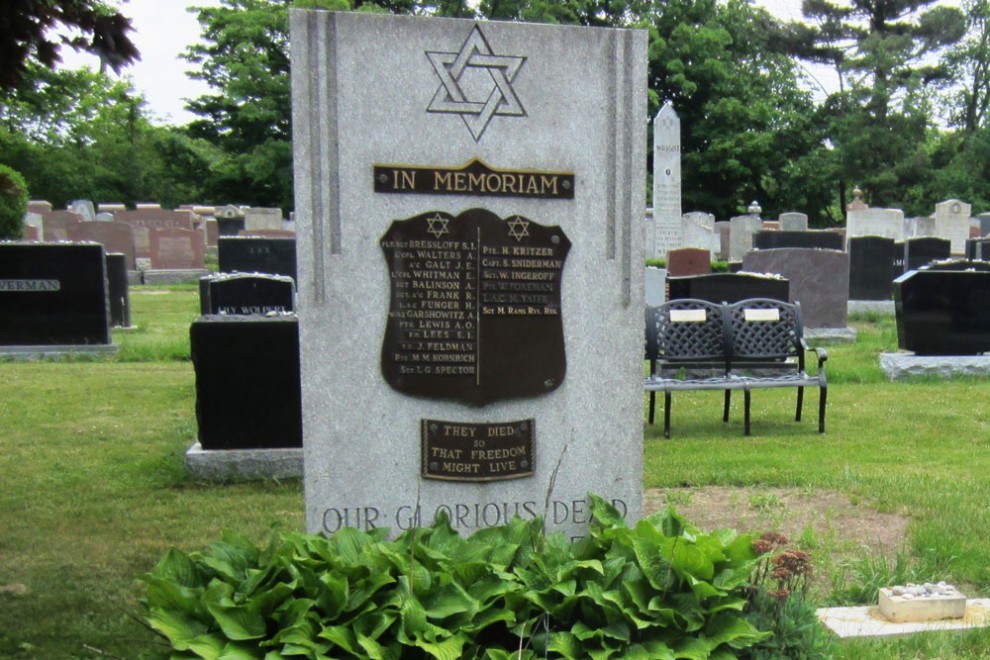 Seventy five years ago, on June 6, 1944, in an attempt to break the Nazi stranglehold on Western Europe, Allied forces invaded the coast of occupied France with nearly 150,000 troops.  The D-Day invasion was finally underway and in less than a year, Germany would be defeated.

Under the code name Operation Overlord, Allied troops from eight nations, including 14,000 Canadians crossed the English Channel and hit the Germans with everything they had. By the end of the battle, 359 Canadian troops had been killed and another 715 wounded.

Throughout our country’s history, the members of Hamilton’s Jewish community have repeatedly stepped up to do their part in maintaining peace and democracy here at home and around the world. Over the years, thousands have served and many have died for the greater good.

Near the entrance of Beth Jacob Cemetery, there is a cenotaph commemorating 19 Hamilton Jews who died while serving our country. Emblazoned with the motto, “They Died So that Freedom Might Live,” the monument is a permanent reminder of the sacrifice they made on our behalf.

Among the honoured is Royal Canadian Air Force (RCAF) Warrant Officer, Class 2 Abram Albert Garshowitz. A wireless radio operator for a Lancaster bomber crew, Garshowitz died on May 16, 1943, during the famous “Dam Buster” raid. Prior to embarking on that historic mission, Garshowitz chalked this fitting inscription on one of the bombs that would severely cripple the German war industry in the Ruhr Valley, “Never has so much been expected of so few.”

As the last of the “greatest generation” pass through the twilights of their lives, it is important to not only commemorate them, but to appreciate their heroic actions.  Whether we reflect on the bravery of Canadians at Vimy Ridge, Dieppe, on Juno Beach, in Korea or more recently in Afghanistan, we must remember everything they sacrificed so that later generations continue to live in the peace and security they fought so hard to ensure.

Events and ceremonies will be held here in Hamilton and around the world commemorating the 75th anniversary of the D-Day landing.  From a gala celebration at the local Canadian Warplane Heritage Museum to various excursions to the Normandy battlefields, including several focusing on the contributions of Jewish soldiers, there are so many ways to remember this important time in history.