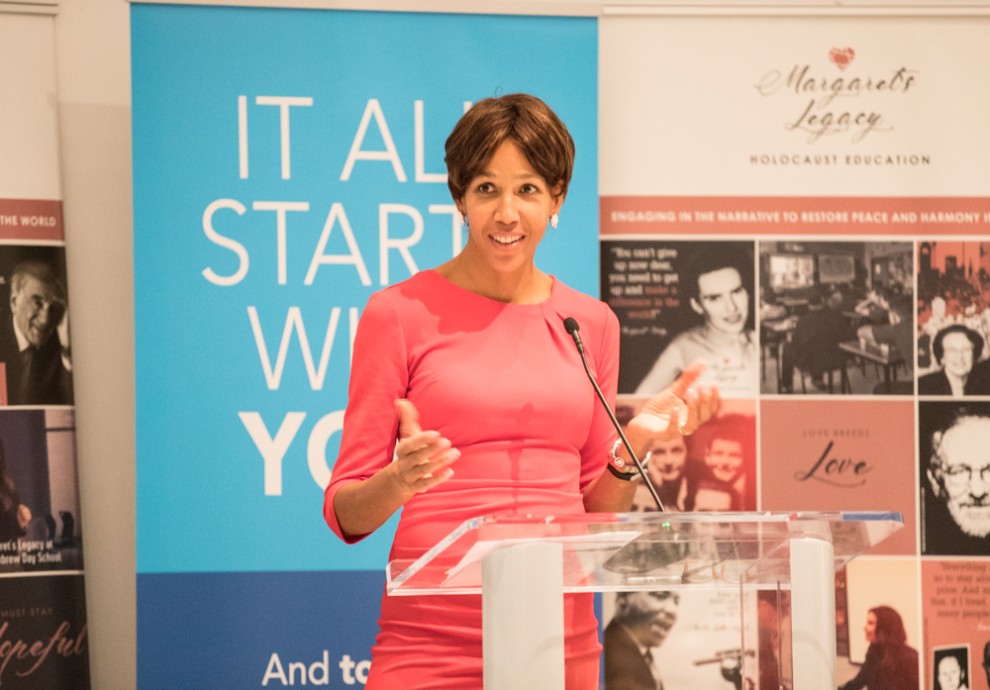 January 2018
by Steve Arnold
A stone monument is all that remains of the Nazi concentration camp where Jennifer Teege’s grandfather murdered thousands of people.
For years she hid her connection to that terrible time but today, as the ranks of Holocaust survives thin with every passing year, and as new waves of Nazi-like politics spread across Europe and the United States she has shed the cloud of depression that stalked her for years and hopes to challenge those trends by telling her story.
Teege brought that tale to Hamilton on International Holocaust Memorial Day, telling a local crowd the fanatical hatred that drove her grandfather Amon Goeth to randomly shoot inmates of his Plaszow concentration camp and to let his specially trained dogs tear the throats out of others is alive and growing today.
“This is a story I am not allowed to take to my grave. It has to be told,” she said. “We live in really dangerous times today -- to see that you don’t have to cross the ocean, you just have to cross the (Canada-U.S.) border.”
There and in Europe, she said in an interview after her presentation. Troubled times are being raised by populist leaders offering simple solutions, and fear, to populations concerned about their future. Such attitudes have given rise to Donald Trump in the United States and even a new right-wing party in the German parliament.
“The world is going in a direction that is very scary. It’s not too late to change yet, it’s 5-to-12 or may be even 3-to-12, but we can change. The rise of a new right-wing party in the German parliament is not something we ever thought would happen, she added. “In historical terms so little time has passed and yet now we have a right-wing party in the German parliament again. It is just unbelievable. It’s a global development where things you were not allowed to say or two a couple of years ago are now completely legitimate again in the eyes of some.”
Teege said telling the story of her family’s Nazi past is one way of dealing with both the terror of the Shoah while warning about a future where populist leaders stir hatred by offering seemingly simple solutions to complex problems.
“It just comes very naturally to me. It’s not like a burden or something I feel. I am scared, like everyone else, about the way the world is changing,” she said.
Teege noted some families with direct connection to high ranking Nazis have tried to hide their family histories, or have taken even more drastic action – the great-niece and nephew of Hermann Goering, for example, decided to have themselves sterilized rather than continue what they saw as an evil bloodline.
While she won’t condemn such actions, calling them “a very personal decision), Teege said a better way to deal with such trauma is “to be positive, to set a positive example.”
Finding the positive in her own twisted family tale required years of research and refection after she learned the truth by randomly picking a book off a shelf in Hamburg’s main public library.
Born in 1970 as a result of her mother’s brief romance with a black Nigerian, Teege was raised in orphanages and by an adoptive family. She was nearly 40, married and with children of her own, when she learned the truth of her background.
Her grandmother, Teege learned had been a secretary in the enamelware factory of industrialist Oskar Schindler who carried on a two-year affair with Goeth. A daughter was born of that affair who later had a romance of her own with a black man from Nigeria.
Having a black grand-daughter, Teege realized, would not have been tolerated by a racist like Goeth.
Discovering she is a direct descendant of a man responsible for thousands of murders during the Shoah sent Teege into a major depression, followed by a search for the truth of her lineage. That search resulted in her book entitled My Grandfather Would Have Shot Me: A Black Woman Discovers Her Family's Nazi Past and a new career as a Holocaust educator.
“In the beginning it was something I kept secret because I was so overwhelmed by it. I needed some time to come to terms with what I found out,” she said. “I needed some help and had some psychological therapy.”