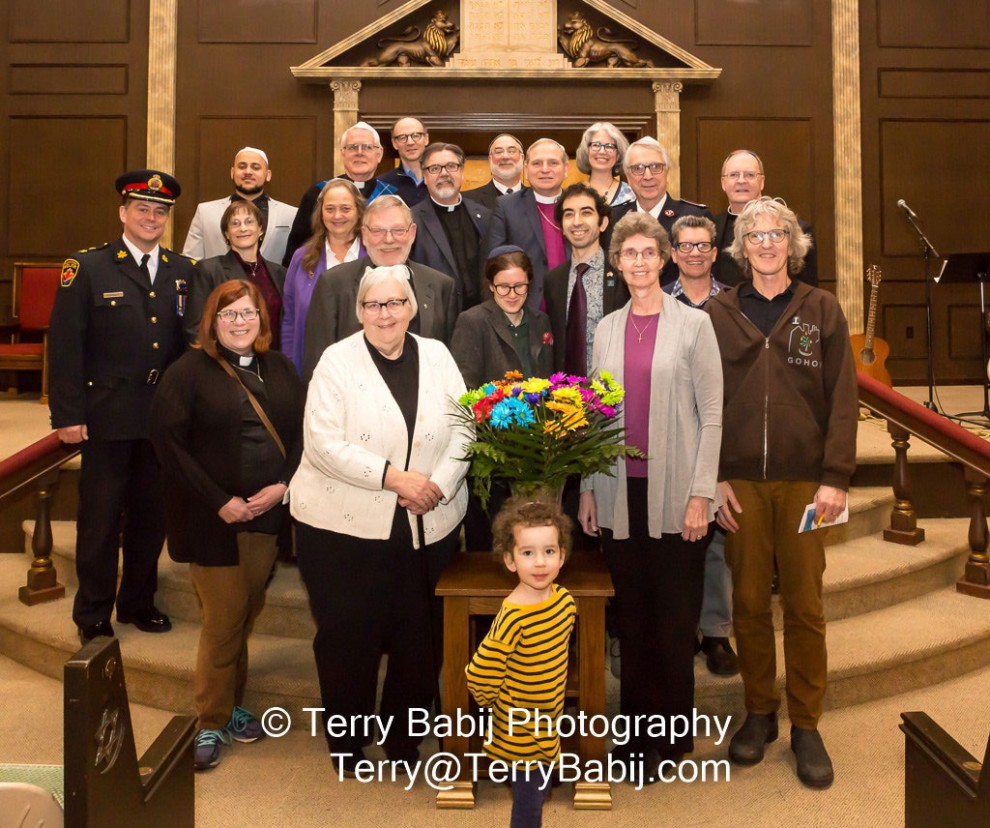 An estimated 300 people of many different faiths packed Beth Jacob’s main sanctuary Wednesday evening for “The Blessing of Co-Existence” – an interfaith prayer service organized by the Social Planning and Research Council of Hamilton and Hamilton Faith Communities in Action, chaired by Deirdre Pike, who served as moderator for the evening. A number of Hamilton’s rabbis were in attendance, as well as representatives from the Hamilton Jewish Federation, McMaster Hillel, and the JCC.

I opened the evening by welcoming the guests to the synagogue and recalling that the Temple in Jerusalem was described as “a house of prayer for all the nations.” I explained that the title of the evening, “The Blessing of Co-Existence,” was meant to emphasize that co-existence was not a situation we merely tolerate for lack of practical alternative, but a blessing, and something we should actively seek. I noted that our goal, when doing interfaith work, need not be searching for the similarities between religions. We can be completely different and still should live together in peace and harmony. People deserve respect simply by virtue of their being people.

In her remarks, Pike said that we were here "because a whole bunch of faith leaders had the courage to come together around one issue, at City Hall, around the inclusion of transgender and gender non-binary people, and from that groundswell, through an invitation by Rabbi Hillel, (we gathered again) to say, What else can we do? We're engaged in this; there must be a way we can make other positive changes in our communities."

Yvonne Maracle, representing the Mohawk Nation, reminded those present that they were on the ancestral lands of her people, and noted that her people have been practicing co-existence with visitors for 500 years. She then recited a traditional Aboriginal prayer thanking the Creator for our lives, and for the various aspects of nature which we need to survive.

Greetings were also delivered by City of Hamilton Ward 1 Councillor Aidan Johnson, as well as from the Hamilton Police Service by the Deputy Chief of Police Dan Kinsella. Rev. Victoria Ingram, minister of the First Unitarian Church of Hamilton, led us in a symbolic ritual stemming from her faith tradition, in which leaders representing different congregations and faith organizations ascended the Bimah and inserted a flower into a large vase, creating a multi-coloured bouquet, representing the bouquet of religions and ethnic groups we wish to live in, here in Hamilton.

The Dean of the Anglican Diocese of Niagara and rector of the Christ Church Cathedral, the Very Rev. Peter Wall, gave a sermon about the religious importance of peace and respect no matter what a person believes, if they believe at all. Revs. Andy Crowell and Christina Paradela of the United Church led those gathered in an interactive personal prayer session in which, after some moments of meditation on the concepts of blessing, peace and co-existence, congregants were invited to compose their own, short prayer by writing it on a card provided to them, and then were told to share their cards with their neighbours. Imam Hosem Helal, who mentioned that it was his first time inside a synagogue, recited a Muslim prayer in Arabic and English, praising God for creating peace. He noted how we all have the same blood flowing through our veins, and so we are not that different.

The evening’s service was liberally punctuated with beautiful music throughout. Brother Peter Tigchelaar, osb, an ordained Catholic monk who works for the Sisters of St Joseph, sang a musical rendition of Psalm 122 while accompanying himself on the ukulele. Temple Anshe Sholom’s vocal quartet sang two songs, including this beautiful rendition of One Voice, and the Kehila Jewish Community Day School students sang “Od Yavo Shalom.”

Towards the end of the evening, Rabbi Jordan Cohen raised his hands and pronounced the priestly blessing. Then, together with Brother Peter, I sang an original rendition of the prayer traditionally recited by the Kohanim after their blessing, “Adir Bamarom – Glorious One on High.” Everyone sang along in beautiful harmony.

The evening ended with my blowing the Shofar, after noting that the Torah describes the Shofar’s sound as being employed both in times of trouble and in times of happiness. We hope our communities are able to come together often, not to fight xenophobia, but to celebrate happy occasions together.

Click here to see more photos from the event.