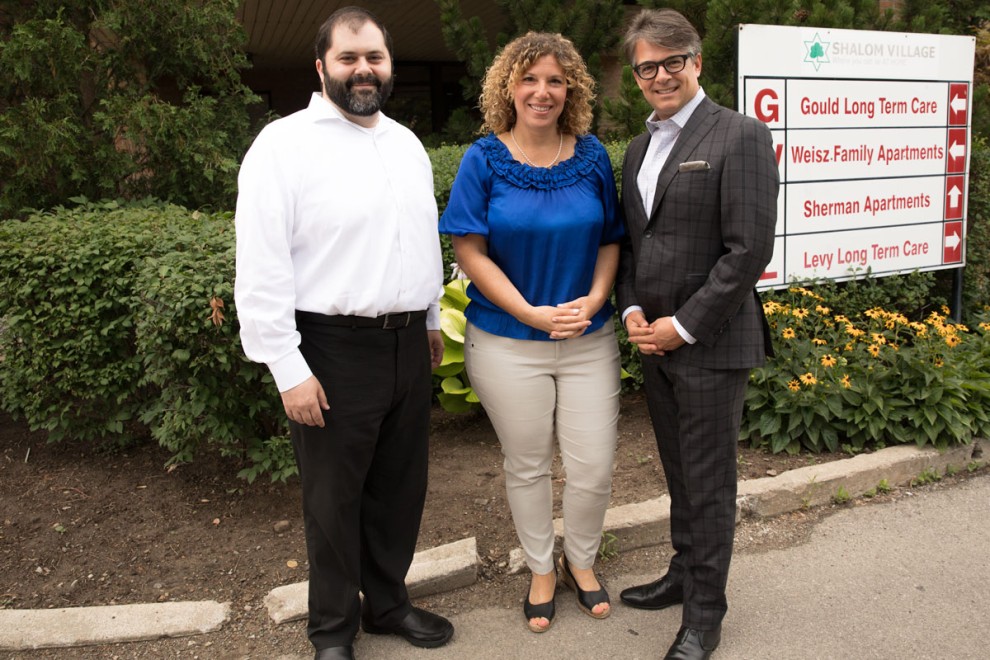 Shalom Village’s new presidents know their term of office is going to revolve around one issue — money. Of course that’s a perennial issue for Jewish community leaders, but for David Horwood and Mayer Michalowicz, who have taken over board leadership of the Macklin Street North campus, it’s going to be even more critical as the 40-year-old home faces a government-ordered redevelopment of its long-term care facility. The project is to be completed by 2025.

“Our term is going to be financially intense,” Michalowicz said in a recent interview. “But, at the end, we’re going to have financial assets that will be good for 50 years so there’s no need to strain to pay for it all at once.”

The update of the Village’s long-term care facility is part of a 10-year provincial strategy to make nursing homes less institutional. Among the new standards are requirements to eliminate rooms with three and four beds, increase the floor space of rooms and provide more ensuite washrooms.

A consultant is busy estimating what work will be required at Shalom Village and how much it will cost. Construction work is expected to start in five years and take two years to complete. Shalom Village’s apartment complex will not be affected. While plans and costs are being studied, Michalowicz and Horwood are laying plans for their community appeal.

“We’re hoping to keep the final campaign to a reasonable ask,” Michalowicz said.

Leading the project will be a refreshed board of directors, including younger members with broader experience than previous panels.

Horwood and Michalowicz represent those changes. Horwood is vice-president of Effort Trust with years of experience in property redevelopment while Michalowicz is an accountant.

Outgoing president Yael Arnold said this is a significant change from the years when the board was dominated by health care professionals and academics.

“Unfortunately, there’s no influx of new funds to pay for all of this, but we have a target date that has to be met,” she said. “We have a very optimistic feeling at the governance level now.”

“We have an excellent facility here with a strong reputation for care, but being five years away from a major redevelopment requires a very different mindset than we’ve had in the past,” Horwood said. “This project is very much part of Hamilton’s renewal.

“Now is the time for us to be as lean and as efficient as possible,” he added.

The allied Shalom Village Charitable Foundation will be involved in raising money for the redevelopment.

Incorporated in 1974 as The Hamilton Jewish Home for the Aged, Shalom Village’s first facility was a single home on Queen Street South. Construction on the Macklin Street campus started in 1980 and the first five residents arrived in December 1981. The building officially opened in 1982. The nursing home component opened in 1990.

Today, the campus consists of 127 long-term care beds and 81 apartments. Seventy-five people participate in day programs and 132 people from the community use the fitness club. The facility employs 258 staff.

About 30 per cent of the apartment units and 70 per cent of the long-term care beds are occupied by non-Jews. Those statistics represent both a challenge and an opportunity in the coming campaign.

“Some people might think that change in demographics will dilute our Jewish values,” Horwood said. “Shifting demographics have always been there but our fundamental values remain very deeply entrenched.”