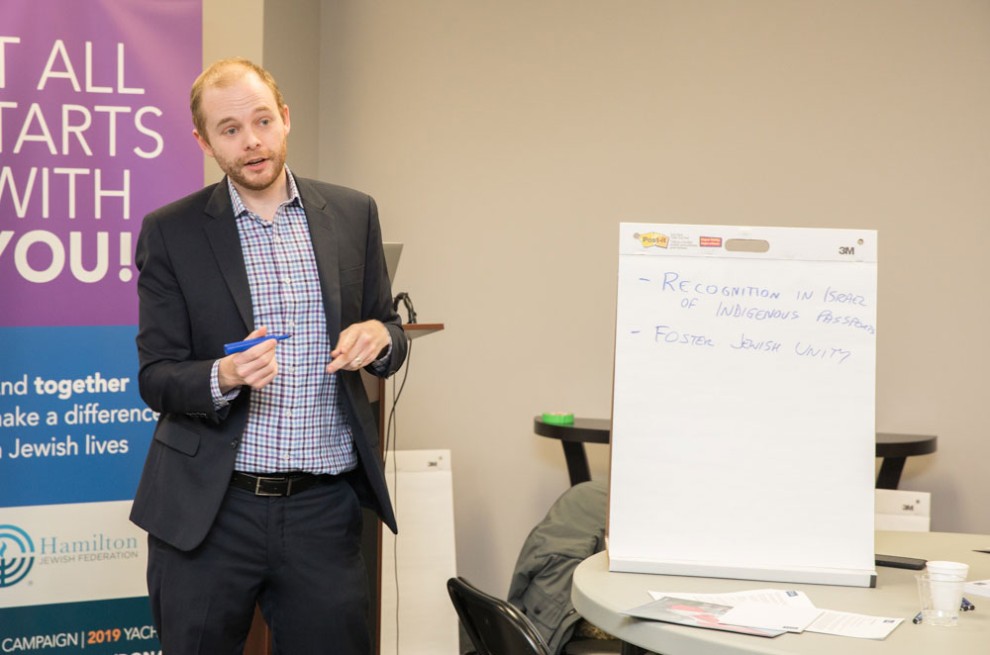 Protection from anti-Semitism and the scourge of anti-Israel campaigns topped the list of concerns on which Hamilton Jews want more action from their chief advocacy agency.
Those were among the issues raised in a community consultation session at JHamilton on March 11, led by Steve McDonald of the Centre for Israel and Jewish Affairs (CIJA).
“This community is very engaged and passionate about its issues,” McDonald said in an interview after the session. “The need for more advocacy here is very gripping and alive.”
McDonald said underlying many of the specific concerns is the need to build alliances with other minorities. Specific examples of that alliance building include supporting Indigenous communities in efforts to travel on their own passports, rather than Canadian documents and supporting the Roma community in preserving the tale of their own Nazi holocaust.
The same thinking, he said, applies to alliances with African-Canadian and LGBT communities.
“Building alliances like this is an absolute priority for us,” he said. “It’s not just a strategic obligation, it’s a moral obligation as well. We have an experience that teaches what can be done in situations like this.”
In a presentation before the community discussion, McDonald said anti-Semitism is a growing problem for Canadian Jews.
Statistics Canada, for example, reported a 60 per cent increase in hate crimes between 2016 and 2017.  Despite the net increase in hate crimes, McDonald added Canadian Jews are still safer than their relatives in other countries.
“By any standard we are safe and secure here in Canada, not like Sweden where a Jew is 20 per cent more likely to face anti-Semitism or France where you’re 13 per cent more likely to be assaulted,” he said.
Canadian Jews may be safe, but they still face a wide range of negative social attitudes, he added.
New, unpublished, research concludes 21 per cent of Canadians still think Jews are too focused on the Holocaust; 23 per cent think we have too much political power and 25 per cent think Jews hold too much economic weight; 27 per cent think Jews have too much influence on Canadian media; 34 per cent think we are too focused on Israel and 47 per cent see us as stand-offish and more interested in helping our own than others.
Not all views are negative however. The same research suggests 87 per cent of Canadians have a positive view of Jewish contributions to the economy; 74 per cent like our support for social programs, 76 per cent praise Jewish cultural contributions and 58 per cent think we face unfair prejudice.
“Canadians recognize that anti-Semitism exists and are disgusted by it,” McDonald said.
McDonald said the ideas raised in community meetings such as the Hamilton event will be used to prepare CIJA’s positions for the federal election to be held this year.
Gustavo Rymberg, Hamilton Jewish Federation CEO, said the purpose of the gathering was to identify the top concerns of the local community, and to draw more attention to the issue of anti-Semitism.