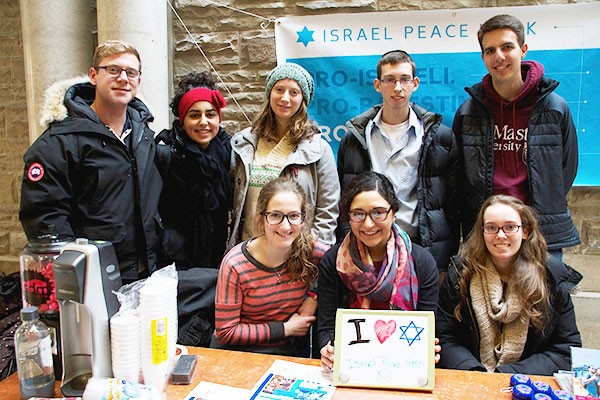 “Jews fear campus nightmare,” screamed a Times of Israel headline this summer, after the University of Cape Town’s umbrella student organization adopted a proposal pushing for BDS measures against Israel for all student-run organizations and events. Closer to home, this August, the Ontario branch of the Canadian Federation of Students, a body that represents more than 300,000 university students in the province, unanimously passed a resolution to boycott Israel.

Even before this summer’s war between Israel and Hamas, a growing number of university student unions across the country had either passed, or, in the case of McMaster, come close to  passing, BDS resolutions. It’s no wonder the Jewish community is concerned about how an increasingly anti-Israel and antisemitic environment on campus is affecting Jewish students, and asking itself what steps are being taken to empower those involved in Israel advocacy.

Those concerns were the central focus of a professional development training organized by Hillel Canada and CIJA in August, the purpose of which was to prepare 50 campus professionals from across the country for what executive director of Hillel Ontario, Donald Sylvan anticipates will be  “a much more hostile climate than they’ve encountered before.”

The need to create a safe space in which students of all political viewpoints can freely express their anxieties and questions dominated discussions on the first day, with participants role-playing scenarios likely to come across their desk.

“I see dead children in Gaza on the television, and the announcer is saying they were killed by Israel. I don’t know what to think,” wrote Sylvan, by way of illustration in a recent article that appeared in  the Canadian Jewish News. “I see photos of demonstrators with signs that say, ‘kill Jews.’ I’m scared,” was another.

“Our central advice,” wrote Sylvan,”was to legitimize the concerns of every student – to talk through the underlying issues without being judgmental. We believe our role is to comfort, educate and prepare our students – not to criticize or judge them. Within the walls of our Hillels, this discourse is crucial.”

The need for inclusivity was  also raised during a telephone town hall meeting organized by UJA Federation of Greater Toronto at the end of August, in which Mark Newburgh, executive director of Hillel of Greater Toronto, said, “We need to be an open tent ...  (in which students can express) their anxiety, their fear, their anger, so that we can nurture them, steward them and encourage them.”

The second day of the workshop focused on  Israel advocacy. The approach focuses on having Jewish students strive to engage in civil discourse  — in contrast to the often guerilla theatre tactics taken up by BDS supporters.

Coalition building is another area seen as critical  to Israel advocacy work on campus. Partnering with other student groups in social action initiatives, for instance, is not only  important in terms of building friendships, but in finding shared values, said Newburgh.

That approach appears to resonate with Raphael Szajnfarber, director of Jewish Student Life at McMaster Hillel, and Alon Coret, a third year Arts and Science student and a member of the executive committees of both McMaster Hillel and Israel on Campus.

“The strategy that we’re going with is ‘hope for the best but prepare for the worst,’” Coret told the HJN.

And what does it mean to prepare for the worst?

“Essentially preparing our connections and our allies  to help us out if things take an ugly turn.”

Sounding calm and confident, Coret was quick to reassure readers that   “everything always looks worse from the outside.”

“I don’t think that community members should be alarmed ... but if things do happen, the best support that can be given is to work in coordination with McMaster Hillel or IOC.”

Szajnfarber was also reassuring. “Fortunately, the Jewish community on campus is more united now than ever, drawn together by a shared sense of purpose and corresponding pride,” he said. “Led by a very committed and sophisticated group of student leaders, the Jewish students at Mac refuse to be intimidated by the anti-Israel movement’s deplorable and unproductive tactics. ”