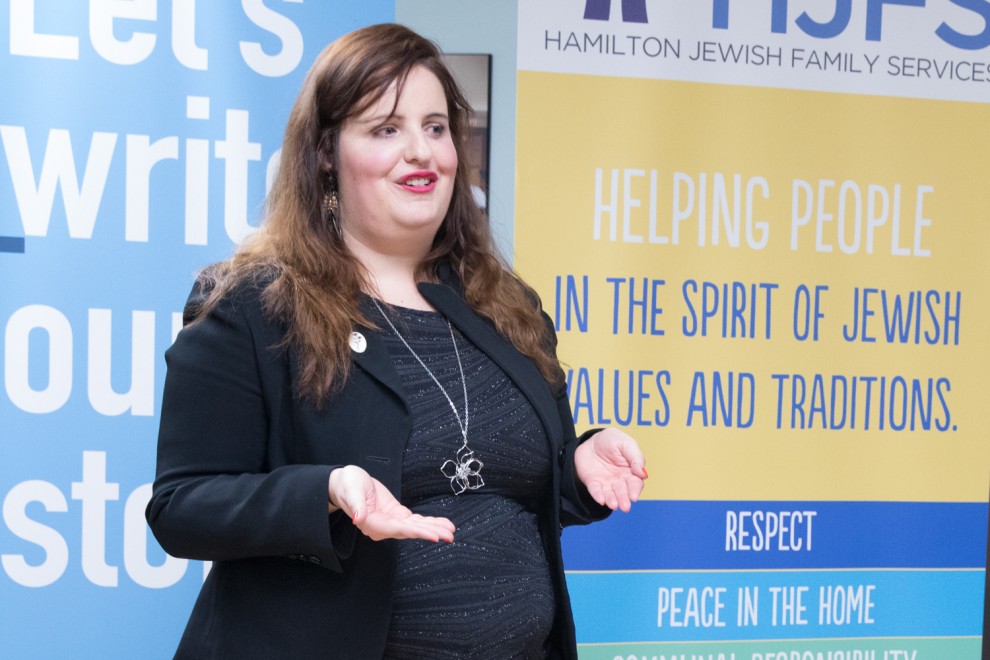 If you want to get something done, it may be a good idea to give it to Alexis Wenzowski.

“The needs of our agency have grown exponentially during COVID-19. So many have lost jobs, been ill and lost income, and demand for our services has grown significantly. Alexis has been a visionary, not only in meeting these needs, but going above and beyond to serve our growing client base,” says Susan Roth, past president of the HJFS board of directors.

Wenzowski was recently recognized for her hard work and dedication as a nominee for the YWCA Hamilton’s 2021 Women of Distinction Awards. The awards were retooled to reflect this year’s theme—The Courage of COVID. The YWCA Hamilton honoured women who have shown exceptional courage in the face of the pandemic with awards in the categories of frontline workers, healthcare heroes, pandemic innovators, community champions and young trailblazers. There was also a lifetime achievement award. Wenzowski was nominated in the Community Champion category.

“When I found out I was being nominated, there really weren’t words to describe how I felt, humbled, privileged, emotional and grateful,” Wenzowski says. “I knew that the nomination from (Hamilton Jewish) Federation was also a testament to the work being done by my team and the impact we were having in the Jewish community and broader community. And, also, that this nomination wouldn’t have been possible without the support of the HJFS team and the community.”

According to Roth though, Wenzowski plays a large part in fostering that staff and volunteer engagement. “Alexis has enticed so many volunteers; young adults who have never volunteered before. Alexis definitely brings out the best in everyone,” says Roth.

With the pause on the hot lunch program for seniors in the agency’s day program, Wenzowski spearheaded the creation of the Kosher Meals on Wheels program, partnering with Adas Israel Synagogue and Hamilton Jewish Federation. With the help of volunteers, local schools and churches, Wenzowski ran the agency’s first community garden project, with the harvest going toward food bank recipients.  Wenzowski also established a distanced grocery pick-up and delivery system.

“In the serious and sometimes heartbreaking work that needs to be done, Alexis still manages to make us laugh. Her humour endears her to both clients and staff and bridges our common humanity,” says Hanna Schayer, president, HJFS board of directors. “HJFS is recognized in the Jewish and larger community as the little engine that could and there is no doubt that the driving force behind that change is Alexis. With a sizable toolbox of skills and smarts, which she delivers with loving kindness, she has made herself as indispensable to the community as any one person can be.”

Wenzowski’s contributions also reach beyond her daily work. A member of the Rotary Club of Dundas Valley Sunrise since January 2020, she took over leadership of one of the program organization teams in April. For two months, she steered the club on Zoom through the new processes required in response to COVID-19. She also envisioned a virtual Victoria Day Fireworks event to adapt the club’s popular traditional community celebration.

In July, Wenzowski joined the club’s board of directors as chair of the International Services Committee. In six months, she finished a project with Six Nations Polytechnic, providing more than $6,000 in support of the school’s robotics project. Her committee has also been pursuing a joint international literacy and community education project with a Nairobi Kenya Rotary Club.

Wenzowski’s interest in making a difference goes back a long way. In high school, she volunteered at McMaster Hospital and at the Westdale Library Reading Program. She says she followed the example of her parents and the many organizations they were involved in.

“My mother and her parents struggled when they first came to Canada. Being poor in the 1950s and ’60s was incredibly stigmatizing and my mom grew up with that. My grandparents both worked really hard and eventually bought their first home on Gary Avenue,” she says. Though life got easier, Wenzowski said her mother and grandparents never forgot how ashamed society made them feel for being poor, how services had let them down and that we all need help sometimes.

“I carried their stories with me, and I believe it shapes my work today. It is a reminder about the dignity of the person,” Wenzowski says. “It’s never been about choosing the easy path for me, but rather the one that is most interesting. The people I meet with, the communities I engage with, and the lessons I learn through helping, all make life interesting and more enriched.”