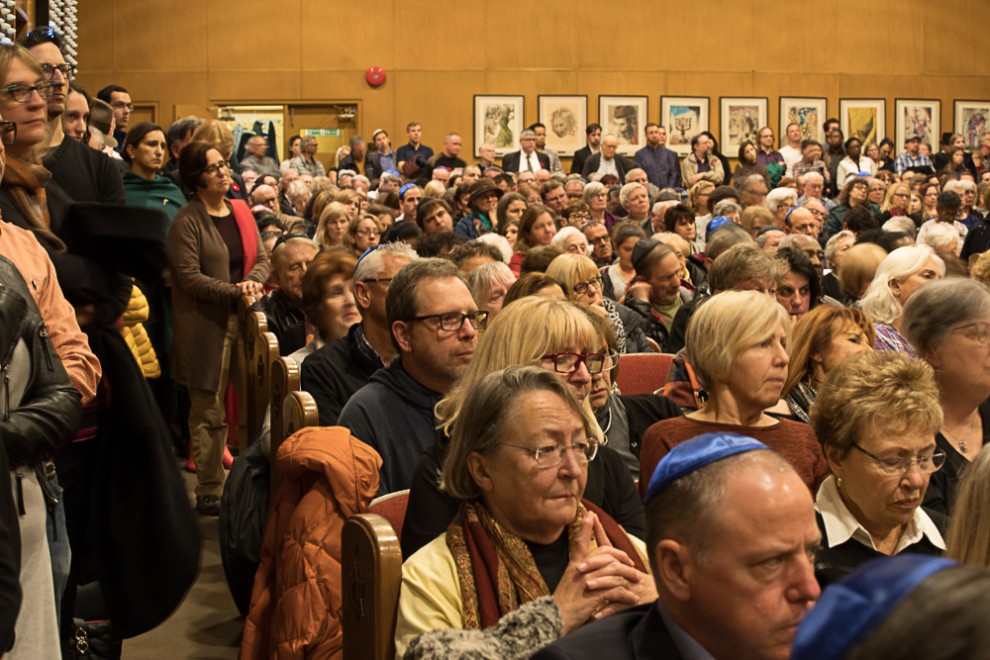 They came from all walks of life. Politicians, clergy, and ordinary citizens of all faiths joined their Jewish brothers and sisters in grief and solidarity at a multi-faith vigil held at Temple Anshe Sholom on Oct. 30. The event was held in response to the horrific attack that took place at Pittsburgh's Tree of Life Synagogue a few days earlier.  Several speakers addressed an overflow crowd of an estimated 600 people, on the themes of inclusion, support and defiance against the forces of hate and intolerance. The vigil, presented by the Hamilton Jewish Federation and the city's three main synagogues, was one of hundreds that took place throughout North America that week.

Among those bringing words of solidarity and comfort from Hamilton's multi-faith community were Imam Abdullah Hatia from the Halton Islamic Association, Rev. Linda Thomson from the Canadian Unitarian Council, Rev. David Cummings from the Hamilton Christian Fellowship, and Dr. Mani Subramanian from the Hamilton Hindu Samaj.  Mayor Fred Eisenberger spoke words of sympathy on behalf of the City of Hamilton.

Representing Hamilton's Jewish community were Rabbis Jordan Cohen, Hillel Lavery-Yisraeli and Aaron Selevan — Rabbi Daniel Green was on a plane home from Israel during the vigil — and Hamilton Jewish Federation president Jacki Levin. The program was punctuated with several emotional high points — Cantor Paula Baruch's and Rabbi Lavery-Yisraeli's singing of liturgical prayers and Leonard Cohen's "If It Be Your Will", with musical accompaniment by Jordan Abraham and signing by local teacher of the deaf, Dennis Nash, and second year McMaster student Daniella Mikanovsky's recitation of her poem, "Ner Tamid." An  active member of McMaster Hillel and frequent contributer to spoken word poetry events,  Mikanovsky  told the HJN that visualizing her own synagogue with all the power cut off but for the glow of the eternal light helped set the scene from which she developed her poem. "I was reminded of the attacks in Charleston and Quebec City," she wrote, "but I never understood the pain of those communities until today. That’s why I wanted to spread a message of unity in my poem."

Rabbi Lavery-Yisraeli's remarks, reprinted days later in the Hamilton Spectator, were especially compelling, drawing spontaneous applause when he said that fear of violence should not deter Jews from "increasing our efforts to do the right thing, because helping people escape oppression and danger is fundamental to our Torah," and moments later when he vowed that "We will continue attending synagogue and showing the hateful that we will not be discouraged, lose our dignity, or be terrified. Inspired and encouraged, we will go forth from our places of worship and continue mending the world."

Judy Rochwerg was among the hundreds of community members who attended the event. In an email to the HJN she wrote that she felt moved by the community's response to the violence in Pittsburgh.

"The environment was one of warmth, inclusivity and solidarity," she wrote. "I am proud of the work that the Hamilton Jewish Federation did to so quickly and effectively plan this vigil."

Dr. Daniel Kollek echoed her comments when he wrote, "It was comforting to see the diversity in the audience, reinforcing the fact that in the struggle against hatred there is more that unites us than divides us."