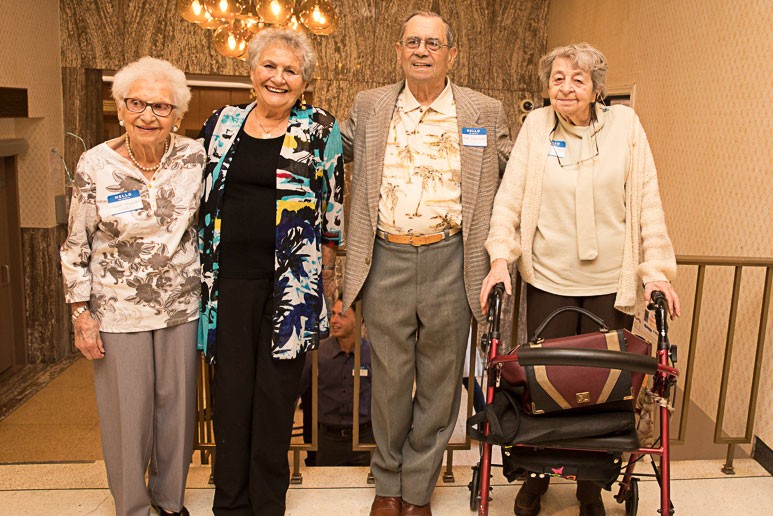 One family’s resilience was on full display in late September as the descendants of 39 Czech Jews who fled the horrors of the Holocaust met in Hamilton to celebrate the 80th anniversary of their arrival in Canada. More than 200 members of the Popper/Abeles/Ekstein/Brok family gathered at Temple Anshe Sholom for a grand celebration of the family’s escape and how they flourished in their adopted homeland. For Annette Richardson and Dave Loewith, who spearheaded the event, this reunion was the culmination of a year-and-a-half of planning.

From far and wide, old and young family members came to meet their relatives, many for the first time, and to share their memories of starting their new life and growing up in a land far from their ancestral home. Today, only four of the original 39 are still alive, and all were in attendance. The timing of the reunion was significant, “while we still have some of the original members of the group and survivors,” noted Loewith.

The eldest at 97, Wilma Abeles Iggers travelled from Buffalo, while the youngest, only 7 weeks old, were newborn twins Oliver and Jonah Loewith. Other relatives came from across Canada and from at least eight US states. Travelling the furthest, was cousin Wally Goliath, who made the journey from Brisbane, Australia. Meeting his family was especially poignant for Goliath, as it has only been within the past two-and-a-half years that he became aware of his North American relatives. “My great grandmother was a Popper and as far as my mother knew, no one had survived the war.”

The story of the family’s journey to Canada began with the 1938 Munich Agreement, when then British Prime Minister, Neville Chamberlain, along with the governments of France and Italy, ceded the German-speaking Sudetenland area of Czechoslovakia to Adolf Hitler, in return for the promise of “peace in our time.”

Recognizing the dangers to his family and to the Czech Jewish population in general, Karl Abeles, with the help of some of his business contacts in the Hamilton area, was able to secure 39 farming permits from the Canadian Pacific Railway. These invaluable permits allowed Europeans to immigrate to Canada on the condition that they farm the land for a minimum of five years. Eight decades later, significant portions of the family are still farming in the Mount Hope area.

The party kicked off with an opportunity to meet and talk with cousins from the various branches of the family. Many brought old photos and family heirlooms to display including a large family tree. After lunch with Loewith as emcee, several cousins spoke to the crowd about their fond recollections and the evolution of specific parts of the family.

Keynote speaker, cousin Craig Partridge, then regaled everyone with an even earlier history of the relations. Partridge, a professor and chair of the department of Computer Science at Colorado State University in Fort Collins, was one of the early developers of the technology that led to what we now know as the internet. Using his extraordinary researching skills, Partridge has traced the family back to a 1740 Bohemian family patriarch, Juda Lobl Popper and documented his subsequent descendant genealogy in a comprehensive book. For the reunion, Partridge extended his research back another 110 years to 1630. Expanding on the lives of Juda Lobl, as well as two of other prominent ancestors, Isaac Abeles and Aron Brok, Partridge placed the history of this family into context of the Thirty Years War.

“I think it is interesting to hear what your family was like back 350 years ago,” he said. “These are people that almost everybody in the room is descended from. So, it is a little bit of everybody’s history.”

Loewith muses on the success of the family since coming to North America.

“By and large, the immigrants and their descendants have done very well in all levels of academia and business. They have had major impact in all endeavors,” he said, noting  that family members have contributed and been recognized around the world.  Among them and aside from Partridge, Wilma Iggers and her late husband Georg were world-class historiographers, pioneering the study of historical writing. Rick Ekstein has a world-renowned company in terms of lumber exports. Karl Abeles and Paul Ekstein have been inducted into the Ontario Agricultural Hall of Fame and Canadian Agricultural Hall of Fame respectively and both are recognized for their contributions to the industry.