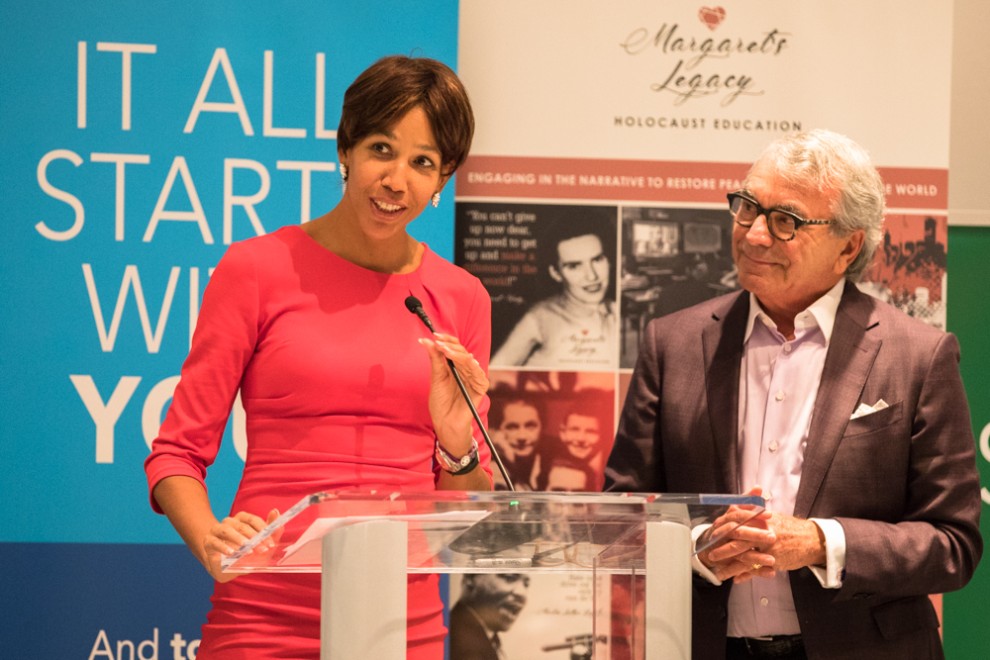 In all of that Teege sees the roots of another terrible time in history, a time when her grandfather oversaw thousands of concentration camp murders and, for sport driven by fanatical hatred, would shoot prisoners from the balcony of his villa or unleash his specially trained guard dogs to tear out their throats.

That grandfather was the Nazi war criminal Amon Goeth, commandant of the Plaszow concentration camp in Poland. Teege told an audience at the community commemoration of International Holocaust Remembrance Day they only need cross the border into the United States to see the seeds of another Shoah taking root.

“I think we are living in very dangerous times, not only in the United States where it’s very clear what direction they are heading, but also in Europe and other parts of the world,” she said.

“I see that there are threats and I think it is important to speak out loud and warn people and teach them what I have to teach from my point of view,” she added. “Most important for me is the importance of empathy, all these things that were missing in historic times in Germany.”

Teege’s view of the world was borne of her own search to understand her Nazi past. She discovered her personal connection to that history entirely by accident after randomly picking a book off the shelf of Hamburg’s public library.

“There was a tiny little picture of my mother on the cover but I did not recognize her immediately,” Teege said. “If I hadn’t been in the library that day or the book was not on the shelf I probably would not know. Really I just found out by finding the book.”

(Teege’s grandmother had an affair with Goeth while he was in command at Plaszow. Her mother later became pregnant by a black Nigerian man. Teege was raised in orphanages and although she had periodic contact with her mother and grandmother she was never told anything of her lineage.)

Discovering she is a direct descendant of one of the most evil men in history sent Teege into depression, therapy and, eventually, to writing her bestselling book "My Grandfather Would Have Shot Me: A Black Woman Discovers Her Family's Nazi Past."

“In the beginning it was something I kept secret because I was so overwhelmed by  it. I needed some time to come to terms with what I found out,” she said. “At first I thought it was like I had lived a double life, like I had been living a lie. It has a lot to do with your identity and who you think you are because suddenly everything collapses.”

That process of discovery, Teege said, left her with the feeling she could not hide the truth of her past but had to share the story as a way of remembering what can become of a world where hate is seen as legitimate. It is especially important as the world’s direct connection to the Holocaust fades— a stone monument is all that remains of the Plaszow camp today and the ranks of Holocaust survivors thin with every passing year.

“This is a story I am not allowed to take to my grave. It has to be told,” she said. “The world is going in a direction that is very scary.  It’s a global development where things you were not allowed to say just a couple of years ago are now completely legitimate again in the eyes of some.