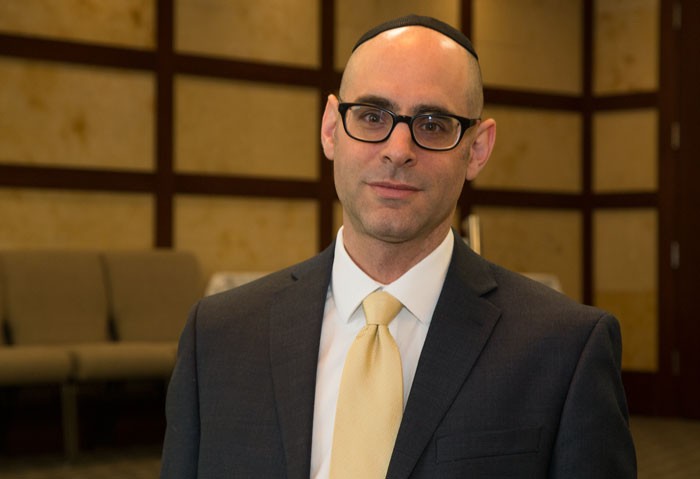 After nine years as spiritual leader of Beth Jacob Synagogue, Rabbi Dan Selsberg, his wife Karen and their three young sons will move back to the United States this summer. Below, the rabbi reflects on his tenure here, and offers insights into the Hamilton Jewish community and how it can meet the challenges ahead.

How did starting off your rabbinical career here in Hamilton shape the professional you’ve become?
Hamilton, on a personal level, was a soft landing. From the moment we arrived, the folks in the synagogue had cleaned up the house, cleaned up the yard and planted flowers. It set a tone, we are here, we want you to do well. We want you to succeed. We want you to be comfortable. We want you to be happy. That has never left. Professionally, similarly, Hamilton has allowed me space to grow. People have been incredibly supportive. People ask how long a rabbi’s honeymoon lasts and I really have no answer to that because people were patient with me in the beginning and seem to continue to be so. And for me it’s been pretty impressive that folks have acted like this. It’s allowed me space to be who I am.

To someone unfamiliar with Hamilton, how would you describe this city’s Jewish community?
It’s small, and in many ways, tight knit. I’d say that Hamilton punches above its weight in having three active synagogues, a mikvah, butcher, JCC, day schools, and all the things that are going on here. But there are two main things that go on. There’s a cadre of folks where everybody knows everybody, and at the same time, there’s more here than just that cadre, and part of the challenge is trying to expand that circle — making sure that there’s a continual bringing people in. So if I was describing it to a colleague I would say that we have a good core but a hard time imagining how we should look tomorrow that’s different from yesterday.

Is Hamilton a good place to raise a Jewish child?
Yes, but there are pluses and minuses to it. We live in the shadow of Toronto here. In a city like Toronto, there are more Jewish resources available without a doubt. In many ways, though, it’s less affordable, so it’s out of reach for a greater number of people. Here, both the housing and Jewish education are more affordable so they’re more in reach for a greater number of people if they choose to avail themselves of it. So in that way it’s a good place to raise a Jewish child. I’m not convinced that we have the critical mass of educated Jews who are engaging in instruction for kids to really fulfill the promise of the relative availability of  Jewish education here. I can envision a higher quality of teachers and educators. The people who are doing it are generally good at it, but we need more of them. I think that it would be a better place to raise a Jewish child if we make sure that our resources were used in a more forward thinking way. If one were to drop in from Mars or even from Toronto and look at how we’re educating our kids and how we’re allocating our resources to this institution or to that one, and how those institutions are set up, it clearly wouldn’t be ideal. I think there are better ways to do it, but there are political and religious turfs that end up trumping a better way that would see more kids getting a deeper and more complete Jewish education.

What was your vision for Beth Jacob and was it fulfilled?
Regarding our role in the community, I have always wanted Beth Jacob to be a place that anyone who could conceivably join a Conservative synagogue would think this is a good place to be, because I’m not convinced that 10 years ago it was. And now it is. So I think we do do a good job of delivering on that, in that we seek to conserve the preponderance of the Jewish tradition, without compromising our ethical values; which is to say that if you hold something as an ethical value, you don’t have to check that at the synagogue door and say that, well I believe this out in the world, but Judaism is different. We also offer equal opportunity to men and women. I think that is hugely important and something that the congregation is properly proud of.

Can Conservative Judaism meet the needs of today’s young families?
I would say that the future also should involve making sure that we remain accessible to the Jews in front of us, however their families are constituted. To let folks know that there’s a place that is delivering the wisdom of the ages in a way that is applicable to the differing and constantly changing situations of today and making sure that we’re doing that in the idiom they understand. There are some things that the shul will always do — prayer services in Hebrew, for one, but  there needs to be an effort to make sure that what’s being taught is in step with people’s lives and something that can enrich people’s lives. That means having the conversations, teaching sessions and programs where people will be able to connect with each other, with themselves, with their families, with their past, with their future, with God and with the Jewish people everywhere.

What are you most proud of having accomplished during your time here?
When it came time to renovate this place, we stepped up and now that I see other places that have struggled with that, I’m amazed that it happened here. I’ve seen synagogues where they renovated and spent the next decades in debt because they overspent by millions. And we didn’t. We scaled back actually, to make sure we weren’t mortgaging the future of this congregation. But, we also didn’t sit on our tuchases and say, “well it’s a risk, so why bother doing it?” Part of it was working together and making sure we maintained the Jewish vision that you are never satisfied with the way things are, but you think about what could be. The Torah is the story of a journey to the promised land, and it ends before you get there. It’s about being on that journey to a better place and at the same time not thinking that everything will turn out okay. Not having the sense that, no matter what we’ll be fine. But taking care and making prudent and reasonable decisions. I think that’s my nature and it turns out it was this community’s nature and I think that it served me well to be here where people were willing to work in partnership. We built on what was and if I had asked somebody the day I arrived, what will Beth Jacob be in nine, 10 years, they would not have described the building I’m sitting in right now. How it looks. How it feels. Who’s in it. And I’d like to think that I did that here. I definitely did not do it alone. It only works because there were a number of really dedicated, intelligent and good-hearted people who bought into the same vision and wanted to build the same thing and that’s what Jewish communities are for.

What insights can you share with us about the Jewish community you’ve come to know so well.
This community has been good at making sure that it has the bricks and mortar to serve the needs of community. While having building space is nice, making sure that there are people who are inspired to be in that space is even more important. I think in the future, the Hamilton Jewish community has to make sure that it’s ready for changing Jewish demographics. It’s going to be important to ensure that the needs of interfaith families are being met and that they’re helped to make choices that will serve them well and serve the Jewish community well. It will be important to create educational programs that will maximize the depth for the amount of time that families will commit to Jewish education. Just like all the separate wicks of a havdalah candle blend together to create a flame that’s taller than any one candle can do on its own, the same is really true for the community.

What will you miss most about Hamilton?
The people. There’s a privilege in this job, in that many people invite me into their lives, and I’m there with them at difficult times and happy times. And they’ll say things to me that they wouldn’t say, maybe, if I didn’t have the title before my name. It creates a relationship and a bond. When I arrived here nine years ago, I looked out at the sanctuary on the High Holidays, and there were hundreds of people — a crowd shot. Now when I do that, it’s individual people out there, and I know the story of pretty much everyone in the room. And I know which seats are empty. Because somebody didn’t make it this year and I know which seats are occupied because somebody’s been added and, as the prayer says, I know who’s lived and how they’ve lived, who’s waxed rich, who’s been brought low, who’s been raised up, and it makes a difference. That’s what I’ll miss. The  individual people, that’s what’s really joyful. It says in the Torah, b’tselem elohim, that we’re all created in the image of God — that little spark of uniqueness and divinity, I’ve really seen that in this place. That’s what I’ll miss the most.