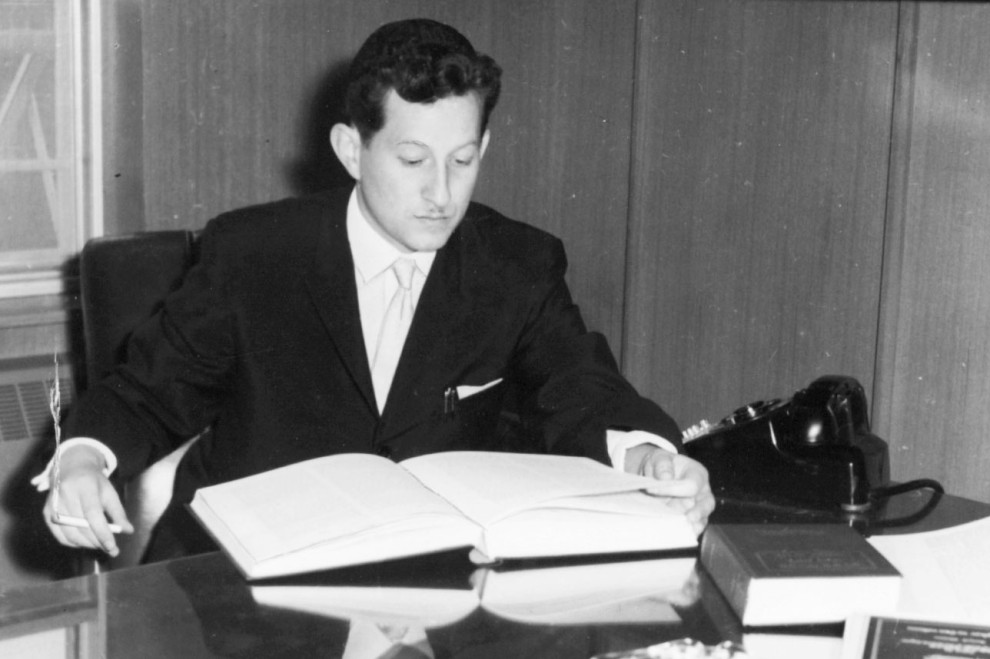 Rabbi Mordechai Green, who died in July at age 84, was an icon in his community, a larger-than-life figure who inspired countless individuals as well as the congregants at the Adas Israel Synagogue.  He was the epitome of leadership and dedication.

Rabbi Green, rabbi of Hamilton’s Adas Israel Congregation for 44 years and rabbi emeritus for the following 16 years, had a vision for his community and through unwavering determination he saw it through to fruition.

In 1958, when Rabbi Green assumed the role of spiritual leader of the synagogue, at the time a small shul on Cannon Street in downtown Hamilton, he saw its potential for growth and vibrancy.  He spearheaded a campaign to ensure the financial backing for construction of a new building on Cline Ave. S., but that was just the beginning of Rabbi Green’s vision.  He saw the synagogue as a welcoming house of worship attracting an increasing number of families from diverse Jewish backgrounds.  He succeeded in doing so through his foresight, perseverance and charisma.

Rabbi Green was intent that Jewish children in the Hamilton area have the opportunity to be educated at a day school encompassing Jewish traditions and values as well as providing secular studies.  In that vein, he created the Hamilton Hebrew Academy, which to this day welcomes every Jewish child regardless of affiliation or ability to pay.

In the 1960s, Rabbi Green established a Jewish youth movement that attracted teenagers from Ontario, upstate New York and the upper Midwest.   The winter and summer seminars attracted up to 500 teenagers.  Ultimately, the movement became NCSY Canada.

Rabbi Green was also instrumental in the construction of the mikvah in Hamilton, and it was through his vision that a yeshiva was established, with an enrolment that grew to over 100 students.

When the influx of Soviet Jewry to Hamilton began in the late 1970s, Rabbi Green played a major role securing housing, basic living necessities, and free Jewish education for the children.  As the new immigrants had no financial history in Canada, or security, Rabbi Green personally co-signed for most of the leases even though he was not in the financial position to do so.   In 1979, a mass wedding was performed in the Adas Israel sanctuary, followed by a community celebration for scores of Russian Jewish couples who were denied a Jewish marriage in their former homeland.

In a 2002 interview Rabbi Green said: “What I’ve tried to maintain, in the shul and through education, is the continuity of Jewish tradition.  We have to develop a personality that can go out into the world and still maintain his or her personal identity.  That requires knowledge, commitment and spirituality.  A strong sense of Jewish identity will help guard against the risk of intermarriage and assimilation.”

In a video shown at his shloshim memorial last August, Rabbi Green said that his destiny was to be in Hamilton.

“It is very rare that a rabbi was encouraged to the extent that I was …  It was a relationship (to my congregation) that made my life meaningful and purposeful.

“What I hope and pray is that the priorities in our community will be deeply rooted in Jewish education, in Torah education.

Rabbi Green’s son, Rabbi Daniel Green, the synagogue’s current rabbi, says his father was the champion of the individual.  In a Facebook post, Rabbi Daniel Green added: “He was selflessly there for people in their most trying moments, restored relationships and hope, and made countless individuals believe in themselves. He was a mentor to many in all aspects of life.  His dedication to others knew no bounds.”

Rabbi Green was a staunch Zionist and defender of Israel.  He served as Chairman of the Federation emergency campaigns for Israel. He helped raise significant funds for various Israeli charities including United Israel Appeal, State of Israel Bonds, Emunah Women, Beit Halochem, and Sha’arei Zedek Hospital. During his tenure as rabbi, countless members of the Hamilton Jewish community made aliya to Israel with many attributing their decision to Rabbi Green’s encouragement and inspiration.

In 1973, Rabbi Green, together with a group of idealistic Canadians, spearheaded a major effort to establish a community in Israel called Kiryat Canada.  The group purchased 400 dunams of land on the Mediterranean coast, in an area now called Ramat Poleg.  The project ultimately stalled, due to internal Israeli politics, but the efforts inspired Rabbi Shlomo Riskin to establish a community in Israel called Efrat.  It was in that City that Rabbi Green resided during his final days and where he ultimately passed away on July 17, 2018.