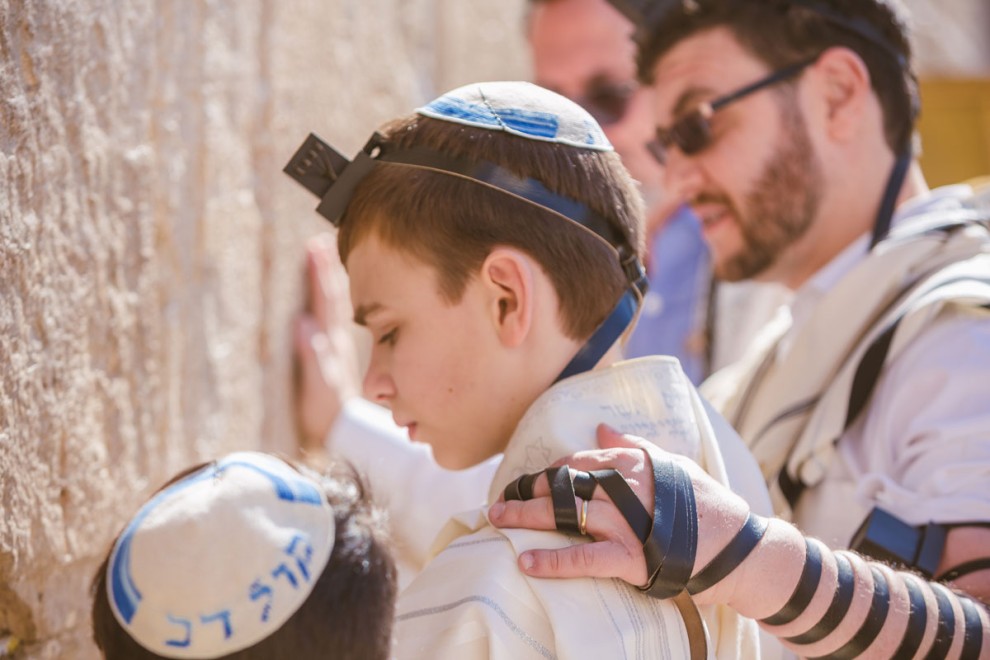 When we left for Israel to mark my son’s bar mitzvah, I kind of expected that God would be waiting there for us at the Western Wall.

Never mind that you probably won’t see me much at shul. I am likely to arrive late or leave early.  I know that one of my children will come and fetch me anyway during davening.  So I don’t push myself to arrive early, to focus, to daven.  I sit in the back row, on the edge of the bench, ready to make a quick exit.

In spite of all of this, I expected that God at the Wall would be a given.  Jews and non-Jews from all corners of the world trek to the Wall.  We fight over how much access we have to it, how easy it is to reach, who can pray and when.  We wedge notes into its crevices, a testament to our belief that God is there.

I had wanted to bring my grandmother’s siddur to the Wall.  The one she was married with.  But we packed light and I didn’t want to lose it, so it remained by my bedside table.  I wanted to focus on my son as he read his Torah portion, but my girls were tired and crabby and wanted to be held, so my attention was divided.  I wanted at least to touch the Wall when we arrived, but I had to elbow my way through the throngs of women who had taken a front row seat, and remained there, huddled protectively around their prayer books.  But this was not about me; it was about my son, and he was so happy.  Relieved to have layned (read Torah) well, ecstatic to place the Torah back in its holy place at the Wall.  I didn’t ask him if this was a spiritually meaningful moment.  I certainly didn’t ask him if he spoke with God, but I know that it was and that he did.  Looking over our photos from that day, I can see it from all images of him in quiet reflection, from the way in which he leans against the wall, the box of tefillin on his forehead resting against the warm stones of the Wall.

I didn’t have such a moment but was able to revel in his.

We moved on to our travels and sightseeing and I forgot about the Wall.  From Tel Aviv, to Akko, to the West Bank, we explored and experienced Israel.  We went to see the Qumran caves, where the Dead Sea scrolls were discovered in 1947.  We joined the tours to view the mikvahs and milk bowls of the people who lived there 2,000 ago.  What no one mentioned though, and what did not join the Dead Sea scroll touring exhibition, is the pile of tefillin discovered in the same area.  Yet, for some reason, these ancient dusty boxes gave me pause.

Those pieces of leather look exactly like the ones worn by my husband, and now my son, as they pray each morning.  My son’s tefillin took months to locate, as we travelled from Montreal to Toronto, to Israel, searching for tefillin of the right quality, the correct size, the correct minhag (custom).  These same tefillin crowd my kitchen island each morning and test my patience as they must be cleared and put away before breakfast can be served.  And there, almost 10,000 kilometres away, the same black straps lay coiled in the soil, rolled parchment tucked neatly inside their boxes.  Incredibly, the tefillin at the Qumran caves signify the continuity of Jewish customs spanning two millennia.  They stand as testament to the incredible tenacity of Jewish practice and are a tangible link of the Jewish people, through time, to God and to one another.

And so, here was my greatest, humbling insight.  There, in the caves, God reminded me that His presence is not a “Big Reveal”.  God is not waiting only at the Wall or in the pages of my grandmother’s siddur.  Rather, the divine presence is in the mundane details of everyday life.  God is with me when I find gratitude in my crowded kitchen, when I relish that the tefillin cluttering my counter are not just holy objects, but constant reminders of who we are and of those who came before us.

Alice Mendelson is a mother of four and former teacher and day school principal turned college professor.  Originally from Montreal, she and her family have lived in Toronto and Zurich, Switzerland, and are now happy to call Hamilton home.