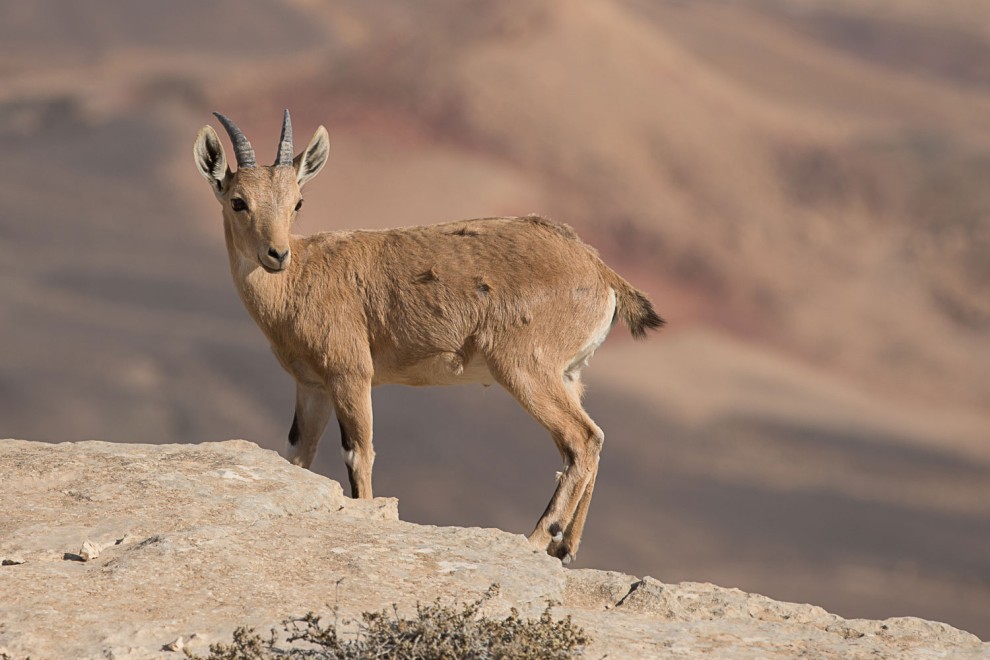 Standing on a precipice overlooking one of the most beautiful views my eyes have ever beheld, I wonder that for all my frequent trips to Israel over the years, this is my first encounter with the majestic Makhtesh Ramon. The Ramon Crater, as it’s more commonly known, is actually not an impact crater, but rather a 40 kilometre-long, nine-kilometre-wide and 400-metre-deep geological landform created by millions of years of erosion as the Negev made the transition from ocean to desert.

As an overseas student living in Israel in the 1970s, I was vaguely aware of the existence of this unique geological phenomenon next to the town of Mitzpe Ramon, but in those euphoric years following the Six Day War, I, like thousands of other visitors and native Israelis, was much more focused on driving through the Negev as quickly as possible in order to get to the Sinai desert and its magnificent beaches. When Israel returned the Sinai peninsula to Egypt in 1982, the Negev received renewed interest, and in 2011 with the construction of a luxury hotel on a cliff overlooking the Makhtesh, Mitzpe Ramon suddenly became one of Israel’s top vacation destinations.

That is how my family came to the decision to splurge on a three-night stay at the Beresheet Hotel this month, in honour of our Israeli aunt’s 90th birthday.

It was a decision we would not regret. From the moment we entered the hotel lobby where huge picture windows show the Makhtesh in all its glory, we were immediately transported to another world.  Dozens of wild Nubian ibex roaming freely on the property only added to the enchantment, as did watching the setting sun transform the desert landscape into a palette of constantly changing hues—all from a front row seat at the hotel’s exquisite infinity pool.

When the Beresheet Hotel opened, many were hopeful that it would spur the creation of new businesses in Mitzpe Ramon and have a positive impact on the local economy. But a 2016 article in Ha’aretz noted that the majority of guests, wanting to get the most of their time there, don’t venture much out of the hotel. If so, they’re losing out.

A 15-minute drive from the hotel,  you will find the Alpaca Farm Mitzpe Ramon, a charming working farm that doubles as a bed and breakfast. Its resident herd of South American llamas, alpacas, horses, and angora sheep have made it especially popular with families of young children.  For me, the draw was a sunset horseback ride to the machtesh rim. My guide was Maya, a lovely young Israeli woman who has been living at the farm for the last seven months, on a gap year between completing her army service and post-army travels and starting university.  We rode along rocky terrain, reveling in the freedom that comes from being in an isolated space, the barren but beautiful landscape stretching for miles in every direction. After 45 minutes, we arrived at the rim just in time to witness a breathtaking sunset.

The following day, our last, the seven of us headed into the machtesh itself on a sunset jeep tour with Beresheet Desert Tours. The company’s charming owner Gilad Cartoon moved to the area six years ago, swapping his desk job in Haifa with a lifestyle that suits his adventurous spirit. Our two-hour tour took us off-road on a bumpy but comfortable ride that included frequent stops during which Cartoon pointed out the area’s unique geological features or demonstrated the secret medicinal qualities of various desert plants. After holding our breath while Cartoon navigated some very challenging vertical terrain, we were rewarded with 360-degree panoramic views of the Makhtesh from the top of Mt. Gevanim.  It was the best possible conclusion to an amazing three days.

Forty-eight hours later, we were back in Canada, tired but elated from our whirlwind trip to the Negev desert.  Mitzpe Ramon feels like something very rare today: an unspoiled and accessible piece of paradise. Put it on your list for your next Israel vacation. You’ll be glad you did.

IF YOU GO
What: The Makhtesh Ramon is the world’s largest erosion crater located about a two-hour drive south from Tel Aviv.
How to see it: The Alpaca Farm Mitzpe Ramon (www.alpacas-farm.com)  is a great starting point for horseback rides to see extraordinary scenery and observation points. Beresheet Desert Tours (www.bedesert.co.il) offers Jeep tours inside the makhtesh, Bedouin experiences and stargazing.
Where to stay: Beresheet (isrotelexclusivecollection.com/beresheet/), an architectural wonder that overlooks the Makhtesh. For the more budget conscious, a Google search will list several other lodging options.