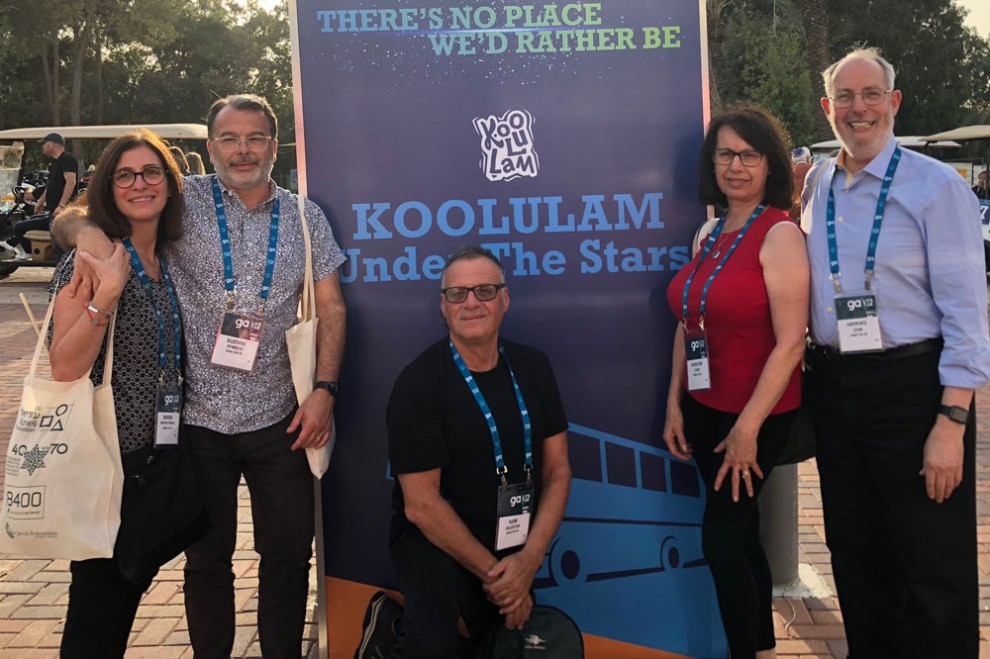 The gulf between North American Jewry and Israel is wide and growing wider. It seemed wise then, that last October's annual General Assembly of the Jewish Federations of North America (GA), was dedicated to the theme of "Let's Talk." Hamilton representatives — Hamilton Jewish Federation CEO Gustavo Rymberg and his wife Marisa, JNF Hamilton president, Chaim Goldstein, my husband Larry Levin and myself — were among the 90 Canadian Jews out of a total of 3,500 North American Jews in attendance at the GA. I found it fascinating, informative, often emotional and often overwhelming.

Why do we need to talk? Look at these results of JFNA research into the views of Israeli and North American Diaspora Jews:

Many, especially the younger generation, who often express their Jewishness through social justice projects, are upset with the recently passed Nation State Law. Conversions and weddings performed by non-Orthodox rabbis are not recognized in Israel and last year, Israeli police detained a Conservative rabbi for performing a non-orthodox wedding. With 85 per cent of North American Jewry  identifying  as non-orthodox, it's no wonder that a great many feel unaccepted in Israel.

The Assembly began with an address by Israeli president Reuven "Ruvi" Rivlin and closed with a talk by Prime Minister Benjamin Netanyahu.

Attendees were treated to a wonderful reception at the Knesset, where we were addressed by Speaker of the Knesset, Yuli Edelstein, a supporter of non-Orthodox prayer at the Western Wall, and listened to a panel of Knesset members, among them, former foreign minister, Tzipi Livni, who committed to raising the issue of the Nation State law again in the Knesset.

Many of the speakers offered interesting and innovative suggestions regarding the need for dialogue. President Rivlin suggested a reverse Birthright trip for Israeli Jews to learn about the diaspora much as millions of diaspora Jews have visited Israel on Birthright trips. McGill University Professor Gil Troy and former Jewish Agency head Natan Sharansky put forward a recommendation that a Jewish People’s Council be formed, which would include representation from the broad Diaspora community and help bridge controversial issues.

The three day conference was filled with exciting, interesting and fun-filled experiences. Highlights included an emotional presentation by Thailand’s ambassador to Israel, Penprapa Vongkovit, who thanked Uzi Hanuni of Maxtech Networks for using his company's communication technology to help in the rescue of a youth soccer team stranded in a cave earlier this year;  We heard from Israeli Flying Aid, whose more than 1,000 volunteers provide mass feeding centres, medical aid, and train medical personnel in many countries, and make prosthetic hands and even work in Syria to help sworn enemies; We heard from Miriam Peretz, whose two sons were killed in the army. She dedicates her life to educating soldiers and students and lectures on Zionism around the world; We heard from Arab-Israeli entrepreneur, Imad Telhami, who is working to empower and advance the Arab community in Israel and especially Arab women.

We participated in a mass singing event arranged by Koolulam, a joint event with Masa Israel Journey, whose participants spend a year in Israel volunteering or interning. The Koolulam experience brought more than 3,000 of us together in Tel Aviv’s Hayarkon Park, to learn a song that would then be recorded. It was exciting to be a part of it.
Aside from the presentations in the plenary sessions, there were many small breakout sessions covering topics such as religious pluralism in Israel, the security of the Jewish state in a tempestuous region, Israeli medical breakthroughs, and Israel’s societal challenges, including integration of the haredi and Arab communities. In the breakout sessions I attended, the pervasive feeling was that change in Israel has to come from the grassroots as no one can see change coming anytime soon through the political system. In order for this to happen more  Reform and Conservative congregations must be established, in order for there to be  a groundswell of demand for pluralism. This is happening but will take time.

There was one glaring omission from the GA: a discussion of the Palestinian problem and the settlements of the West Bank and Gaza. The only speaker who raised the issue was Ambassador  Lyons whose speech was well received by the assembly. This is an issue which is very important to many North Americans and it was not discussed.

Finally, it was Prime Minister Netanyahu's turn to speak to the diaspora Jewish leaders in the audience. He began by expressing concern at the loss of Jewish identity among diaspora Jews, while promoting education, study of Hebrew and trips to Israels targeting young Jews as ways to protect Jewish identity and the continuity of Jewish communities. Netanyahu was challenged on his failure to embrace religious pluralism. He answered that Western Wall politics and conversion issues will be overcome in time but the loss of Jewish identity in the Diaspora was the critical problem.

“It’s protecting Jewish identity and developing Jewish consciousness that is the most important thing. It transcends politics; it touches on the foundations of history,” he said, imploring, “We’re one people. Let’s make sure that every Jewish child in the world knows how proud they should be to be Jews.”

To hear some of the speakers at the General Assembly, visit jewishfederations.org/events/general-assembly-2018.
More importantly, whenever you have the chance, go to a GA. You will find it stimulating and thought-provoking, and connect with the Jewish world in a way that you can’t by sitting at home.