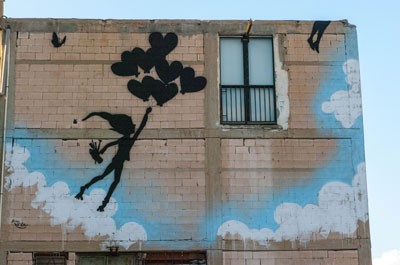 The tour commences with an introduction to Kislev, the most highly acclaimed graffiti artist in Tel Aviv, also known as the “Israeli Banksy” (Banksy is a world famous graffiti artist who focuses on political/social issues). The painting above depicts an elf (Kislev) with spray can in hand, floating towards another elf (Banksy) while being carried via balloons of love. The works of Kislev are easily identified by his signature logo of an elf.

An interesting phenomenon in the graffiti community is prominent artists working together. An example of this is BabyK who is French, but his works are frequently found across Florentine (above, left). Tel Aviv is an attractive destination for groups of graffiti artists because there are no strict graffiti laws. Small fines are issued when caught and sometimes police officers will not even punish the artists. As a result, other than New York City, Berlin, and London, Tel Aviv has become one of the most pursued canvases for graffiti in the world.

There is an artist that goes by the name of Dede who did a collaborative piece with his friend Wonky. Wonky is known for his depictions of strange looking monkeys and Dede is known for using Band-Aids; these Band-Aids are a metaphor for not being able to completely fix emotional scars. Dede’s service in the combat unit of the Israeli army, where he had to deal with difficult situations, lead to this recurring theme in his artwork.

A unique graffiti style is that of Vered Dror, who uses braille. This type of artwork originated from when Vered was in Zagreb, Croatia for a graffiti competition. After days of planning her masterpiece for the competition, she noticed public places vandalized with swastikas painted on them. Dror asked several locals why nobody was cleaning these horrific symbols up and everyone answered by simply saying “I didn’t notice.” Outraged, she abandoned her previous plan for the graffiti competition and placed all around the city a single statement in braille: “I didn’t notice, I didn’t see a thing.” Vered went on to unanimously win the competition.

Due to the large gay community in Tel Aviv, graffiti expressing gay pride is not an unusual sight. One of the wittier pieces is an image depicting Bert and Ernie from Sesame Street embracing each other saying “Hi kids, we are getting married!”

As we approach the conclusion of the graffiti tour there is a focus on political art. Among these is an image depicting the assassination of Prime Minister Yizhak Rabin, showing the crosshairs of the sniper on his head (lower right, above) The painting was created in Rabin’s honour. In the insert above, you can find a slogan relating to conflict between Jews and Arabs. When first sprayed, the slogan translated to “Jews and Arabs refuse to be enemies.” However, someone vandalized it to say “Jews and Arabs are enemies.” Later, one of my Jewish history teachers, Evan, changed it again to say “Jews and Arabs are not enemies.” Good job Evan!

Tel Aviv is a beautiful city and I thank you for joining us on our graffiti tour!

Nathan Apel, 16, has recently returned from a four month semester program at the NFTY-EIE High School in Israel.