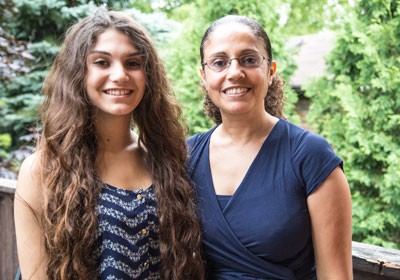 As the costs associated with a day school Jewish education continue to soar, Israel-based programs are presenting parents with another option. For the independent-minded, academically motivated student, the Naale Elite Academy enables young Jews from the Diaspora to complete their last three years of high school (in some cases, four) at an exclusive, top quality Israeli high school while learning to be independent, self-sufficient and resilient. All of its costs, including tuition, room and board, living expenses and even airfare, are covered  by Israel’s Ministry of Education and  the Jewish Agency. The Naale program dates back to the early 1990s as a way to ease the aliyah experience of teenage immigrants from the Former Soviet Union. In 2000, the school opened its doors to students from Argentina, and attracts students from the United States, Europe, the FSU, South America, Germany, Poland and South Africa—and Canada.

Dundas resident Tiki Levgoren is Naale’s Canadian representative. The 32 Canadian students currently enrolled in the program represent 70 per cent of those who applied. All applicants to the program are required to go through a comprehensive screening process to evaluate their academic ability, maturity, independence levels and psychological aptitude. Once accepted, Canadian students have the option of choosing one of six Naale residential high schools located across the country, which range from secular to Orthodox. For students interested in pursuing an advanced degree in engineering and technology, there’s the additional option of applying to the Anieres Elite Academy, an affiliate program with the Technion. Only 30 international and 30 Israeli students are accepted on an annual basis. Among the most recent successful applicants was one Canadian.

First year Naale students are taught in English, with an additional 20 hours a week of intense Hebrew language classes. By Grade 11, all courses are taught in Hebrew.

Roni Levgoren, 16, is currently in her second year at Naale. Despite her daughter being raised in Israel, Levgoren said that it wasn’t a given that her daughter would choose Naale over her Dundas high school. “She wanted to be in Israel. She missed the atmosphere.”

“I loved Highland,” said Roni. “but then I realized this is a once in a lifetime opportunity ...  I get to be with Israelis and with people from all around the world.”  Roni loves that the program is offered in actual Israeli high schools, so that Naale students have the opportunity to socialize with their Israeli peers outside of class. And while she prefers the Canadian semester system, Roni appreciates that her teachers “really know you and they’re there to help you.”

With all the freedom that comes with living among one’s peers, free from parental supervision, one might expect a high failure rate. But the opposite is true. Levgoren reports a matriculation rate that is significantly higher than the Israeli average. Chalk it up to another Naale perk: Tutors on any given subject, as needed. About mid-way through Grade 10, Roni said, students realize it’s time to buckle down and get serious.

“If you want to stay in this program you have to show them you care.”

Those who are interested in learning more about Naale Elite Academy are asked to contact Tiki Levgoren at naale.canada@gmail.com or call 416-822-6190. Additional information about the program can be found at www.elite-academy.org.