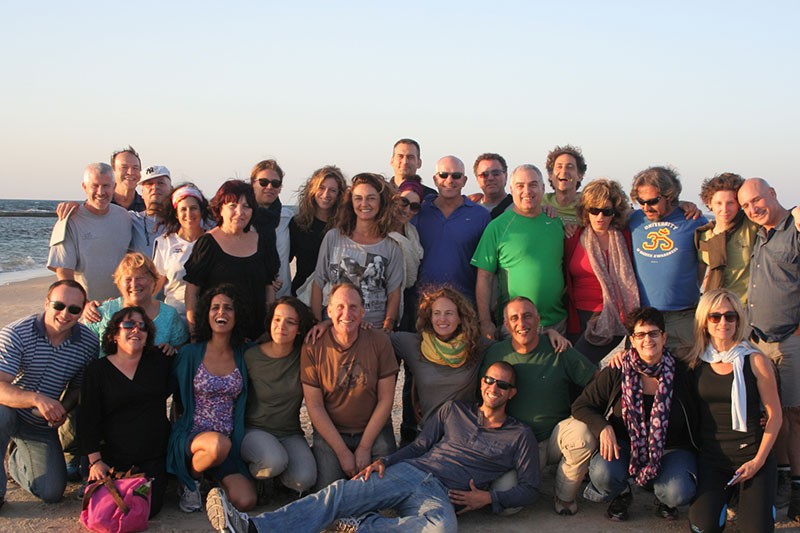 
It sounds like a cliché. Twenty-five people spend six days together at a retreat and emerge feeling that their lives have been profoundly changed. But every aspect of this particular gathering - who organized it, how it came to be located, against all odds, in Israel, its unique mix of Israeli, Turkish and a handful of other international participants and the implications it may have for peace between Israel and her neighbours  — made it quite extraordinary. The following story, as uniquely Israeli as it is universal, testifies to the infinite possibilities that can unfold from authentic human interactions and inspirational leadership.

Israeli chutzpah, tenacity and charm appeared, at first, not to be working. For the better part of five years, Dori Ben Chanoch, Abi Shilon and Ran Menashe had been trying to persuade their mentor, Karen Kimsey-House, co-founder and CEO of a global coaching organization called CTI, to bring its leadership program to Israel. CTI,  “the oldest and largest in-person coach training school and one of the most innovative leadership training organizations in the world,” according to its website, is based on a philosophy and vision that calls for global  transformational change. While CTI’s coach-training workshops are widely regarded as an effective vehicle through which individuals and organizations can be encouraged to grow and change,  it’s the organization’s Co-Active Leadership Program, an experiential year-long training over four residential retreats, that proponents recommend as having the greatest potential to evoke radical transformation in individuals, and by extension, in the societies they inhabit.


Of the three Israelis CTI-trained coaches, only Ben Chanoch and Shilon were graduates of its leadership program. Menashe  had noticed how his colleagues benefitted from the program and  badly wanted it for himself, but with Leadership (as it’s known in CTI circles) being offered only in the United States, Spain and Japan, the cost of airfare on top of tuition was prohibitive. That, in Menashe’s mind, left only one solution. Leadership simply had to come to Israel.
Kimsey-House, at first, had a number of concerns.  It was no small thing to bring Leadership, a logistically-heavy program that requires both a retreat centre that can accommodate up to 22 participants, two assistants and two-co-leaders, as well as a separate ropes course facility, to yet another foreign country. She was also not sure that an Israel-based program would be able to attract Muslim participants, something she felt strongly needed to happen. While the Israelis worked hard at addressing each of her concerns, it wasn’t until Ben Chanoch was selected among a new cohort of Leadership leaders, that finally persuaded her to take a leap of faith. She and Ben Chanoch would co-lead a Leadership retreat. There was, however, a caveat.


“I was very clear in my conversation with Dori, Abi and Ran that we were doing a retreat stand alone only and that (participants interested in continuing the program) could join other leadership programs ... I said it around 10 times,” recalled Kimsey-House.  Knowing them as she did, however, she anticipated that there would be pressure to continue the program in Israel. She remembers asking her husband and CTI co-founder, Henry Kimsey-House,  “Who do you think would be a good co-leader for Dori because I’m certainly not going to be taking three more trips to Israel. It’s not the best use of me.”   On October 2013, the first-ever Israel-based Co-Active Leadership Program was launched at Beit Daniel, a retreat centre located in central Israel.  It was the largest leadership tribe in CTI history. Asked about the interactions between the Israelis and Turks, Kimsey-House affectionately described the retreat’s tentative beginnings.
“For the first day or two I sensed an odd formality and trying hard. The Israelis were concerned about the Turks getting enough attention and translation. The Turkish Muslims were wanting to be respectful of the Israeli culture.” But soon, she said, “everybody just got over it.” What was absolutely evident, she said was “their immense longing” and that “it’s not somebody else that’s going to fix things.” Bringing peace to the region was going to be up to them.
Kimsey-House’s evaluation is echoed by the participants themselves. For Fulya Tanrikulu, from Istanbul, Turkey, the week felt like one big love-fest. “We were not Jews. We were not Muslims. We were not Turkish,” she said.  “There was no separation of identity. We were just together and one … That was the beautiful experience of …  experiencing that for six days in a row. Day and night we were together. We didn’t know each other. We never asked personal questions and we were not hungry for personal details. We were just loving and hugging and it was an incredible human experience. We all wished that for the entire world, to be united by love, regardless of nation, religion, race.”
Moran Danin, of Yokneam, Israel, was profoundly affected by the “very high level of intimacy and connecting.”  There was almost no need for words, he said.  “You could not talk to a person for two days, but still know that he knows that you know and that you both are dancing around an emptiness that’s full of love and caring.”


Monica Shosh, a Transylvanian participant, couldn’t get over the irony of  a 500-year history of Transylvanian-Turkish animosity becoming completely irrelevant. “Here we were in the leadership course, loving each other more than Transylvanians and Turks ever loved each other.”


Ali Tumay, from Istanbul, Turkey, remembers being in tears on the retreat’s last day, as he told everyone it was a good thing his wife had taken Leadership because “she would understand perfectly that I’m in love with 20-plus people of different ages, sexes and nationalities.”


Ayelet Sivan, from Beit Herut, Israel, simply said that the retreat “was like being in heaven … People coming with open hearts, loving and letting themselves be loved.”


Esti Rabinovitch, from Hod HaSharon, Israel, said that Leadership shook her to the core of her being, “because it was so strong, so gentle and strong at the same time so in the heart, really completely in the heart … It was amazing.”
As back-of-the-room assistants, Dana Berenzon and Abi Shilon were witnesses to it all. Berenzon: “It touched my heart to see people let go of, ‘I’m Turkish, I’m Israeli, I’m this.’ Because basically, we are all people.”  During the retreat’s first hours, she recalled, “you could see that there was a lot of, I won’t say tension, but things weren’t sure … but the minute that they all connected through their hearts … it was amazing. Suddenly there were no differences … only hope and we’re all the same.” Berenzon admitted she wasn’t sure it would work out as well. The fact that it did, she said, “brought me a lot of hope that peace can happen. For me it’s not about the politicians … it’s the people who bring the peace. So now there are 19 ambassadors of peace in Israel and in Turkey.”


Abi Shilon tells an interesting story about how this particular leadership tribe got its name. Most tribes are pre-assigned a name by CTI, but for some reason or another that never happened in this case. Shilon described how the tribe got its name.


“We stopped at the beach in Caesaria on the way back from the ropes course to Beit Daniel,” he recalled. As their tribe gathered for a photograph in front of the town’s famous Roman aqueduct, one of the Israelis was inspired to suggest they take their name from the ancient structure.


“An aqueduct is something that brings water to dry places to evoke blooming and growth,” said Shilon, “while this tribe has the potential to irrigate this part of the world to grow out of its arid, stuck and hopeless situation.” It was the perfect metaphor.


Since Dori Ben Chanoch completed Leadership over a decade ago, he committed himself to bringing CTI coaching to Israel, a goal that he fulfilled.  His bigger dream of a Middle East transformed by people who embraced a philosophy of mutual respect and collaboration, felt much more distant. In the aftermath of this retreat, however, he has been filled with a renewed sense of hope.


“I look at (this Leadership tribe) and I’m inspired,” he told the HJN. “I look at them and I feel they’re saying, yes you had a dream and this is something we’re wanting. Let us partner together with you and make it real.”
If there was ever living proof of the relevancy of father of political Zionism, Theodore Herzl’s words, “if you will it, it’s not a dream,” it is in the experience of Ran Menashe, who, over lunch with Karen Kimsey-House halfway through the retreat, told her about his dream.


“I told Karen it’s not exactly a dream,” he said, “but what’s going to happen.”   “I looked at her and told her, ‘I don’t know if you know it, Karen, but all four retreats are going to be with you, in Israel.”


Whether it was just another example of Israeli chutzpah or Menashe’s ability to see into Kimsey-House’s heart, his words proved prophetic.


“I just fell completely, totally in love with them,” she said, “and I couldn’t imagine them going on without me … What I got really clear on in this leadership program is that  it’s unstoppable. Something really important is going to come out of this and I want to be there for the rest of the journey.”