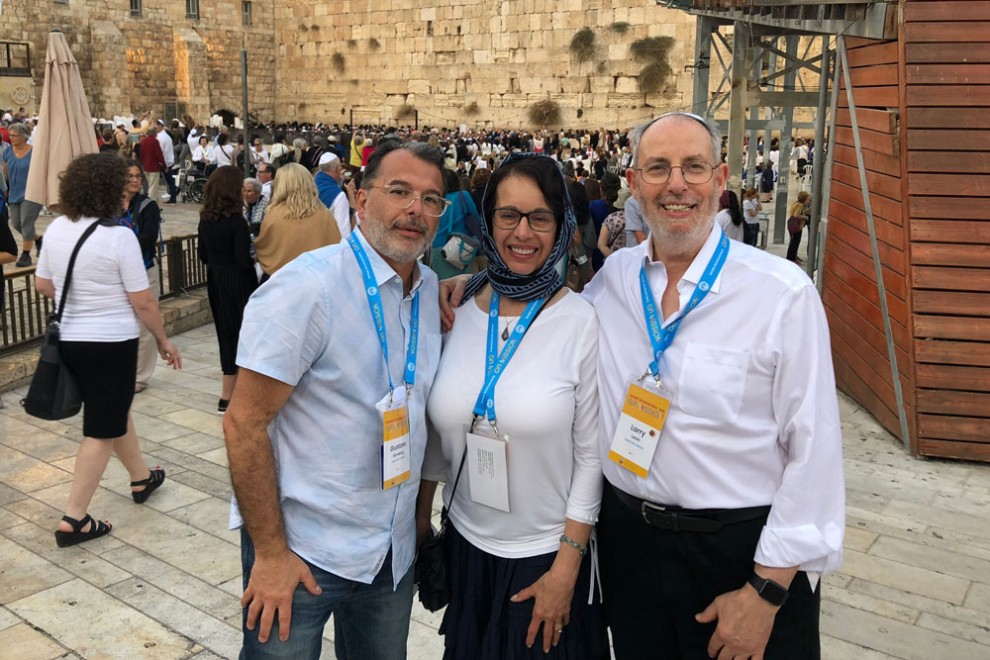 I have toured much of Israel, but had never participated in a mission until this past October, when my husband, and I, together with Federation CEO Gustavo Rymberg, took part in a Canadian mission to Israel  arranged by the Jewish Federations of North America (JFNA). The mission was followed immediately by the annual JFNA General Assembly (GA) which was held this year in Tel Aviv to celebrate Israel’s 70th Anniversary. Both experiences were overwhelming in what we saw and learned about Israel's challenges, strengths and how the country is exporting its expertise in so many fields to the rest of the world.

We began our mission in the Upper Galilee where we toured the area  and visited projects funded by Canadian federations. We travelled to Tzfat, where we learned about its history as a centre of Kabbalah and how the city was levelled by an earthquake in 1837. In Metulla, we visited the Canada Centre, home to Israel's largest ice-skating rink and funded by Canadian Jewish federations, including our own.Canadian federations also funded a children’s playground at Kibbutz K’far Giladi, and an innovative learning program developed at Tel Hai College for elementary students.

Some people are under the mistaken impression that money raised by Federation goes to the Israeli government. The truth is that our community supports projects that help children, immigrants, the poor and the sick — projects that are vital to the growth of Israel.

Our group of 85 Canadians spent Shabbat in Jerusalem, joining up with 1,000 participants of other JFNA missions for a Kabbalatt Shabbat ceremony outside the Old City walls.  From there, we walked to the Western Wall.  Being among thousands of Jews who had gathered there to welcome the Sabbath was a very emotional experience.

The most interesting part of the mission was visiting Israeli communities on the Gaza border.  At a small memorial park located just 800 metres from Gaza City, dedicated to the soldiers killed in the 1950s while fighting Fedayeen terrorists, we were briefed by an IDF soldier on the ways in which the Israeli army has responded to constantly changing modes of attack from Gaza. We learned how Israel has responded to each new form of attack with characteristic innovation.  In response to rocket launches,  Israel developed the Iron Dome. To stop infiltration through tunnels, Israel is in the process of  building a 100 ft. deep underground wall, studded with sensors that can detect any movement. With that avenue closing, Hamas has resorted to sending incendiary balloons and kites, which the army is responding to by using drones. Now Hamas is using a new tactic — psychological warfare. Many Israeli communities are located less than one kilometre from Gaza City, and Hamas has recently started using loudspeakers throughout the night with terrifying messages in Hebrew like “We will kill you. We will rape your women.” It is especially terrifying for children to hear these messages, preventing them from sleep.

In Sderot, a community of about 25,000 in the western Negev less than a mile from Gaza, we learned about the Israel Trauma Coalition (ITC), which works with residents of Sderot and surrounding communities to help them cope with the trauma of the situation. We also heard from therapists who are using small animals to provide nonverbal treatment for children suffering from trauma. One of the most poignant observations is how things that children love, like balloons and kites are now the things that they have learned to fear. The expertise of the ITC is exported all over the world when needed and they recently sent a team to Pittsburgh after the synagogue shooting.

The mission provided us with a wonderful opportunity to see and experience things that we couldn’t have done on our own and we learned a lot.

Some overall impressions of amazing Israel: Israelis don’t live in fear. They live vibrant, full lives. but there is always the need to be concerned about security. On kibbutzim, as in large Tel Aviv apartment buildings supported by the government, people are adding safe rooms — safe from rockets and from earthquakes.

The technology boom in Israel is incredible. There are delegations from countries and multi-national organizations constantly visiting the country to see this, partnering with Israel and purchasing Israeli companies and inventions. The towers in the cities are ultra-modern.  New skyscrapers are going up all the time and the Tel Aviv skyline is breathtaking. Israel had more tourists this year than it has ever had. And, of course, the food and wine are outstanding.

The JFNA General Assembly began in Tel Aviv following the mission. The theme of the GA was “We Need to Talk” and focussed on the differing views  of Israeli and diaspora Jews. It was fascinating, informative, often emotional and always overwhelming — but that is for another article that will appear in the next issue of the HJN.