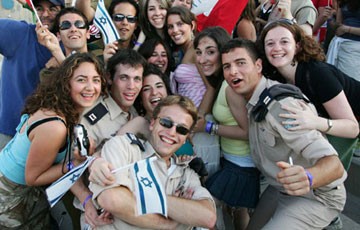 It has become as much a rite of passage as a bar or bat mitzvah: Birthright Israel, now in its 15th year, has sent more than 400,000 college-age North Americans on an all-expenses paid 10-day trip to Israel.  A half-billion dollar venture jointly funded by private philanthopy, the Jewish Federation system and the Israeli government, Birthright was originally conceived as a way of battling rising assimilation rates among North American Jews. But according to Professor Shaul Kelner, associate professor of sociology and Jewish studies at Vanderbilt University, the featured speaker at this year’s Goldblatt lecture, Birthright has surpassed its founders’ expectations by its evolution into a leadership development program that is creating tens of thousands of young Jewish leaders.

Among the topics that Kelner will address is how the act of touring can shape identity, a uniquely Jewish phenomenon that dates back to the first Israel experience trips of the 1950s. But Birthright broke new ground, Kelner told the HJN in a telephone interview last summer, in three essential ways: By innovating a form of entrepreneurial venture philanthropy intimately tied to the rise of family foundations, by  gearing its trips to college-age students (unlike earlier programs tailored for high school-aged participants) and by presenting the trips as a gift from the Jewish community.

“The question of whether the trip should be free was incredibly controversial ... In Israel the thinking was, why should we spend our tax shekels on these affluent North American Jews when we have pressing needs  at  home?”

The potential of Birthright Israel to further the cause of Israel advocacy in an increasingly anti-Israel world seems a no brainer, but  Kelner said that when the program was created in the mid 1990s, the Israeli-Palestinian conflict was irrelevant to what the program was about. “Peace was on the horizon, and Israel was essentially seen  as a means to the end of diaspora Jewish continuity and revitalization,” he said. But when the peace process collapsed and the second intifada began, “then you had a debate within the program itself about whether the program would also have as a goal creating goodwill ambassadors for Israel who were going to speak up for Israel in the diplomatic front.”

Kelner believes that, from both the Israeli and North American perspectives, Birthright has proved its worth.

“Think about it this way,” he said. “You’re sending hundreds of thousands of young North American Jews right at the point when they’re making their career and life decisions ... Even if only two people on each bus devote their lives, either as lay leaders or Jewish communal professionals, you still have a transformational potential for the North American Jewish community because it’s these leaders who will do the work of leading and building Jewish life.”

One of the most interesting, and poignant of Kelner’s conclusions is his observation that many young Jews return from their Birthright trip feeling unsettled in both Israel and back home. Kelner  explains: “Participants are encouraged to talk about their feelings about being an outsider in the countries that they live in ... It creates a sense, on the one hand, I’m fully Canadian and I especially feel it when I’m in Israel because I don’t speak the language and the culture’s different ...  And at the same time, I’m a minority in the country that I live in.”