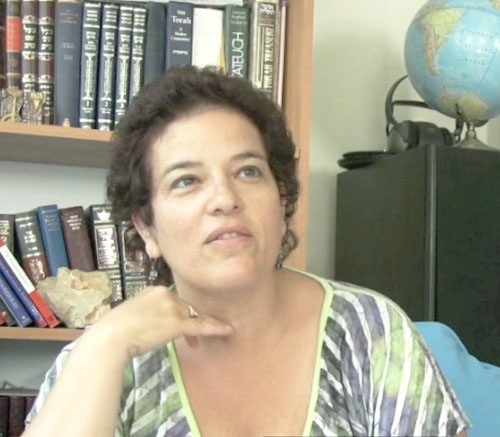 Most of the interviewees were born during the first decade of Israel's existence, when the concept of a Jewish State was spoken of in the family home as a miraculous event.  Many spoke of  their own longing, once they came of age, to see for themselves the miracle of which their parents and grandparents spoke.

A significant number attended the Hamilton Hebrew Academy (HHA) or were deeply influenced by the Adas Israel's Rabbi Morton Green, who often spoke about the importance of moving to Israel. Out of former HHA student Shari Pilo's (nee Wright) graduating class of 12 or 13, more than half made aliyah, a remarkable statistic.

Rochel Seidenfeld
Most former Hamiltonians live in large urban centres like Jerusalem and Tel-Aviv or in the smaller communities like Ranaana, Herzliya, Beit Shemesh, Modi'in and Zichron Ya'acov.  A small number live beyond the Green line - in Ma'ale Adumim, Tekoa and Efrat.  Only one former Hamiltonian lives on kibbutz. Most live in English-speaking neighbourhoods. Rochel Seidenfeld,  a daughter of Rabbi Morton and Sylvia Green, for example, described her daily routine in Efrat  - almost 100 per cent populated by English speaking immigrants, as no different than her former (married) life in Toronto.


Worldview
The majority of those interviewed self-identify as orthodox Jews, and their  comments about life in Israel were focused primarily on the joys of living in an environment where the Jewish calendar is so dominant.  They tended not to dwell on the Israeli - Palestinian conflict or on societal disparities.

Those who self-identify as secular or "traditional", a word that has come to refer to any religious stream other than orthodox, were more likely to voice criticism of government policies.  South African born and raised, Shifrah Alleson, a founder of Na'amat Canada's Hamilton chapter, voiced concern about an increase in legislation that targets left-wing and human rights groups.   "The left ... has totally disappeared," she said. "and the whole country seems to be run by little interest groups."


When it came to weighing in  the possibility of establishing peace with its Arab neighbours, it was sadly apparent that everyone  appeared to hold the belief that the two sides are farther apart than ever before.


Dodo and Jerry Pollock
Without exception, every interviewee sang the praises of raising children in Israel.  Israeli kids, they say, are more independent, self-aware, knowledgeable and altruistic than their Canadian counterparts.  Furthermore, many stated emphatically that the day their child joined the IDF was the first day they saw themselves as truly Israeli. Both parents and grandparents talked about their children's army service with tremendous pride, albeit mixed with sadness that so many years after their own aliyah,  peace remained elusive.


Challenges
For those who made aliyah past the age of 30, one of the greatest challenges has been attaining  fluency in the Hebrew language. In contrast, those who made the move in their early 20s, managed much better. This demographic, however, is experiencing real emotional turmoil at being so far away from their aging and sometimes ailing parents.

The economic pressures of living in Israel were universally acknowledged as an ongoing source of stress. Even for those who are managing quite well financially, people expressed concerns for the next generation's ability to make ends meet.  The interviews coincided with the large scale tent protests in cities that took place across the country throughout the summer of  2011 and almost everyone referred to the social unrest as something they could relate to.


Canada versus Israel
In 1996 Dodo Pollock's T-shirt store in Tel Aviv's Dizengoff Center was badly damaged in a suicide bomb attack.  The shocked and stunned Pollock was pulled to safety by a passerby. Did the  thought of packing up and returning to Canada enter her mind?   "Oh goodness, no," she said.  Paradoxically it's in Canada where she feels "scared out of my mind." Why?

"They don't look at my bag when I'm going into a department store."


Both Dodo and her husband, Jerry Pollock say nothing could ever make them leave Israel  because of the friends they've made there.

Rachel Jonah
"There's a lot of people with whom I resonate, spiritually, emotionally, culturally," said Rachel Jonah, a massage therapist and yoga teacher. "I don't think there's anywhere in the world where you could find so many like minded people in terms of community ...  As soon as you leave and you're in a different airport it feels different ... You can't take this energy and put it somewhere else. Once it's under your skin and it's in you it's very hard to be anywhere else.That's what makes me stay. I've tried leaving and it's just not possible."