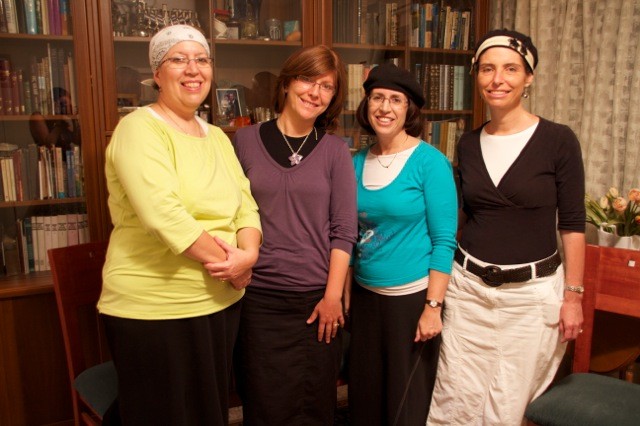 In what way did growing up in Hamilton help plant the seeds for your future aliyah?

Yvette: Hamilton was a really small and close-knit community and your Judaism wasn’t taken for granted ... It was more of a conscious decision.

Shayna: After I spent a year studying in Israel after high school, I had this quandary about whether to stay in Israel for college or go back to the States or Canada. I was thinking, ‘Do I want to go to Toronto? Do I want to go to New York?’ And all of a sudden it was either Hamilton or Israel ...  because while New York or Toronto had nice big Jewish communities, there was something missing. There was something about the warmth of Hamilton’s Jewish community that made me realize it’s either there or here.

What did you feel was missing in your life in Canada and did you find it when you came here?

Harold: I remember having a conversation with one of my former bosses as I was being promoted.  I was shomer Shabbat (observant of the laws relating to Shabbat) and I left early on Fridays and took all chagim (holidays) off. One time my boss came over to me and said, “You know the company has tolerated your… taking time off but at some point in your career you’re going to have to make a choice if you have intentions of going up the career ladder.” That really struck a chord with me, and while it didn’t make me feel I had to move, once I moved to Israel I realized that everywhere you were it was Jewish and it’s such a wonderful and warm feeling.

Yvette: I think it’s a a retroactive kind of answer. Once you’re here you realize that Jewish life just makes more sense here. The pomegranates ripen around Rosh Hashana. We have an etrog tree in our backyard and we get etrogs for Sukkot and in the supermarket you’ll see dried fruit for Tu Bi’shvat.You can live as a Jew here. And then I also feel you live a more real life. There are real concerns – a lot of them – and it can be stressful living here at times, but I think that there’s a lot less external fluff.

Shayna: There’s also a flip side.  Although it’s very easy to be religious and Jewish here, when you grow up religious in Hamilton, it has to be your own thing. You’re not just doing it because everyone else is doing it. You understand why you’re doing it. It has more meaning. You feel like you’ve earned it. So that’s perhaps a challenge of living in Hamilton that I definitely liked. As I get older when I meet someone from Hamilton there’s a very strong connection. You understand each other. There’s something that our kids are not getting automatically –  that understanding, the knowing that people are not exactly like you. There’s the “Why I’m doing this.”  Why you might look just like all of your friends but you’re different and doing this for a reason. Growing up in Hamilton you really get that privilege to be able to have a deep understanding of what you’re doing and why you’re doing it. And also coming to Israel, which has such a wide range of Jews living here, you have an appreciation for everybody because you grew up in Hamilton with so many different types of Jews.

What’s it like for you to have children serving in the IDF?

Beth: When I think about sitting on the outside and looking at Israeli parents who send  their kids to the army it’s much more frightening and daunting.  When you’re here and your child grows up here and he becomes 18, 19, or 20 – whatever maslul (track) he decides to do – he’s ready. He can’t imagine doing anything else. This is what he’s been raised to do and he helps you through his army experience. it was probably the most important part of our klita (absorption process). And it happened 15 years after we moved here ... We don’t feel sorry for ourselves that our sons go to the army.

Harold:  All of our sons made aliyah while they were in the army. We were living in Toronto through most of their tenure in the army. Our middle son just signed up for five years of miluim (the reserves). None of my boys have to do miluim but each one feels that that’s part of his responsibility of living in Israel... When you think about army service in Canada there’s no comparison whatsoever with serving in the Israeli army.  You understand that the welfare and security of Jewish lives is at stake. So you look at it much differently.

What are pluses of raising children in Israel?

Susan: The independence. There are only 80,000 people liviing here in Beit Shemesh. It’s not a metropolis.  If your kid gets locked out when they’re little there’s always going to be a neighbour who will take them in. When we lived in Toronto we had no idea who our next door neighbour was.

Yvette: In North America high school kids after graduation are thinking about what they’re going to do or about their career and it’s a totally different mindset. Here, kids know there’s this thing that’s bigger than you that you serve and you give three years of your life and it’s a big deal. And then maybe you travel. And then you start university. I have a son who’s 24 and he just started his first year of university. So it’s a very different kind of thing.

Is it scary to live here?  Do you feel that Israel’s existence is under threat?

Harold:  There are security issues here, but  look at the flip side — that 10 and 11 year old kids are on the bus going from city to city on their own and kids from Toronto or Hamilton can’t walk from their home to school on their own or can’t go out in the dark.  What’s better? There’s no easy answer.

Susan: The issue is that if there’s trouble we’re where we’re supposed to be. We’re not looking at it from the outside. We’re participating. I also think maybe we’re all a little bit crazy. But we all know to be a realist in Israel is absolutely to depend on miracles. It’s like trying to explain to somebody why you fell in love with someone and they just don’t see it.

Do you feel  like you need to travel  to get a little bit of a break?

Beth: As much as I love to visit family. There is nothing like the sigh of relief when that plane lands ... I feel a certain anemia when I go back to Canada because there’s a lack of depth. Everything is very civilized and works and you just chug along and it’s all so easy, but there’s an anemia there. There’s no anemia here.

Yvette: When we first made aliyah we used to go back a lot and it was really hard. I think when you do it too soon after it’s hard because it feels like you’re making aliyah all over again. And we would leave my parents behind. I think the longer you’re here the more you feel anchored here so it’s nice to go visit.  Where I live,  in Ma’ale Adumim, it’s very stark so last June, which was the first time I’d been back in Canada in five years I was just drinking in the green, the grass.  But the flip side is sometimes you think all they have to worry about is the environment and the recycling … that was the biggest issue.

Renee: Anything good is worth suffering a little bit for. You know if you have a good marriage it’s because you worked on it and it’s had its ups and downs and raising children and being pregnant and delivering them it’s not all good and happy. But everything good in your life is something you’ve worked for.

Shayna: I just went back to Hamilton for the first time in six years since I left the country. I saw classmates and teachers I hadn’t seen for 15 years. There was this electricity in the air. A certain warmth. It brought me to tears. I can’t explain it, the warmth and connection.

Beth: I really credit your parents (Rabbi and the late Esther Eisenstein) with our aliyah. I think that your parents sent a lot of people on their way.  Hamilton was a springboard for making aliyah. I think it was the foundation, whether it was Zionism or Judaism or Jewish identity or feeling as an important, separate group, a family. I think in that sense Hamiltonwas a springboard to coming to the bigger family.

Need to know:
Rabbi Steven and Beth Cohen made aliyah in 1994. They live in Beit Shemesh, a community just outside Jerusalem located off the Tel-Aviv - Jerusalem highway.  Beth is a pscyhologist in private practice. Steven is the head of the English department at a local high school.  They have four children, ages 21, 19, 16 and 11.

Shayna (Eisenstein) and Yehoshua  Duker made aliyah in October, 1997.  They live in Ramot Beith Shemesh.  Shayna is currently a homemaker and Yehoshua teaches in a yeshiva. They have six children, ages 13, 11, 10, 8, 5 and 2.

Susan (Yaffe) Fisch made aliyah in 1981. In Israel she met her husband, David Fisch, an oleh from Brazil. They live in Beit Shemesh.  Susan is the chief technologist in MRI at Hadassah Medical Center. David works in the head office of Bank Mizrahi Tefahot, in the finance department. They have one son, age 13.

Marci and Harold Rapp made aliyah in July, 2008. They llive in Katamon, a neighbourhood in Jerusalem.  They are the manufacturers of MarSea Modest swimwear. They have four children, ages 26, 24, 22 and 16, all of whom live in Israel. They have two Israeli-born grandchildren.

Yvette (Sternberg) Shumacher and Marvin Shumacher made aliyah in August, 1993.  They live in Ma’ale Adumim, a bedroom community outside of Jerusalem.  Yvette works as a translator and editor at the Israel Council on Foreign Relations. Marvin is the export sales manager for an aluminum extrusion company called Extal. They have five children, ages 24, 22, 20, 16 and 12, two of whom were born in Israel.