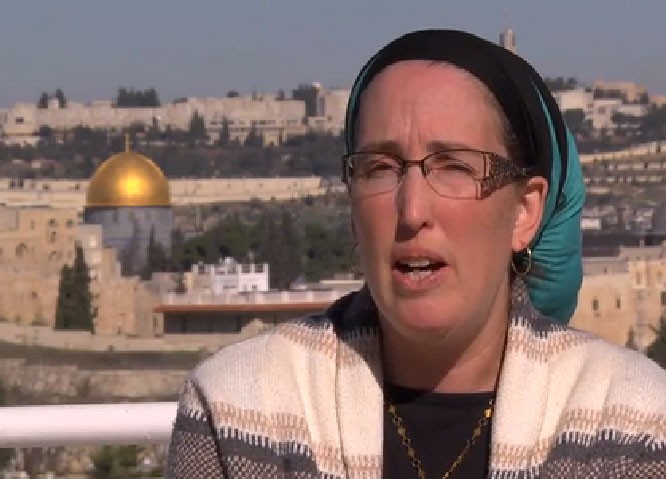 December 2016
by Lazar Berman
Reprinted from the Times of Israel

The Times of Israel blog The Truth Between Us is an ongoing dialogue between Murray Watson, a Canadian Roman Catholic theologian and biblical scholar, and Times of Israel news editor Lazar Berman, in which the two explore a wide range of issues surrounding Jewish-Christian relations. Below, Watson interviews former Hamilton resident Professor Faydra Shapiro, the founding director of the Galilee Centre for Studies in Jewish-Christian Relations at Yezreel Valley College, located just outside of Nazareth. Her most recent book tackled the subject of Christian Zionism and was published in 2015.

MW: Many of the Christian groups voting for BDS distinguish between legitimate efforts to critique or influence Israeli government policies, and positions that are essentially anti-Semitic, because they seek to delegitimize or undermine the State of Israel. In your view, when does that line get crossed—and does it seem to you that some of these BDS campaigns may actually be anti-Semitic or anti-Jewish at their core, although cloaked in more sympathetic language?

FS: I don’t think that BDS campaigns usually come from a consciously anti-Semitic or anti-Jewish source. I believe that many good people around the world are simply appalled at what they see on the news. They believe they understand its cause, and they are desperate for a simple and strong solution. People are eager for the ongoing violence to be the result of a problem (“the Occupation”) that we can fix (with a negotiated two state solution) and then it will go away and everyone will get to live in peace and security. I’m not so optimistic.

Despite my belief that this impulse to find a solution isn’t consciously anti-Semitic, it’s important to understand that Christian BDS campaigns take place in a historical context of Jewish-Christian relations. When some Christians communicate to Jews who have their first crack at independent, sovereign rule in 2,000 years that – in essence – they Christians know better than Jews do, that Jews are basically being stubborn and too worried about their (our) own survival, that we should be more willing to risk and to trust and on top of that, that if we don’t “behave” properly, well, they will have nothing to do with us, frankly, it all rings a little hollow.

It’s very reminiscent of older Christian tropes about Jewish ethnocentrism (versus Christian universalism) and error (rather than Christian enlightenment). And the idea of our taking more risks and being less intensely focused on our own survival is a little rich coming from the Christian world that served as the single greatest threat to Jewish survival for 2,000 years.

MW: Many of these churches and church groups have been involved in Jewish-Christian relations for many years — even many decades, and have published significant documents emphasizing the importance of strong, healthy Jewish-Christian relations. Do you see church-sponsored BDS campaigns as effectively contradicting or neutering those documents? Do those statements still have credibility for you when a denomination or inter-church group espouses BDS as their corporate policy?

FS: This issue troubles me deeply, as someone committed personally and professionally to building better Jewish-Christian relations. One of the basic requirements of interfaith dialogue is to try to understand the Other from within their own system of beliefs, priorities and culture. That can be a real challenge — to commit to understanding and trying to maintain the plausibility of beliefs and practices you don’t share.

And at its base it requires three fundamental skills or investments: education, engagement and empathy. Obviously “agreement” is not one of the requirements. Jewish-Christian relations presumes a degree of disagreement, otherwise, well, there wouldn’t be much to talk about.

Disagreement is fine. But the BDS movement, by putting a blanket ban on Israel, effectively violates each of the criteria I’ve proposed above for interfaith understanding. And when it does so about Israel, which is one of the very few things that, arguably, almost all contemporary Jews agree on, that creates a real problem for Jewish-Christian relations.

One of the most serious consequences of Christian BDS campaigns is that they confirm some basic Jewish anxieties about Christians vis-à-vis Jews, and thereby threaten a great deal of good, hard work that has been done in Jewish-Christian relations since the Second Vatican Council.

MW: In my homeland of Canada, approval of a BDS resolution by a major Canadian Protestant church led to the suspension of Canada’s national Jewish-Christian dialogue, which has now been unable to meet for more than three years. Of course, the most important work of dialogue occurs precisely when there are this type of serious disagreements or disputes between the parties. How is it possible to maintain a meaningful dialogue when the positions of the Christian and Jewish partners often seem so far apart? How do you manage to keep the lines of communication open in the face of radically opposed visions? What contributions can interreligious dialogue make to resolving such an apparent impasse?

FS: It’s really quite remarkable. You would think that people engaged in Jewish-Christian relations should be well-versed in the art of two things: respecting red lines, and dialoguing despite disagreement. We should be able to talk about Israel and our different commitments, visions, fears and hopes in the same way that we manage to engage the other basic topics about which we often passionately disagree.

But we also need to come to Jewish-Christian relations with an ability to understand the issue of red lines. That is, with respect for the commitments that are constitutive of who we are. Like Jesus, for Christians. Like Israel, for Jews.

So to better answer your question, our experience of interreligious dialogue should be itself the argument against BDS, and against the kind of thinking that shuts down engagement in the face of disagreement. Interreligious dialogue, and its successes, is precisely the contradiction to BDS.

MW: As an Israeli interfaith activist, what part of the “equation” do you think Christian BDS advocates are missing in their analysis? If you could speak directly to them, what one point would you want them to hear and understand accurately?

FS: I think Christian BDS activists miss how absolutely central Israel is for contemporary Jewish identity. And I don’t mean a particular political party or orientation. But simply the fact that Israel is considered a non-negotiable, critical element in the survival of the Jewish people and culture. It’s not optional, it’s not right-wing or left-wing. It’s our past and it’s our future.

The Christian world needs more engagement and more education when it comes to Israel and the Jews. Not less. The BDS movement sadly, enshrines ignorance and isolation.