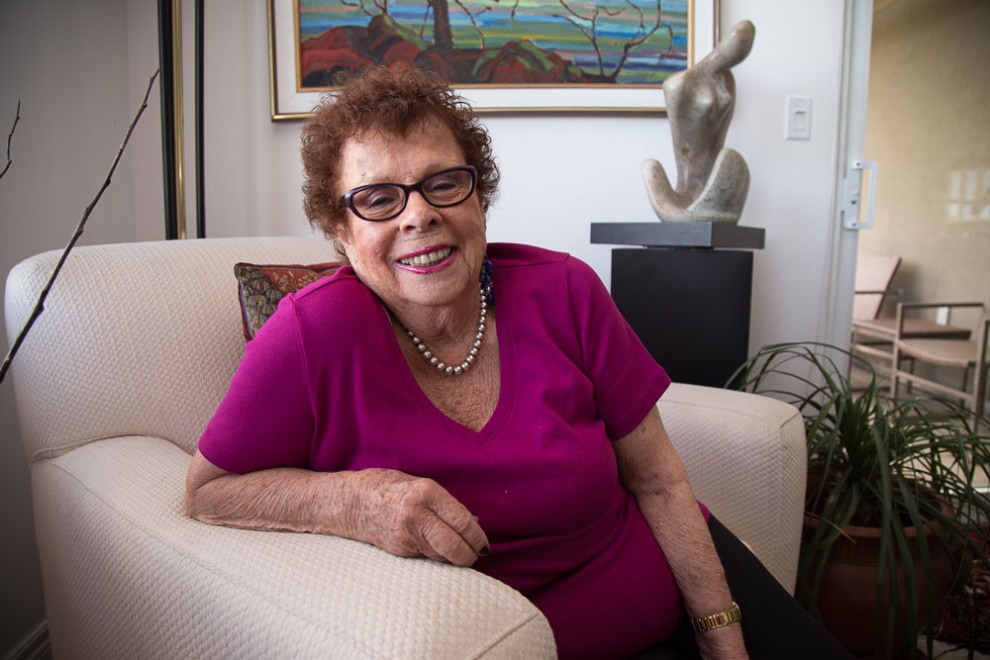 A force of nature, Batia Phillips is a woman whose joie de vivre, love of people and hearty laugh immediately endears her to whomever she meets. Phillips has experienced more than her share of personal loss and challenges, but neither the untimely death of a daughter, the loss of two husbands and a dearly loved companion, or a myriad of physical challenges have diminished her irrepressible spirit.

Last May, the Adas Israel honoured Phillips at a special Shabbat marking Israel’s Independence day. Asked to prepare some remarks about her Palmach days, Phillips began by placing herself squarely in a particular moment in the country’s history.

“I consider myself a daughter of the ‘Dor Ha’Nefilim,’” she said, literally the “generation of giants” who became Israel’s founding generation. But despite what must have been a  tumultuous time for her parents, Phillips described a carefree childhood playing on the “gentle streets of Haifa.”

At the age of 15, Phillips’s parents sent the young teenager to Kibbutz Dalia to complete her high school education. In those years, the kibbutzim were practically synonymous with Palmach training grounds, where fighters were housed and fed in exchange for guard duty and agricultural work. Soon after Phillips’s arrival, she and her new classmates joined the Palmach and began military training.

With the official end of the British Mandate following the UN General Assembly vote in November 1947 to approve the creation of a Jewish State in Palestine, Phillips’s unit was sent to secure an abandoned British army base, located near the Lebanese border.

Finding  themselves in what was essentially a “sitting duck” situation, the fighters were bombarded by Egyptian artillery with no shelter.

“I suppose I can admit now that it was very frightening. One of our jeep drivers was killed. Unknowingly, my husband to be, Jacob Gutman, took over the jeep that was damaged by these bombs, and (later) fought in a unit that called itself ‘The fox of Samson,’ which harassed the Egyptian army.”

Following Israel’s declaration of independence in May of 1948,  Phillips’s Palmach unit, now integrated into the newly established Israel Defense Forces, was transferred to Kibbutz Yehiam, just south of the Lebanese border.

There, she continued, “We were unexpectedly attacked by the Syrians. The situation was dire, as we only had light weapons to defend ourselves.”

When her company commander took a bullet to his head, Phillips ran to his side.

“I took off the khaki shirt I was wearing and bandaged him with it. He was unconscious so I picked up his rifle and started shooting back.”

Meanwhile, the Syrians, standing on the surrounding hills, observed everything.

Later that week, Phillips’s state of undress was reported in the Syrian press, that reported how “the Jews have the women fighting for them instead of the men.”

Little did they know, that woman was just Batia being Batia, then, as now, fearlessly confronting life’s challenges and selflessly doing whatever is needed to protect the ones she loves.

Batia Phillips's Palmach days in her own words:

As most Jewish stories go, mine begins before my time, namely with my parents. I could go further back than that if course but then we would need to study some Torah. I consider myself a daughter of the Dor Hanefilim, which translates to the generation of giants. My parents were among the giants. They immigrated to the British Mandate Palestine in the 1920s. They had the foresight  to see the coming storm in Europe and the courage to leave behind their familiar homes in the Ukraine, for a hostile country which, however was the Zionist dream coming true.  They gave birth to me and raised me and my brother in the city of Haifa.

Though the world was on fire, my youth was characterized by a carefree life playing with my friends in the gentle streets of Haifa. But, as I matured, my parents felt that my education should be enhanced, and so sent me at the age of 15 to Kibbutz Dalia to complete my high school training. World War II was still raging and there was much discord in Palestine between Jews and Arabs at the time. As the horrors of the Holocaust became known, the world blinked momentarily, turned away from anti-Semitism for a brief enough period so that in November 1947, the UN voted for the partition of Palestine into Jewish and Arab states. One day after the vote, the surrounding Arab countries and the Arab inhabitants of the area began to fight in earnest against the creation of a Jewish state. Up until then, there had been many skirmishes and many dead on both sides, due to what was essentially a civil war between Jew and Arab.

During this period there were several Jewish militias, each tied to their own ideology, which at times fought each other, but ultimately banded together under the banner of what was called the Haganah, the precursor to Tzahal, the Israeli Defense Force. One of the these militias was the Palmach. The Palmach was considered an elite fighting force associated with the kibbutz movement and aligned with the left. Many of the great Israeli political and military leaders originally came from the Palmach, such as Yitzchak Sadeh, Yitzchak Rabin, Yigal Allon and Moshe Dayan.

Our class volunteered to join the Palmach shortly after I arrived in Kibbutz Dalia. Typical of Palmach training, I worked the fields of the kibbutz, studied and was trained in the arts of war and troop support, although we had no real weapons at that time.  After the partition vote, one of our first victories was the battle where we conquered Nebiusha, just south of the Lebanese border. We were then transferred to Sarafent, an abandoned British army base, where the Egyptian army started dropping bombs on us and we had no shelter.

I suppose I can admit now that it was very frightening. One of our jeep drivers was killed. Unknowingly, my husband to be, Jacob Gutman, took over the jeep that was damaged by these bombs, and fought in a unit that called itself “The fox of Samson”, that harassed the Egyptian army.

On May 15, 1948, Ben Gurion declared the independence of Eretz Yisrael. Very shortly after, he brough the competing Jewish militas under one command, and Tzahal, the Israeli Defense Force was born. The Palmach made up three of its 12 divisions.

Later we were transferred to Kibbutz Yehiam, just south of the Lebanese border, where w were tasked to defend against the Syrian army. We were unexpectedly attacked by the Syrians and the situation was dire, as we only had light weapons to defend ourselves. The Syrians had us surrounded and we were fighting for our lives. My company commander was at the perimeter shooting back when he was wounded badly. I ran up to him and as we were short on supplies, I took the khaki shirt I wore off and bandaged him with it. He was unconscious so I picked up his rifle and started shooting back.

The Syrians were on the hills above us and observed this. Later that week, the Arab papers reported that the Jews have the women fighting for them instead of the men.

After that, our group went to conquer Beer Sheva, which at that time, resembled a Bedouin camp and had very few buildings.

Eventually we received an order to establish a new kibbutz by the name of Har’el. I stayed in this kibbutz for a short time, and from there left for Jerusalem to study nursing.

I could tell you many more stories but the day is short and we need to eat lunch. I will therefore conclude by saying that I have been through many experiences in my life but that particular episode where I fought in the Palmach and survived the battles that led to the creation of Eretz Yisrael, was a once in a 2000 year opportunity and I am proud of it.