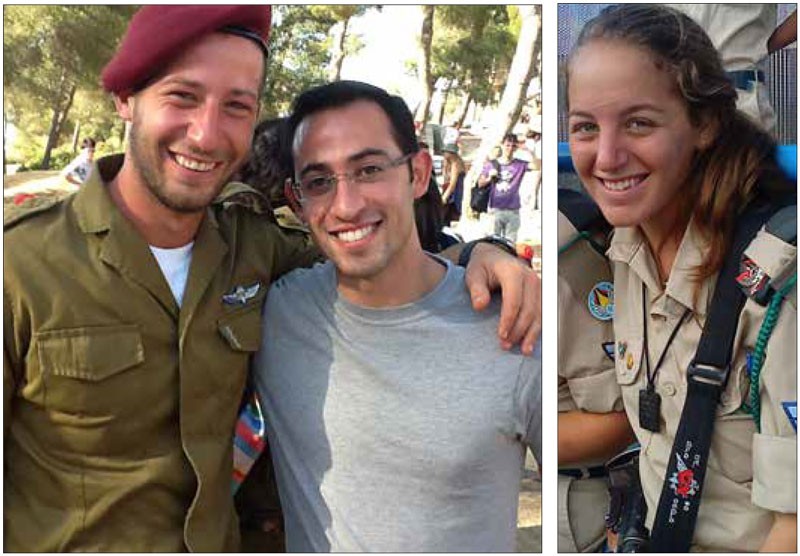 It began during Israel’s War of Independence in 1948, when approximately 3,500 overseas volunteers came to assist the nascent Jewish state in its fight for survival. The group was given the name Machal, an acronym of the Hebrew words Mitnadvay Chutz La’aretz, “Volunteers from Abroad.” The “Machalniks,” as they came to become known, were assigned to virtually every unit in the Israeli army, navy and air force, and played an essential role in the struggles that followed.

On the day of Max Steinberg’s funeral, 30,000 Israelis showed up as a gesture of support to his grieving family. The spontaneous and collective response to the death of the 25-year-old American recruit who fell in battle during 2014’s Operation Protective Edge is a dramatic illustration of how Israelis feel about their country’s lone soldiers.

The term lone soldier refers to young people serving in the IDF who have no immediate family living in Israel. According to the Israeli daily Ha’aretz, there were close to 2,000 new immigrant lone soldiers serving in the IDF last year. That number was divided among three enlistment programs that include Machal, now an 18-month program for those who aren’t ready to take out Israeli citizenship, Garin Tzabar, a two-year program where groups of approximately 20 soldiers live together at a kibbutz and experience their military service together and Hesder, a five-year yeshiva-based program that combines service in the Israeli army with advanced Jewish study.

Josh Goldberg, the son of Hamilton residents Joel and Lanie Goldberg and grandson of the late Rabbi Israel and Gloria Silverman, was in his third year abroad at the Hebrew University in Jerusalem when he first heard about Garin Tzabar. Attracted by the program’s kibbutz setting and its offering its recruits a built-in support system, he decided to finish his degree at York University and return to Israel the following year. In 2011, Goldberg, then 23, boarded  a chartered Nefesh b’Nefesh flight out of JFK along with 150 other lone soldiers. His group settled into Kibbutz Sa’ad near the Gaza border; that would be their home away from home for the next two years.

What motivates a person with a terrible fear of needles to sign up for a combat medic course? What does it say about someone who, despite a fear of heights, decides to try out for a paratrooper unit?  These are the questions that come to mind as Goldberg cheerfully recounts the time he fainted during a mock trauma exercise on the second day of medic training, or how he got through five parachute jumps.

“You have your parachute on and it hurts your back,” he said. “You’re nauseous. It’s really hot. Then you line up and all your friends just start disappearing out the door of the plane. And you just get to the door, you stick your hands out and you’re outside of the plane.”

It only takes a few minutes of conversation with Goldberg to grasp that his ability to see the world through an almost child-like lens of enthusiasm and positive thinking has served him well, and given him a level of maturity beyond his years.

Being an IDF soldier, “you overcome lots of psychological and mental blocks,” he said. “Lots of weeks when you’re in training exercise when you don’t get as much nourishment as you’re used to. You definitely don’t get as much sleep ...  but you just have to push through it and paint a smile on your face.”

Did coming from a relatively sheltered, North American background put him at a disadvantage?

“There are a lot of Americans who feel like that but I personally didn’t,” he said. “I knew what I was getting into, you know, the volunteer spirit, and I was very excited about getting my ass kicked a little bit.”

If anything, Goldberg said he felt at an advantage.

“I was 23 when I first drafted and everyone else was 18 or 19. So I had a little bit more perspective on life and could joke about things ... If I get punished for an hour, it’s only an hour, it’s not the end of the world, while these kids are basically just out of high school, an hour extra being on the base instead of getting to go home was a really big deal for a lot of them.”

Goldberg was in the regular army during the 2011 Gaza operation and in the reserves during 2014’s Operation Protective Edge, but fortunately, he has never seen actual combat. Still, his IDF experiences have brought him a level of acceptance into Israeli society that he feels he wouldn’t have had otherwise.

“It’s an experience that’s a really important part of the country,” he said, “and you’re just able to relate to people of the same generation a lot easier when you served in the same bases, you understand the same slang.”

There was never any doubt in Shmarya Green’s mind that one day he would be living in Israel. The son of Moishe and Faigy Green of Toronto, Green made aliyah in 2006 directly after he graduated high school, enrolling in Yeshivat Har Etzion, a Hesder yeshiva located in the south Judean hills outside of Jerusalem.

Green opted to register in the yeshiva’s Israeli stream, rather than its American program, “because I knew I was staying and that I wanted to go into the army so I spent a lot of time getting to know the Israelis because in the end you end up going to the army with them.”

It was a strategy that served him well when Green was later accepted into the paratroopers brigade along with 10 of his classmates. The support they were able to offer each other  was very helpful to him, especially during the difficult adjustment period.

“It was pretty hard in the beginning because you don’t know what to expect. The Israelis, I guess, are born growing up knowing that they’re going into the army ... and even though I had a lot of friends that went in before me, and I spoke to a lot of people, still nothing was really able to prepare you for (going from) being in charge of your life to being told every single second what to do.”

Within a month, Green understood the basic truth about army service, that “if you do what they tell you to do, things are going to be a lot easier.”

In the IDF’s official doctrine of ethics, The Spirit of the IDF, the code of “purity of  arms” states that, “The soldier shall make use of his weaponry and power only for the fulfillment of the mission and solely to the extent required; he will maintain his humanity even in combat. The soldier shall not employ his weaponry and power in order to harm non-combatants or prisoners of war, and shall do all he can to avoid harming their lives, body, honor and property.”

Asked to comment upon the extent to which he experienced that code being put into practice, Green reflected on a several month period in the territories, where his unit was assigned on anti-terrorism patrols.

“There were times when they were throwing rocks or Molotov cocktails at us, where we were not allowed to use deadly force,” he said. “You shoot in the air, you shoot at the ground, only last case scenario you’re allowed to shoot at their feet, because they don’t want to risk any possible civilian casualties, even if it means putting us more in harm’s way. So yes, I one hundred percent agree that the IDF is a moral army.”

Rebecca Baskin agrees. The daughter of David Baskin and Joan Garson of Toronto, Baskin enrolled in a commander’s course after her three months of basic training through the Machal program, and was soon herself overseeing basic training for new recruits.

An image of a petite Goldie Hawn shouting out orders in the film Private Benjamin immediately came to mind. But Baskin said her job involved  “more than just yelling at them.”

“There’s really a personal aspect of making sure that everyone is making the adjustment well because it’s a huge change,” she said. In addition to teaching basic army skills like how to use their weapons, Baskin led sessions on the IDF values.

“There’s a list of values that the IDF has decided are important for us to uphold, and as a commander one of the set talks that we would have with our soldiers was to introduce these values and discuss them, and then they were given moral dilemmas and asked to  talk about what would be the right thing to do and the right way to think about it,” she said.

“This is not an army that shies away from the difficult questions.  “They look difficulty in the eye and even soldiers, who are not combat soldiers, who are probably not going to be the ones standing at checkpoints —  the army makes sure that they’re thinking about these questions. That’s it not just empty wearing of a uniform that they know what they’re doing and why, that their power is not unlimited.”

There is great affection and appreciation, among Israelis and Jews across the world, for the young people who are putting themselves on the line to defend the Jewish State. But when it comes to global media, the opposite is the case. As a new immigrant who chose to serve in the IDF, Baskin was asked how the widespread demonization of Israel in general and  the IDF in particular, makes her feel.

“It feels really awful,” said Baskin. “Something that’s definitely different now from six years ago when I started living here is that  I’m more quiet with people who don’t know much about me.  Sometimes you just don’t want to have to deal with people’s reactions and being seen in a certain way and have certain assumptions made of you because of where you live. I think that Israel is deeply misunderstood .”

The common thread in the aliyah stories of Goldberg, Green and Baskin is twofold — each of them grew up in families with deeply Zionistic roots, and none of them felt the loneliness that can be the reality for some lone soldiers.Goldberg and Green both had the support of a large extended family in Israel, while Baskin was embraced by two separate kibbutz families, one dating back to when she was in Israel the first time during a gap year abroad, and the other that gave her a home away from home during her Machal years. What they also share is an idealism, a love of their new country and a driving ambition that will undoubtedly serve them well as they pursue the next chapter of their lives.

Goldberg is currently living in Jerusalem where he is enrolled in the Ministry of Tourism’s challenging tour guide course. After working for several years for an online payment service, Green is back in school pursuing a law degree at the Academic College of Israel in Ramat -Gan. Baskin, who became an Israeli citizen in 2011, is living in Ma’ale HaHamisha, a beautiful kibbutz located on the outskirts of Jerusalem, and pursuing a law degree at the Hebrew University of Jerusalem. She is currently considering either  a career in the foreign ministry or going into private practice  with a specialty in international law.

The life choices made by these three young people serve as the greatest possible affirmation of the values in which they were raised. They do their parents, their grandparents and all of us proud.