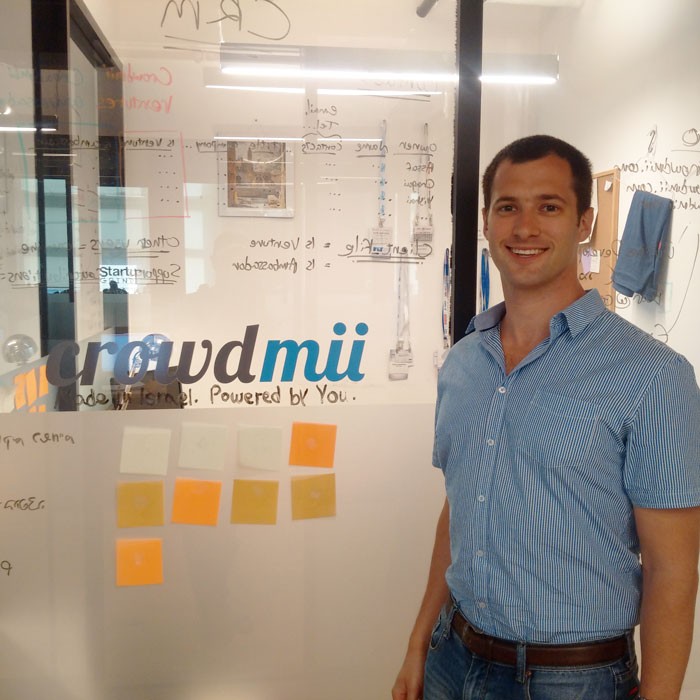 Israel is beginning to define itself and gain recognition as a nation of entrepreneurs, innovation and creative business. Since the 2011 publication of Dan Senor and Saul Singer’s book Start-Up Nation, Israel is increasingly living up to that moniker, with a thousand new startups launching every year and big-name companies such as Google, Microsoft and Facebook buying out startups and opening offices of their own.

Since my arrival to this entrepreneurial mecca a few weeks ago, I have heard numerous socio-psychological theories explaining this phenomenon that range from centuries of persecution of the Jewish people to Israel’s being a tiny, arid country in a hostile envrionment that created an impetus to innovate. Either way, there is no doubting the exponential growth of startups in the Holy Land.

I recently made the acquaintance of Assaf Luxembourg, a dynamic Israeli entrepreneur and CEO of Crowdmii (from “crowd made in Israel”), a new crowdsourcing website that makes it possible for Israel supporters around the world to support a start-up of their choice. Crowdmii will feature various start-ups who share an underlying theme of being a “light unto the nations.” As part of their business model, Crowdmii also offer a unique working model with individuals, organization and communities who care and advocate for Israel.

“This is the best response to those who say we should boycott Israel, or that Israel only does bad things,” said Luxembourg, who is passionate about promoting products and services that have the potential  to benefit people around the world.

Crowdmii's first featured Israeli start-up is “MyMDband,” a medical bracelet that can be scanned by any smartphone to provide paramedics and medical practitioners around the world with instant access to a patient’s select medical details and emergency contacts. In the event that someone is travelling to another country, the information will be automatically translated to the host country language and drug names will be updated for that country as well.

“There are tens of thousands of (patients in the U.S.)  who die in the ambulance every year because of a lack of critical medical information,” said Luxembourg,  who said that the startup created by a team of Israeli paramedics is a good example of the quality of products and services that can be found on the Crowdmii website. Crowdmii will also be running a simultaneous campaign that seeks to ‎raise money to provide a free MDBand to 1,500 Holocaust survivors throughout Israel.

Overall, the level of excitement about Israeli start-ups is palpable and is evident everywhere you look. Scanning the Tel Aviv skyline and seeing the world’s largest companies investing in Israeli innovation, it’s impossible not to feel inspired. It only makes sense then, to see a start-up help connect others to the Start-Up Nation.

Joshua Black is currently on placement at the Pears Challenge in Tel Aviv working with Israeli entrepreneurs developing agricultural innovations for smallholder farmers in the developing world. ‎He has a B.A from York U’s Glendon College in International Studies and a M.Sc in Integrated Water Resource Management from McGill.