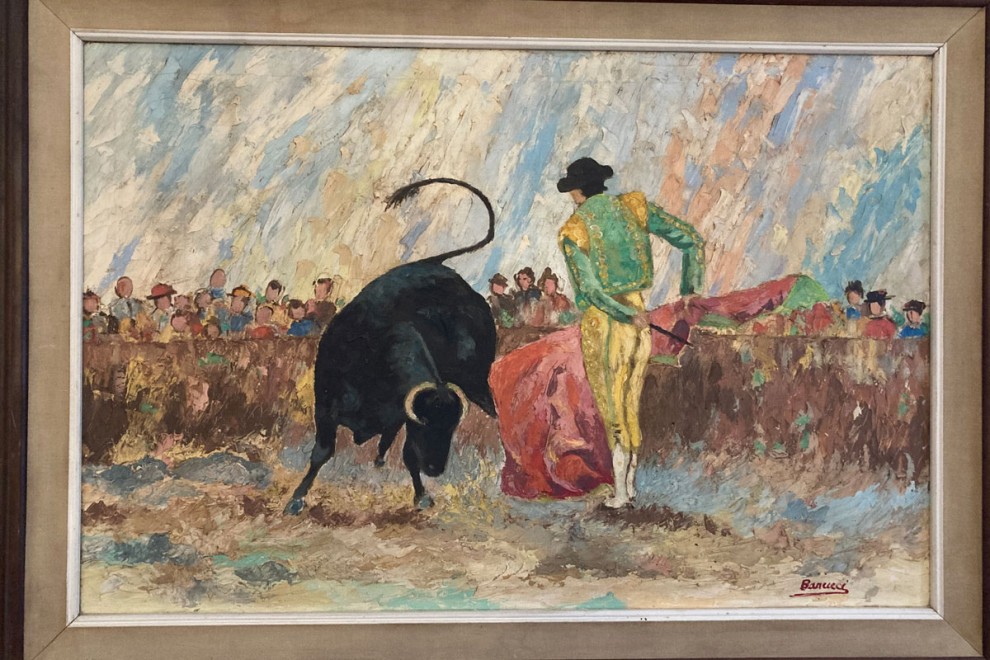 When I was growing up, a matador fighting a bull loomed large over the dining table. He taunted the black bovine with a swirling red cape, while hiding a dagger behind his back. I’m now an adult, with a home of my own, but that same scene has stayed with me: it now hangs over my couch.

In fact, Barucci was Boris Macrovitch, my great uncle. He was born in Odessa, a bustling port city in the Russian Empire, in 1907. In 1909, he moved with his family to the decidedly less bustling, but certainly more free, frontier city of Winnipeg, Manitoba. For reasons unknown, he later settled in St. Louis, Missouri, where he owned an art shop. He had no Italian ancestry and had never, as far as the record shows, been to Spain. He died in 1981, four years before I was born.

I was named after Boris; though my parents, thankfully, decided Benjamin was close enough to Boris to count. Boris had no known children. He was survived by a wife, two nieces, and a nephew (my dad), all of whom have now passed away. Insofar as Boris lives on in this world, it is through his art and through my name.

I brought “The Bullfighter,” which I can only assume was Boris’s masterpiece, with me from Canada when I moved to the US. It’s my reminder of a home full of memories that’s been sold; of holiday dinners under its presence amid heirlooms now scattered. It’s also a reminder of Boris himself, my enigmatic namesake, who also made the journey to a new country.

But who was Boris, really? As the world went into COVID-19 lockdown, the loneliness of quarantine, plus the lack of other things to do, increased my urgency to find out. I scoured the internet for records but mostly came to dead ends. He was an artist, I knew that; now I wanted to find evidence of his artist’s soul. Finally, in a roundabout way, I stumbled upon a clue: an obituary of my great aunt mentioned a brother, “Mr. Bruce Mack of St. Louis, Missouri.”

Was my great uncle Boris Macrovitch, also known as Barucci, also also known as Bruce Mack? Yes, it turns out, he was. This master of reinvention, upon moving to the US, apparently threw off his Russian bearskin and took on the most all-American name he could think of, while still remaining true to his initials.

With the name “Bruce Mack” at my fingertips, I was able to find his obituary. From the St. Louis Jewish Light, Sept. 9, 1981: “Bruce Mack died Aug. 28 at Jewish Hospital, following a brief illness. He and his wife operated Barucci Originals in Olivette for 22 years. Mack was known for his framing of pictures and restoration, as well as his artistic ability.”

It now seems oddly fitting that I was named after Boris even though my name isn’t Boris. After all, Boris wasn’t entirely named Boris either. He was Baruch in Hebrew, Boris in Russian, Bruce in American, and Barucci in art. Like Walt Whitman, who I imagine he read on the road to America, Boris was large, he contained multitudes.

I’m glad I’m connected to him, even though we never met. When you’re named after someone, in some strange way, you’re a continuation of their story. It may take decades, even a global pandemic, for you to try to pick up where that story left off. But it’s always there waiting, with some meaning to convey that it’s up to you to interpret.

I admire the fortitude it must have taken to start a business and achieve success as an artist in another country. But although I can speculate, a number of questions remain unanswered, probably forever: Why the new name? Why the move? Why Barucci? Why St. Louis? I’m not sure I’ll ever unravel the mystery of Great Uncle Boris, the Italian master from Odessa. But I’ll do my best to honour his name and keep his artwork in a place of pride.