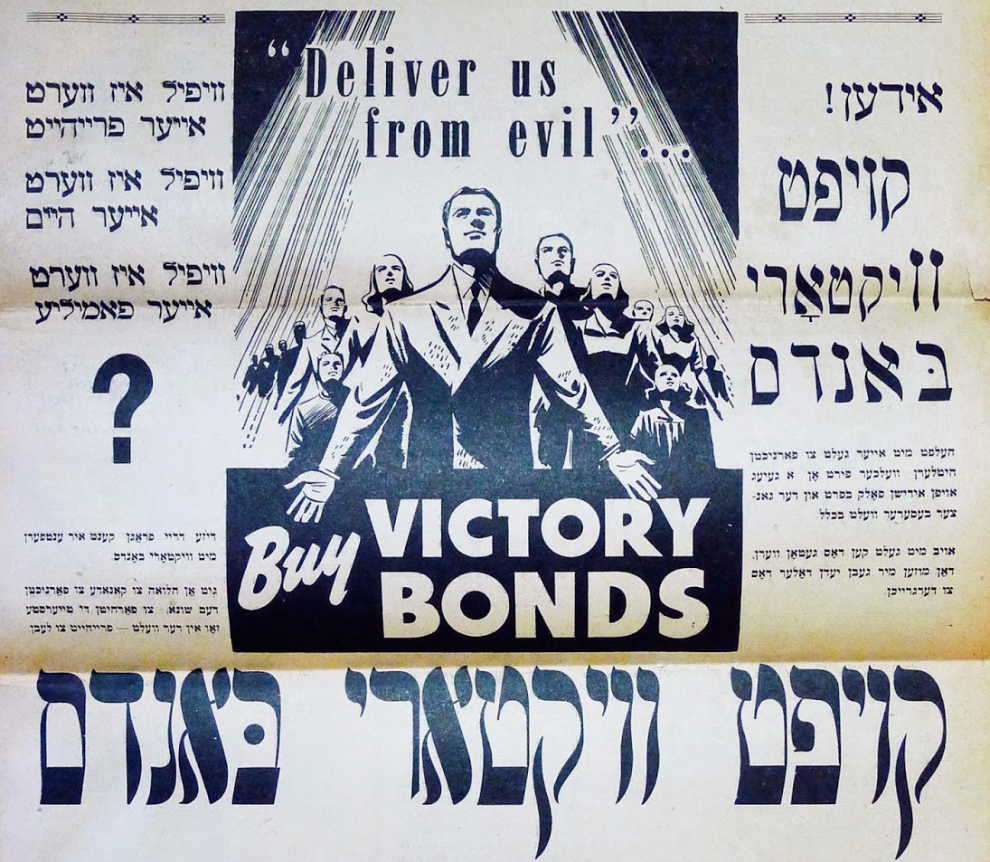 “Yiddish” and “Glory” are two words not often joined. Ironically, when Yiddish first comes to mind, we likely think of what Yiddish itself criticizes with that glorious word schmaltz. Schmaltz literally means rendered chicken fat, in which form it is delicious. But figuratively, schmaltz refers to phony sentimentality: show tunes written by committee. A 2019 Guardian headline, “I didn’t want any schmaltz in this Fiddler on the Roof,” is a headline precisely because schmaltz is what we expect from most Fiddlers on the Roof.

In 2018, an album of rediscovered Yiddish anti-fascist music was released into our (supposedly) post-Yiddish, post-fascist world. If critic Lionel Trilling’s observation that “the essence of art is unexpectedness” is correct—which it is—then Yiddish Glory, the album’s title, strikes the perfect note. We don’t expect to hear a Yiddish song called “Mayn Pulemyot” (My Machine Gun). But here it is, with lyrics written by a Jewish Red Army soldier during the Second World War:  “I lie beside my machine gun / And softly sing a Yiddish tune.”

We associate Yiddish with weepy, overfed milkmen who can’t control their families; not shtetl avengers machine-gunning Nazis. The Yiddishist Max Weinreich famously said, explaining the contempt held for Yiddish in Yiddish, a shprakh iz a dialekt mit an armey un flot: "A language is a dialect with an army and a navy." Despite being the official language of Siberia’s Jewish Autonomous Oblast, Yiddish never achieved the pomp that comes with having its own flag and border. Yet half a million Jews, many speaking Yiddish, fought for their lives under the banner of the Soviet Union.

Under the banner of the 2019 Marvin and Lillian Goldblatt Lecture series, Drs. Anna Shternshis (who unearthed the songs) and Psoy Korolenko (who composed the music) spoke about and performed Yiddish Glory at McMaster University on October 23. The audience wasn’t witnessing some ancient reenactment of a long-dead language. Our city’s own Yiddish-language newspaper, Yiddishe Shtime de Hamiltoner (Jewish Voice of Hamilton), was published into the 1940s. My father used Yiddish to communicate with our Moldovan-born nanny in the 1980s. Even today, Yiddish-fluent Soviet veterans still march on Victory Day in Brooklyn and Jerusalem.

Erev Second World War, there were roughly 11 million Yiddish speakers worldwide. Scholar Ruth Wisse writes: “Hitler’s war against the Jews was simultaneously a war against Yiddish, which was the creation of European Jewry and the main repository of its modern culture.” After the war, six million Yiddish speakers remained. Their language was then repressed as subversive in the Soviet bloc, scorned as a relic of exile in Israel and ground into schmaltz in the West. But imagine: without the fascist interruption, an additional five million Yiddish speakers would have continued to speak and sing the mame-loshn (mother tongue) in Europe’s lost Ashkenazi heartland.

Author Michael Chabon was inspired to write The Yiddish Policemen’s Union by an outdated traveller’s phrasebook he found, its advice on how to say “I will call a policeman” in Yiddish now made horribly useless. In an essay on the novel’s counterfactual origins, he writes: “The countryside would retain large pockets of country people whose first language was still Yiddish . . . A surprisingly large number of these people would be my relations. I would be able to visit them, the way Irish Americans I knew were always visiting second and third cousins in Galway or Cork.”

Very conceivably, some of these lost European Yiddish speakers would have visited us, and we could hear Yiddish spoken in downtown Hamilton today. In 1941, half of Hamilton's Jews identified Yiddish as their first language. What if those numbers had been sustained with new migration? Laid-off Bundist steelworkers would order a topl topl and kibitz at Tim Hortons. Waves of Galitzianers and Litvaks would replenish our aging, gentrifying stock with radical old-country Yiddishkeit. But though a new readership for Yiddishe Shtime de Hamiltoner was not to be, their unborn spirit can still inspire.

The yekke Walter Benjamin wrote, in weighty German: “In every era the attempt must be made anew to wrest tradition away from a conformism that is about to overpower it.” To paraphrase him, in crude Yinglish: “We must wrest ‘Tradition’ away from the schmaltz that is about to turn it into a show tune.” Yiddish glory lives on in more than just lecture halls and alternate histories. It lives on in our kishkes: our guts, should we choose to remember those who lived by them and spilled them.