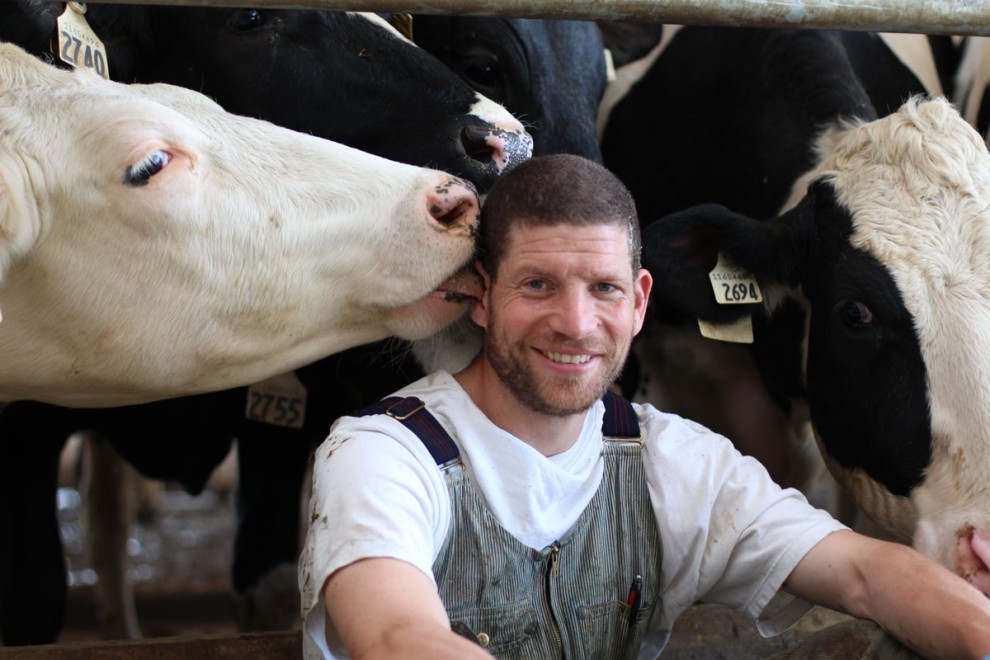 My grandparents arrived in Canada from Czechoslovakia in November of 1938.  At that time, Canada was only accepting refugees who were willing to work in the mining, forestry, or agricultural industries. One of the reasons my grandfather, Joe Loewith, chose the dairy industry as his vocation in his adopted land, was that he felt that with agriculture, your success was dependent only upon your own effort.  You would succeed or fail by the sweat of your own brow.

While that may have been true in 1947 when he bought his first farm, agriculture today is integrated, interconnected, and efficiency driven.  Every product grown or produced is part of a system that brings nourishment from the field to the fork.  When it works well, the system is all but invisible.  And it has worked well for over 2 generations.

But the COVID-19 pandemic has, for the first time in decades, caused a disruption in the food supply chain, and allowed consumers to finally see that flour does not appear on the shelves by magic; that behind every litre of milk, there is a cow, and behind every cow is a farmer.

So for the first time in memory for many people, the grocery store had empty shelves.  And at the same time, stories were spreading of tomatoes and lettuce being plowed under, potatoes being left to rot, and milk being dumped down the drain.  It is understandable that there was an outcry.  “Why would the store limit the number of bags of milk I can buy when farmers are dumping milk?”  “How is it possible there is no meat in the cooler section?”

There were two massive changes that occurred to the food system at the same time.  The first was the overnight devastation of the hospitality and food service industries.  Restaurants, convention centres, hotels, were all shut down.  This represents a significant portion of the food industry.  Tim Hortons is the largest purchaser of cream in Ontario.  And when Tim Hortons purchases cream, they buy it in large 20 litre bags that fit into their custom cream dispensers.  The packaging lines that create those bags of cream for coffee, or the 20kg bags of shredded cheese for pizzas, or the large containers of chicken wings for game night, can’t be changed overnight.  There is no retail market for food produced and packaged in this form.  So we have an excess of food, but no immediate way to get it to the market in the form that is required.

Because these food service industries were no longer taking product, dairy farms were asked to dump milk until the market readjusted.  On our farm, we were told by the marketing board to allow 2 days of milk, 40 000 litres, to go down the drain.  I can’t tell you how emotionally difficult this was for our family.  Not just because of the work that goes into producing that food, but because as a family, we remember what it is to be hungry.  Throwing away food is like burning books.  It is fundamentally wrong.

Many were asking why the milk wasn’t donated to food banks.  And in fact, an additional 100,000 litres was donated to Ontario food banks, on top of the 1 million litres that are donated each year.  However, the volumes that go into the food service industry, and the packaging that the processors can provide, are not viable for the food banks.  The food banks are not set up to take 25kg blocks of butter, or have the refrigeration for tens of thousands of litres of milk.  So, for two days, our milk flowed into the gutter.

The second phenomena that occurred almost simultaneously was panic buying.  As stores struggled with social distancing and increased cleaning regiments, people began emptying shelves in the fear that supplies would run short.  At its peak, retail grocery sales doubled their historic levels.  They have now flattened out around 20-30 per cent above norms.

My grandmother often told us “if you don’t have your health, you don’t have anything.” And food is inextricably linked to health.  If some good comes from this event, let it be that Canadians gain an appreciation for our country to be able to feed itself.  Agriculture in Canada adds over 100 billion dollars to the economy.  Farmers, transporters, processors, and retailers are working every minute of every day to make sure the shelves are full.  Let the last few months remind us of our past, and that food sovereignty it vital to a free nation.

Ben Loewith is a third generation dairy farmer. The Loewith family has been milking cows in Copetown, Ontario for 73 years.