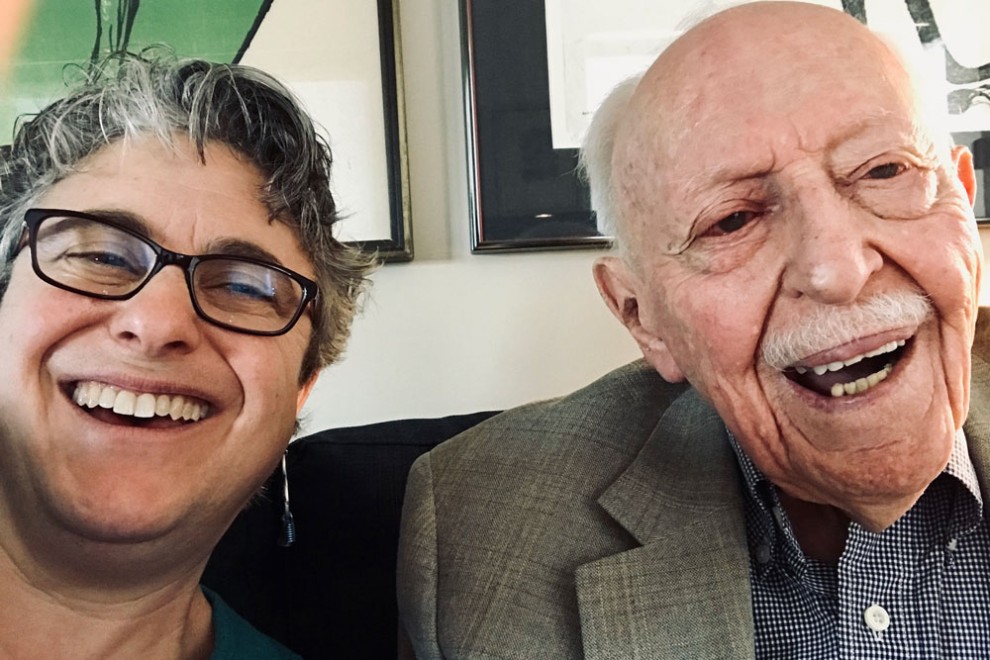 My mother, who lives in Toronto, attended a series of lectures this past fall - given by our very own Rabbi Baskin at Holy Blossom Temple. Having moved to Toronto over the summer, Rabbi Baskin wasted no time getting involved and offering to do what he does best. When I visited him recently at his new home, he reminisced fondly about his beloved Hamilton Jewish community. If I could summarize for you what we talked about, I’d say “You can take the Rabbi out of Hamilton, but you can’t take Hamilton out of the Rabbi!" We got together shortly before his 99th birthday. "Rabbi Baskin," I said, “You are looking very well and you will soon turn 99. What are your secrets to living a long and healthy life?” I confessed to him that I’d been invited to write an article for the Hamilton Jewish News on that topic. In true Rabbi Baskin style, he wrote the article for me. Here is what he had to say:

When I reached 98, my family urged me to forsake Hamilton for Toronto. It was a heartbreaking decision. After all, Hamilton was my community where I had served a congregation and the Jewish community for 60 years.

It was where my children were born and reared and where Marjorie and I shared 56 happy married years. It was where my fondest hopes were realized. Isn’t Hamilton where I belonged until the end?

But logic and cogent argument suggested otherwise—and I will celebrate my 99th birthday in Toronto, a metropolis engulfed by countless shining spires that reach heavenward.

I am now ensconced at The Russell Hill retirement home. It is a comfortable, well organized residence where two-thirds are women. They manage their walkers with astonishing agility. I’m holding out as long as I can.

My two lectures a month on a variety of themes have been well received, as have been my brief talks on the meaning of the Jewish holidays. I guess that a rabbi finds enough to keep involved wherever he is.

I have been told that in the monthly residents’ bulletin of forthcoming events my name is mentioned as the next occupant of suite 706. Evidently some residents anticipated an elderly gentleman with a long white beard, black vestments and a haughty manner. They were disappointed when I arrived looking, talking and dressing like everyone else.

I am asked, “How do you achieve old age?” I don’t know but suggest that you choose your parents very carefully. It might also helpful to follow the advice of Hillel who declared, “In a place where there are no men, try to be a man."
In addition, there is the advice of the Talmudic sage Ben Zoma who asked and answered four questions:

Who is wise? He who learns from everyone.
Who is rich? He who is satisfied with his lot.
Who is strong? He who can control his emotions.
Who is honoured? He who honours others.

There are also these criteria for measuring success:
— If you can find the resources, regardless of age or position, to keep your mind alive, vital, active and curious.
— If you are able to get along in mutual understanding with your spouse and your children.
— If you are able to accept the good and the bad in life with equanimity and are not  made arrogant by the former or embittered by the latter.

Finally, there is the quotation from the prophet Jeremiah that Moses Maimonides, 800 years ago, found the best guide for the achievement of character, “Thus says the Eternal One:  Let not the wise glory in their wisdom, let not the mighty glory in their might, let not the rich glory in their riches; but let those who glory, glory in this...that I am the power that makes for love, justice and righteousness on earth, for in these things I delight”.

I extend my fondest wishes to my friends and acquaintances in “The Ambitious City."

On the occasion of Rabbi Baskin’s 99th birthday, we in Hamilton wish him continued health and happiness, strength and wisdom … until 120!